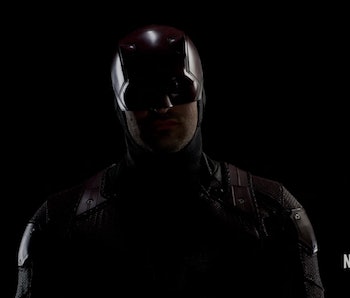 On Tuesday, Marvel dropped a scintillating promotional image for Daredevil season two, featuring two of the Man Without Fear’s most fearsome adversaries: Elektra and the Punisher. It looks like Jon Bernthal will don the Punisher’s iconic leather trench coat and skull-painted shirt, and Elodie Young’s Elektra getup looks both incredibly functional and bad-ass and remarkably non-sexualized.

The promo image brought the hype, but Marvel didn’t leave it at that. Later on Tuesday, they dropped a thirty-second clip of the heroes (and anti-heroes) suiting up, with Daredevil sheathing his trademark sticks, Elektra her deadly sais, and the Punisher, well, the Punisher just jams the magazine in a really big gun.

As the trailer shows the characters sliding weapons into place with satisfying schunk sounds, each one gets a soundbite.

“If I take a night off, people get hurt,” Daredevil says.

“If you don’t get what you want by day, you take it by force, at night,” Electra hisses.

“I think that this world, it needs men that are willing to make the hard call,” the Punisher barks, although we’re not completely sure they didn’t just mix in one of Shane’s lines from The Walking Dead for that bit.

Daredevil season two comes out March 18, but get you can get a little hit of your leather-clad action fix with the teaser below.