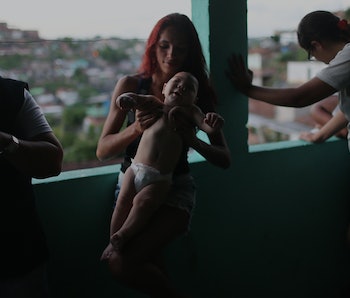 As the Zika virus continues to spread across Latin America and the Western Hemisphere, UNICEF has teamed up with Google to analyze massive amounts of data and visualize Zika outbreaks as they happen.

Google has also given UNICEF a $1 million grant for outreach and awareness campaigns, and partnered with local YouTube medical personalities.

Proper education about the Zika virus is important, especially with conspiracy theories and misinformation running rampant through affected communities and casual observers alike.

On the ground, resources are stretched thin, so organizations like UNICEF need a concrete way to prioritize outbreaks. That’s where Google comes in. The company is devoting some of its engineering and data analysis muscle toward creating a platform to aggregate and visualize data from a number of sources into a coherent map of Zika’s spread. Google’s engineers and data analysts will look at traffic, weather, and travel data to get an idea of outbreak-prone areas and help direct UNICEF’s resources to where they are needed the most.

NGO and tech companies alike often rely on open source data to visualize different trends, but mining through the massive amount of information on the internet is an ambitious goal for many organizations. Fortunately, partnering with Google’s massive network means UNICEF will be able to cache in on the tech giant’s infrastructure of analysts and engineers. Google says the partnership and outbreak-mapping program is being “prototyped” for the Zika virus, but it looks like it could become an invaluable tool for future epidemics.

The easiest piece of open source data for Google, of course, is search information. Check out the map below, and watch the outbreak spread through people searching for information on it.

Back in October, the virus was barely a drop of water in the ocean for most of North America, but was already making quite an impression on Venezuela and Colombia. Mapping search data and predicting trends doesn’t necessarily correlate to severity of the epidemic, but it could let Google and UNICEF know where to target public information campaigns to reach the largest amount of people.

More like this
Science
6.16.2022 10:00 AM
Climate change and air pollution are wrecking children’s health, a landmark review reveals
By Tara Yarlagadda
Innovation
6.25.2022 10:00 AM
9 veggies that are healthier cooked than raw
By Laura Brown and The Conversation
Innovation
4 hours ago
Robots are ready to get touchy-feely
By Sarah Wells
Related Tags
Share: