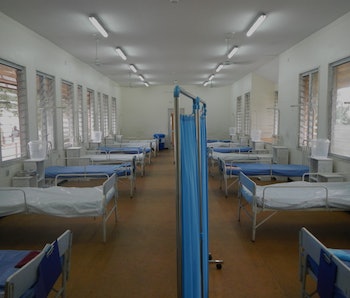 When it comes to dealing with the super-virulent Ebola virus, containment is key. And the worldwide response has been pretty commendable: efforts to educate virus-stricken communities, distribution of protective equipment to healthcare workers, and careful handling of victims have all contributed to the apparent eradication of the disease from many West African countries. Our efforts haven’t been enough, however, when dealing with one very sensitive subject: burying the Ebola-stricken dead.

According to The New Republic, the wealthy citizens of Sierra Leone are finding ways to skirt the strict Ebola burial laws in order to bury their dead according to traditional customs. In one sense, it’s hard to blame them, considering how swift and sterile the mandated procedures are: when a family member dies of Ebola, it must not be touched, and the body is immediately taken to a specified burial zone by a trained team, swabbed for the virus, and burned, all within 24 hours — hardly any time to pay respects to the dead. In Muslim families, a body would be typically be cleaned and perfumed then taken to a local mosque before being wrapped in a white cloth. Christian families also close the eyes of the dead.

Unfortunately, to keep the population safe and eradicate the virus entirely, citizens have had to let go of those long-held traditions. Ebola is at its most virulent immediately after death, and it’s still not known how long the virus stays alive after its host has died. If it’s any indication, the World Health Organization has noted that male Ebola survivors carry the virus for up to seven weeks in their semen — a testament to its persistence.

Breaking the country’s National Emergency Response Center’s burial guidelines can get you arrested, especially as the country is still under a state of emergency, but certain wealthy citizens — including several high-profile figures — don’t seem to be deterred, especially as fewer new cases are being reported. Add that to the general mistrust of Western medicine that’s so prevalent in the population, and you’ve got a country that, despite its great strides in containing the virus, is still very much at risk.

As Daniel James, NERC’s supervisor for safe and dignified burial, said to The New Republic, “All it takes is one or two bad burials and this thing can restart.”

More like this
Mind and Body
Jan. 31, 2023
Why Is My Skin Worse in Winter? 5 Conditions Dermatologists Watch out For
By The Conversation, Jeffrey Chen and Sonal Choudhary
Mind and Body
12 hours ago
Why Won’t My Cough Go Away? Doctors Explain Why This Symptom Lingers
By Katie MacBride
Mind and Body
Feb. 2, 2023
Meet the Scientists Who Want to Make Medical Devices Eork for Everyone, Finally
By Miriam Fauzia
LEARN SOMETHING NEW EVERY DAY.
Related Tags
Share: