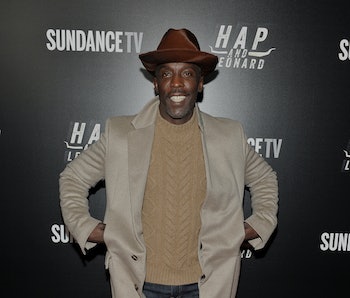 Michael K. Williams is a busy dude, but this week he found the time to pop into Entertainment Weekly Radio — which is a thing, apparently — and let details slip about his involvement in director Paul Feig’s new Ghostbusters movie. The news comes ahead of the first trailer for the movie that will drop next week, and though Williams didn’t reveal any spoilers about the plot he did manage to praise the new ghostbusting lineup while revealing that we might actually see an old green favorite in the reboot as well.

Here are the kind words Williams had to say about working with Kristen Wiig, Leslie Jones, Melissa McCarthy, and Kate McKinnon:

“I play the FBI agent who works for the mayor … our whole thing is, we’re going to tell the people it was a flash in the sky and ‘Run along little women with your ghosts, we got this.’ That was a dream job. They’re at the top of their game, man. I had the pleasure of working with Kristen Wiig and Kate McKinnon on a show on IFC called Spoils Before Dying. So, I had a relationship with them already. Leslie Jones, you meet her once, you feel you’ve known her your whole life. She penetrates any walls or any barriers you may have, she goes right through that, right to your heart chakra. And Melissa, she’s just a gem. I have so much respect for these ladies.”

So Williams will be one of the Walter Peck-esque antagonists in the new movie. More importantly, he seems genuinely humbled to be working with such comedic talent, and it also seems like the “Run along little women with your ghosts, we got this” tone of the movie might be a smart reaction to a lot of the haters out there who are none too pleased about the movie’s all-female cast for some reason.

But Williams also explained how he loved working with another sloppier more, um, dead costar, as well. “I’m not going to lie, working with Melissa, and Kristen, and Kate, was really dope,” Williams said. “But I got to work with Slimer, dude. Like Slimer!!! I’m in a scene with Slimer! I’m a huge Ghostbusters fan and it was a dream come true.”

So besides the cameos from the original lineup we can expect Slimer to make an appearance in the new Ghostbusters movie too. Or can we?

There were rumors last year about Slimer’s involvement in the reboot — even with the added bonus that he’d be voiced by Homer Simpsons himself, Dan Castellaneta — but the rumors were quickly refuted by Feig on his Twitter page. Is it possible that Feig was only being cheeky and shooting down Castellaneta’s involvement while technically not denying the big green ghost’s inclusion in the movie? Seems likely.

Still, Slimer has been conspicuously absent from a lot of the marketing tie-ins that have leaked, including the newly re-introduced Ecto Cooler, Slime Twinkies, and toy sets. Maybe we’ll actually have to be surprised going into a summer blockbuster for once.

Slimer may or may not be in Ghostbusters when it hits theaters on July 15.

More like this
Entertainment
Jan. 27, 2023
Robert Eggers' Nosferatu remake will reunite him with his best collaborator
By Eric Francisco
Entertainment
Jan. 18, 2023
Matt Reeves just revealed a mind-blowing new detail about Cloverfield’s secret backstory
By Eric Francisco
Gaming
Jan. 25, 2023
Everything you need to know about Forza Motorsport
By Joseph Yaden
LEARN SOMETHING NEW EVERY DAY.
Share: