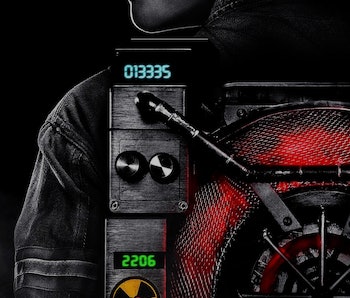 We can’t wait for director Paul Feig’s upcoming Ghostbusters reboot, and we couldn’t be more excited for the movie’s new lineup made up of kickass and hilarious women. Kristen Wiig, Kate McKinnon, Leslie Jones, and Melissa McCarthy are all great, and the ladies-first spin on ghostbusting is a fresh take on reviving an old franchise. Nearly the whole lineup from the 1984 original will appear in undisclosed cameos, and even Tywin Lannister himself, Charles Dance, will show up to most likely villain-up said busting of ghosts. There’s a lot to look forward to when the movie hits theaters on July 15, 2016. And therein lies the rub. The problem lies in everything we’ve seen so far. The marketing behind the movie is, in a word, terrible, leading us to believe the newest incarnation of Ghostbusters has a bit of an identity problem.

What the upcoming reboot hasn’t done so far is separate itself in a meaningful way from Ghostbusters 1984. Yes, the reboot is still six months away, and we’ll undoubtedly get to chew on the various details of the new movie when a teaser trailer comes out, but as of right now the new Ghostbusters movie has failed in letting us know exactly what kind of movie it is.

So, what movie is it? Well, obviously it’s a reboot to the 1984 original. Duh. But at this point do we really know what this movie is? If we had no idea what the concept of busting ghosts was about and we had no idea about “who you gonna call” and no clue about the legendary comedic performance that is Bill Murray’s Dr. Peter Venkman, could we legitimately get a sense of what Ghostbusters 2016 is at this very moment if we hadn’t already seen the original Ghostbusters thousands of times?

This kind of feigned familiarity is an increasing problem with the bevy of sequels and reboots that have popped up to put new or continuing twists on recognizable properties. However badass and life-changing the teasers and trailers for The Force Awakens were for Star Wars die-hards, it just seemed like quick-cutting gobbledigook that didn’t convey a lick of sense about what The Force Awakens was even about. Our own Hannah Margaret Allen, a former Star Wars newbie, admitted all the Millennium Falcon awesomeness amounted to “just a bunch of stuff flying by,” adding, “It’s not compelling when I look at it.”

And that’s exactly what’s wrong with the Ghostbusters reboot so far. To his credit, Feig has done his best to stay vocal and introduce details from his movie, mostly on his highly active and entertaining Twitter account, but it’s mostly boilerplate. The reveals began as easy fan nods: Here are the new jumpsuits. Here are the new proton packs. Here’s the new Ecto-1. Here’s the new lineup of Wiig, McKinnon, Jones, and McCarthy.

That followed with what was the introduction of, well, another lineup shot of the new Ghostbusters standing in front of green smoke. It’s a great look, aesthetically speaking, and sites pored over it — ours included.

That precipitated another lineup hero shot later in December of, again, the crew looking awesome next to an overturned fire truck in an image that nevertheless told us absolutely nothing about Ghostbusters itself. It’s almost willfully failing the movie because all we’ve seen so far is just the four new ‘busters standing in front of things.

Nowhere does the Ghostbusters marketing get more puzzling than in the character posters released in mid-December. The harsh black and white imagery mixed with gadgets featuring neon hued accents is, again, aesthetically awesome. But what kind of movie is it trying to advertise? It could be a gritty action movie. It could be a sci-fi drama. Is the movie these posters are advertising even a comedy?

At least the original had enough wherewithal to sell its outrageous and absurd storyline of disgraced scientists battling hordes of ghosts that include a gigantic man made of marshmallows with an appealing and humorous mystery that compelled people to answer a question posed to them. The reboot’s posters don’t even frame the famous Ghostbusters tagline with a question. Instead of “Who you gonna call?” it’s simply, “Who you gonna call.” It seems the only identity the Ghostbusters reboot has right now is a disconnected referential relation to the original.

Other recent reboots and sequels like Creed — and even The Force Awakens — soldiered on with new stories and iconography while referencing the originals. By now, Ghostbusters 2016 has the famous No-Ghost logo and four actors standing in front of a series of different settings. If something is as promising as the Ghostbusters reboot it deserves to stand for more than just recycled symbols and borrowed ideas, at least in a marketing sense.

So who you gonna call? Someone to make us care about this movie again.