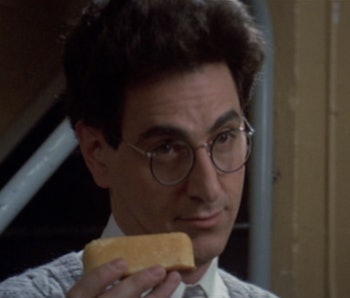 Remember when Twinkies were discontinued and everyone freaked out for a second? Dogs and cats living together: mass hysteria. America is a great place. But since then, the Hostess cream-filled snack with an infinite shelf-life has made a comeback, on the shelves and on the diabetes causality charts. And now it looks like there’s a brand new Twinkie tie-in to the new Ghostbusters reboot that we can eat and wash down with the newly confirmed Ecto Cooler.

Nerdist posted a tweet from ENM Sales & Services — a marketing company that helps new media stay on brand and all that kind of thing — of a new, green slime-filled Twinkie treat they’re calling “Key Lime Slime.” It’s a definite missed opportunity to call them “Key Slime Pie,” but we’ll let it slide. They look semi-disgusting, but we want to eat all of them immediately.

Take a look for yourself:

This is kind of perfect. Hostess probably saw all the buzz that Oreos were getting by releasing bizarre flavors like cinnamon bun and red velvet and their very own key lime cookies and thought, “Hmm, how can we get weird but also stay hip with the kids?”

Some lowly and dejected Hostess employee sitting alone in his apartment with boxes of Twinkies probably threw on an old Ghostbusters DVD one night and watched the iconic pastry scene between Ernie Hudson, Dan Aykroyd, and Harold Ramis. He remembered a new flick was in the works and the rest is green cream-filled history.

Unfortunately, these Twinkies aren’t 35 feet long and don’t weigh 600 pounds. That’s a big Twinkie, but these ones are just regular-sized.

Bring a few boxes of Key Lime Slime Twinkies to the theater with you when director Paul Feig’s Ghostbusters drops on July 15.

More like this
Entertainment
Sep. 26, 2022
Christian Bale reveals the secrets of his “weird” transformation in Amsterdam
By Jake Kleinman
Science
Sep. 24, 2022
Is a fact always true? A philosopher explains how to spot the difference
By Peter Vickers and The Conversation
Science
Sep. 23, 2022
Ancient DNA reveals the shocking scale of Anglo-Saxon migration
By Jennifer Walter
Related Tags
Share: