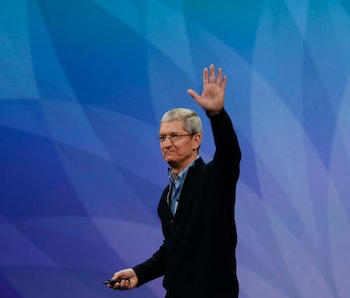 Plenty of CEOs have jumped onto the Apple bandwagon already in its case against the FBI, but none have yet put their money where their mouths are. Reports on Thursday suggest that they will now: Google, Amazon, Facebook, Twitter, and Microsoft will apparently file amicus briefs on Apple’s behalf.

When the CEOs of these companies have issued their public support, it’s often seemed that they’re doing so either out of business motivations or out of obligation. Facebook’s Mark Zuckerberg, for instance, when asked directly about the Apple case, responded: “We’re sympathetic with Apple on this one.” But he went on to explain himself, and in his explanation drew lines in the sand to separate himself from Apple CEO Tim Cook.

Ex-Microsoft CEO Bill Gates, however, did not: Gates actually said that Apple should assist the government. No less, his former company will join the party.

Amici curiae literally means “friends of the court,” but in this case it may more represent “enemies of the court.” Regardless, now that — as of today — Apple has officially resisted the court order that compelled it to assist the FBI, Apple’s going to need all the friends it can get. These briefs, therefore, should actually help: The California judge who issued the order will have to read and consider these statements.

For Apple, the case hinges upon whether or not compliance would be an unreasonable burden. If these companies express their belief that it would, and especially if they go so far as to say that a government win would eventually result in unreasonable burdens for their own business, then these briefs ought to go some ways in persuading Judge Pym that the All Writs Act cannot compel Apple’s assistance in this case.

In addition to these technology corporations, civil and security rights advocates are joining the fray: Amnesty International, the American Civil Liberties Union, and the Electronic Frontier Foundation will also submit their own amicus briefs. The public, on the other hand, remains predictably divided: a high-stakes case like this one is by-nature polarizing. In a Pew poll released this week, 51 percent of respondents said Apple should unlock the iPhone to assist the FBI. Meanwhile, 38 percent said that Apple should not unlock the phone to ensure the security of its other users’ information. Just 11 percent didn’t have an opinion.

More like this
Gear
Jan. 19, 2023
Why Apple's rumored smart display could be doomed from the start
By James Pero
Gear
Jan. 18, 2023
Apple’s new HomePod improves on the original in every way
By Raymond Wong
Culture
21 hours ago
These 50 cool things for your home have fanatical Amazon reviews
By Christina X. Wood
LEARN SOMETHING NEW EVERY DAY.
Related Tags
Share: