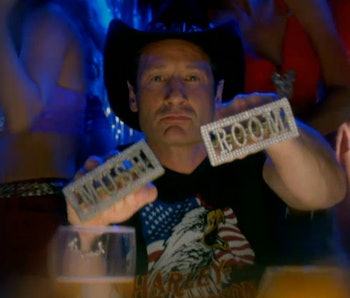 I can only presume that a small, diehard percentage of the viewers who have made it this far in the new X-Files miniseries care about what’s coming up on tonight’s season finale. There was a certain majesty to the entropic, nearly unintelligible, placebo-shroom-tinted madness of last week’s episode, but it mostly arose from the fact that it was one of the most aggressively misbegotten episodes of anything to hit television in some time — hauntingly so. It can’t be a mistake that Fox aired it during the Grammys, having switched the episode order of the season at the last minute. Imagine if that tangle of pseudo-patriotic, milquetoast gobbledygook had aired as the second episode. It seems possible no one would even be talking about the possibility of new episodes if that were the case.

TV nostalgia and reboot culture are on the rise; there’s no denying it. Whether or not fans feel apprehensive about their favorite franchises being resurrected, they are still going to watch to figure out what is going on; chances are the station or streaming service will make out well financially just on the backs of our initial, sometimes morbid curiosity. Sign off whenever you want to, guys — this shit is going to keep coming. Pretty soon we’ll be like the morbidly obese humans on the WALL·E ship, getting reboots of shows from the previous year beamed into our VR goggles.

So of course this thing will probably keep going, unless Chris Carter has the good sense to pull out and accept that he has relatively little to add to the franchise. These mythology episodes — including, presumably, tonight’s finale — retread ground the show has walked before, and have been increasing since approximately Season 5. The strange combination of clear fan service (fulfilling the “types” of episodes, self-aware humor, playing with the audience’s hopes about Mulder and Scully’s relationship) and more “contemporary” ideas, like the off-putting terrorist plot line in last week’s episode, is a lethal one. More than anything, it’s resulted in confusing episodes that seem at war with themselves in terms of tone and focus.

Perhaps, as in the case of our ol’ buddy Lucas and Star Wars, The X-Files could be handed off to other directors. A new movie franchise to this end could be a reasonable idea, with dense, tightly plotted scripts that work more on a standalone basis, and work toward more satisfying conclusions. The formula of hour-long plots that lead to a suggestive nowhere — the X-Files way from the beginning — seems like it has run its course.

The question remains, though: how long the can series can persist with these actors? Are there suitable replacements? An origin story-like reboot with younger actors is hard to imagine, even though people are trying. Can anyone channel their deadpan, slightly stagey charm? Even they don’t seem exactly to be hacking it these days: Duchovny’s wry, slightly louche portrayal of Mulder in the new series feels halfway toward Hank Moody, whom he portrayed for a full eight years on Californication. Do we want a seedy, post-sex-addiction Mulder? Maybe, but they’d have to go further with it, and stop pretending it’s more of the same old, oversized-suited Mulder. Without the fractured, eccentric charm of Duchovny and Anderson, it’s pretty difficult to conceive of caring about The X-Files as a brand.

This year’s entire six-episode series has felt like a vestigial contribution to the franchise. It’s more hard evidence that TV reboots of this variety are bound to be impotent, or at least a severe disappointment. They are plagued by pressure to fulfill certain conventions, which forces writers and directers to find odd pockets to push the plot further. Also, the shows often have to work around the schedules of stars who are almost too famous to be doing it, as in the case of the confused, one-character-at-a-time Netflix Arrested Development follow-up. We have to stop investing time speculating about and grin-and-bearing-it through these patent cash cows, which usually feel phoned-in no matter how tasteful the creators attempt to be.