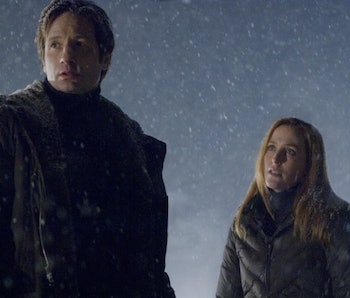 The X Files: I Want to Believe — the second X-Files movie, and last installment in the franchise before the current Fox reboot — has the quality of one of the later, more raggedy cases of Sherlock Holmes. It’s a one-off adventure, in which a bearded Fox Mulder is rescued from obscurity to help solve a case that, though weird, does not deal with the central mythology of the show at all. He’s slow on the uptake — a bit out of practice — and jumps into the occult action like a hungover Philip Marlowe, trying to step to it and knock out the thug who just broke into his apartment.

Ultimately, the experience of traipsing around snowy fields with new believer-skeptic duo Amanda Peet and Xzibit, and pedophile clairvoyant priest Billy Connolly, doesn’t solve all of Mulder’s problems. Nor does it fully fix a professionally and emotionally dissatisfied Dana Scully’s. But it does, ultimately, result in our two heroes being able, presumably, to fully close the FBI chapter of their lives and move on. Mulder no longer resents his experience in the Bureau so much, and seems happy, ultimately, to dig back into a domestic life with Scully. Scully returns to surgery and helping children with incurable diseases and deformities with élan.

Of course, the film’s final moments also boast a passionate kiss, with the camera whipping around the hard-boiled-agents-turned-lovers with Titanic-like fervor. For some devotees, it was beautiful, fan-fiction-y release; for more, it was the corniest thing yet seen in the history of the franchise. Unfortunately for them, though, it was seemingly its final moments.

Now The X-Files has returned in Fox form, and as the miniseries wears on (we’re halfway now) it seems increasingly like a vestigial addition to the annals of the series. Mulder and Scully are estranged but professionally functional again. (And why? It makes no professional sense.) They are flirting tenuously — a bit awkwardly — particularly in Monday night’s “Mulder and Scully Meet the Were-Monster.” But we have, we know, two more Cigarette-Smoking Man episodes yet to come, and the implication is: more big revelations! But the first episode — the only full-stop “mythology” episode so far — was a bit of a seemingly aggregated garble, and it’s hard to imagine us learning anything we don’t know, or would satisfy any latent desire as fans. We should know by now: the inherent nature of the X-Files narrative is a shaggy dog story. What will this ending possibly look like?

I Want to Believe is not what most would call a “good movie.” Chris Carter wasn’t happy with it, and it got widely panned. Yet it had a nice modesty to it. The final setting of the hidden Russian-owned lab felt Brazil-inspired, and Anderson and Duchovny are as charismatic as ever. In a way, its “one last hurrah” approach and Carter’s attempt to make a coherent, stand-alone mystery story, were an admirable ways to work toward wrapping things up.

So I fear that whatever fan service-y conspiracy jabber Carter is going to try to cram into these final reboot episodes is going to take us a few steps back, to a place that is inferior to that hammy but perversely satisfying Gone With the Wind kiss. If I Want to Believe was a quick, semi-titillating last bow, the new X-Files series is starting to feel like a half-ass jump right back in the old muck that wore itself out over the show’s last three seasons.

Neither solution is perfect. But Carter’s going to have to be really creative to make these last three installment seem edifying in any way, and not like a weird reunion tour to pay off some mortgages. Maybe that lame Hollywood pandering was the best way to go out.