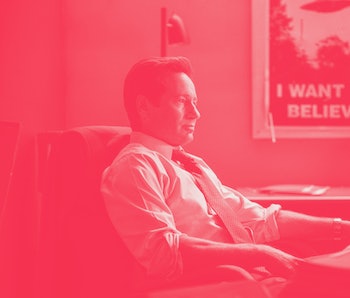 With the latest episode of the X-Files relaunch, Chris Carter and writer/director Darin Morgan imagine Fox William Mulder experiencing a mid-life crisis. Luckily, it was also a comedic episode and the best of the new season thus far. After an unimpressive start, the show offered us a madcap and often self-referential episode that found Mulder and Scully on the hunt for a lizard-like Were-creature, which they believed was responsible for a number of deaths in the forest near a dingy motel.

Unlike last week’s much more serious outing, this new case takes us to truly unexpected places and includes a long existential graveyard talk with Flight of the Conchords’ Rhys Darby (the were-creature in question), a crooked, pill-popping psychiatrist, and most of all, Mulder not taking a case too seriously for the first time in a very long time. He begins the episode by uncharacteristically slacking off and grumpily thumbing through old X-Files, finding that many of them are not so “unexplainable” in 2016.

After decades of ardent belief, a sardonic Mulder is inclined to finally dismiss it all as bullshit. “I’m thinking maybe it’s time to put away childish things,” he says to Scully, throwing pencils into the I Want to Believe poster of their refurbished basement office. Sure, the government may be reverse-engineering alien technology and experimenting with eugenics in order to turn the world into a totalitarian state, but Sasquatches and mothmen? How silly!

Such a drastic, moody change can only be explained by assuming that our craggier, post-Californication Mulder is having some Indian Summer of doubt. Another evidence of this is his brazen flirtation with his ex-flame Scully, whom he wistfully watches sleep in her hotel room. (The context of the episode makes this much less creepier than it sounds.) There is also the matter of a vividly imagined sex scene between Darby’s character and Scully, which is an entirely different matter.

During his tête-à-tête with Darby in the graveyard, we find Mulder dipping back into the sauce, chugging whiskey from the bottle as the two drunks debate Hamlet, giving the mopey scene a somewhat existential, but still mostly farcical, bent. Ultimately, the episode doesn’t take itself seriously enough for us to believe in Mulder’s loss of faith.

This necessary “questioning” phase is quickly wrapped when Mulder witnesses Darby’s transform into the Were-Monster, which reaffirm his faith in the unexplained and illogical. It is still unclear if and how this reaffirmation of Mulder’s outlook on life will play into the season’s greater conspiracy. Will Mulder double down on cracking the conspiracy behind all conspiracies as the season has been teasing?

We presumably have only three more episodes to find out. And while I’m ready for more Cigarette Smoking Man, it is becoming increasingly hard to see how the show will wrap up this strange six-episode project in a satisfactory way.