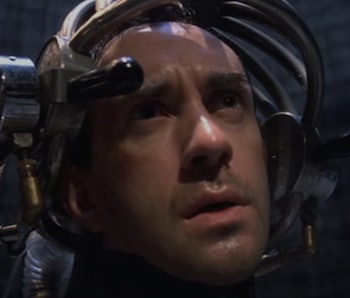 Brazil is not the kind of sci-fi epic you can watch as a pre-teenager. Ex-Monty Pythoner and polarizing visionary director Terry Gilliam’s greatest film doesn’t function as a kids movie like Star Wars — it’s way too nightmare-ready. It falls just short of being the kind of canonical science fiction film nerdy parents pass on to their offspring. Monty Python fans watch it to check off the list of the biggest post-Python projects by the group’s members, and slightly older sci-fi devotees — ones getting into the neo-noir school and checking for RIYL Blade Runner titles — sing its praises. People who recall when the movie hit theaters in 1985 no doubt remember it as the veritable, cult-film-from-the-jump flop it was: a highly ambitious, confusing film for no apparent demographic, which made back less than two-thirds of its 15 million dollar budget.

But as Gilliam kept making movies — and ambitious, winding, cerebral sci-fi epics only became more popular — Brazil’s reputation snowballed. Outside of the cult fan base, many modern directors of films, both loosely speculative and overtly sci-fi, attest to the influence of the film on their work, and visual homages in these movies’ architecture, camerawork, gadgetry, and character sketching abound.

Of course, the elements of Gilliam’s film themselves were largely borrowed, pasted together to form a sprawling, ambitious, engrossing mess of a movie, and cut with a distinctly, pitch-black, Pythonesque sense of humor. The most common reference point for the movie is Orwell’s 1984; the famous Gilliam quote is that the movie was “1984 for 1984.” But this is mixed with the shadowy noir aesthetic that Blade Runner had co-opted three years earlier. One reviewer also commented on the likenesses between the film’s atmosphere and Carol Reed’s famous post-war crime film The Third Man. It’s particularly visible — if not more so — in the likeness the drab, rundown metropolis of the film bears to Reed’s Kafka-esque, bombed-out Vienna.

There were many obvious Brazil semi-copycat films that followed. The movie influenced the grotesque, post-apocalyptic-Sweeney Todd world of Jean-Pierre Jeunet’s and Marc Caro’s Delicatessen in 1991, the shadowy, unreal cities of ‘90s experiments like Dark City and The Crow, and the 500 false endings of Spielberg’s 2001 A.I.

And Brazil continues to infringe on sci-fi more and more; there’s no indication that it will be stopping anytime soon. More recently, the seasick, semi-supernatural visual world of Iñárritu’s Birdman has found commonality with the twisted, claustrophobic geography of Gilliam’s film, and featured a similarly stunned protagonist wandering through a world that seems to be heaving up and splitting in two all around him. Last year’s Jesse Eisenberg-starring The Double was frequently and sometimes dismissively compared to Brazil, to director Richard Ayoade’s great dismay.. In Bong Joon-ho’s Snowpiercer, also, the juxtaposition of noxious British upper-crust types (see: Tilda Swinton’s character) with abject poverty and steampunk-y machinery is distinct Brazil-ian; one would be hard-pressed to discern a clearer reference point.

Also, it’s worth noting: There’s a Terry Gilliam cameo and heavy references to the bureaucracy of stuffy offices in Brazil in Wachowski’s totally batshit Jupiter Ascending from this year. I mean, come on:

Perhaps we’ll even see its imprint on the next Star Wars film — Episode VIII, due out 2017. The film’s director Rian Johnson — who made his name with semi-hallucinatory, stylized mind-benders Looper and modern noir Brick — has espoused his love for Gilliam’s work and Brazil in particular.

Here’s another Johnson quote from io9:

“I discovered Brazil my freshman year of college, around the same time I discovered [Fellini’s] 8 1/2, and they’re obviously very different movies but they both cracked my mind open in a specific way. I’ll probably fumble it when I try to explain it here, but they both opened up the potential for intimacy through bigness. All the visual opulence of Brazil was not just spectacle, it was all one very small and relatable human emotion, writ large.”

In the seedier and more hallucinatory corners of the Star Wars universe, one can see room for unexpected, Gilliam-esque touches, and hopefully Johnson will be interested in taking more chances of this sort. Whether you like or dislike The Force Awakens, it would be hard to argue that there is not room for a few riskier ideas to be injected into the new SW franchise’s vastly improved but extremely traditionalist mise en scène.

Science fiction, like it or not, continues to combine and refine tropes that go back a long way in film, TV and literature. Often, this is still to pleasant effect — did you watch Childhood’s End? Brazil’s particular, odd distillation of themes and visual reference points remains one of the truly iconic moments in the genre’s cinematic history. Speculative movies would not be where they are — and where they are going — without it.

Now enjoy a classic Brazil scene, and one of Robert De Niro’s greatest performances of all time, below.