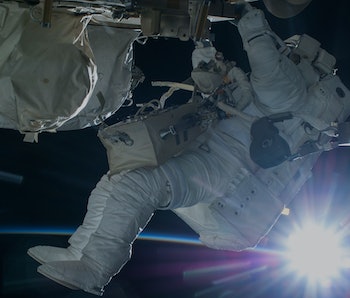 Nursing might be the hottest job of the 2016, but February was the month for aspiring astronauts. NASA opened up those applications to the general public back in December, and more than 18,300 people applied before Thursday’s deadline. Congratulations: Childhood You would be proud.

The rush was close to triple the applications received in 2012 — the last time the space agency was looking for a new astronaut class. And it’s more than double the previous record of 8,000 in 1978.

Space is so hot right now.

“It’s not at all surprising to me that so many Americans from diverse backgrounds want to personally contribute to blazing the trail on our journey to Mars,” NASA administrator Charlie Bolden said in a statement. “A few exceptionally talented men and women will become the astronauts chosen in this group who will once again launch to space from U.S. soil on American-made spacecraft.”

Bolden is glossing over the real reasons why astronaut applications are up: NASA spent much of 2015 talking to the public about its aggressive plans to send astronauts to Mars by 2040.

If that isn’t enticing enough, those plans aren’t just for the sake of an Xbox-type achievement to just land, plant a flag, and go home. NASA wants to establish permanent outposts on Mars. It plans to use the moon to do that.

And then we can hit on what else is going on in the world of space travel: Europe and a ton of other countries want to build bases on the moon; private spaceflight companies are ramping up their own rocket and spacecraft technologies to send people out into orbit; space mining is becoming a thing; and on and on.

Back to the present day: NASA will be spending the next 18 months interviewing and selecting candidates for its 2017 astronaut class. That doesn’t mean you’re automatically in — that just gets your foot in the door as a candidate. NASA whittles the pool down further over the course of two years of initial training — including spacecraft operation, spacewalking skills, Russian language, and much more.

Finally, if you complete the training and become an official astronaut, you’ll probably be assigned to work on one of four different spacecrafts: the International Space Station, Orion (oh hey there, Mars), or one of two commercially designed spacecraft being built right now.