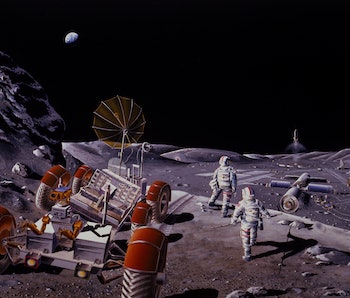 The legislative bill for the SPACE Act of 2015 has passed both houses of Congress. Any day now, it will head off to the Oval Office for President Barack Obama’s signature. If it becomes a law — and it most probably will — the SPACE Act (the U.S. Commercial Space Launch Competitiveness Act) will have big effects on how humans conduct space travel operations.

The first major thing the law would do is give private spaceflight companies (SpaceX, Virgin Galactic, Blue Origin, etc.) an extended eight-year buffer before government rules kick in to regulate innovations and technology standards. Government regulations are enacted to reduce the risk of something bad happening during a commercial spaceflight. That’s not an entirely bad idea, especially when you consider how many privately-launched rockets and ships have blown up in the last couple of years.

Of course, that’s the price of R&D. You don’t get better at something unless you’ve tested it out multiple times, and that’s exactly what Elon Musk, Jeff Bezos, Richard Branson, and other billionaire space oligarchs are trying to do: Get better at spaceflight so that they can finally meet government standards. The regulatory reprieve — now extended to September 2023, will allow these companies some more time to learn without fear of reprisal.

NASA Administrator Charles Bolden has emphasized the need for private companies to (literally) take off and play a more prominent role in space travel and exploration. For spaceflight to move forward into the 21st century and become a bigger part of our lives, NASA will need to start handing the reins off of some operations to other entities that have the capital to invest in launches and pull things off.

The second part of the bill — about space resource rights — is much more crucial. The law would provide companies with property rights for resources found and mined from asteroids and other rocks floating around in space. The SPACE Act is the first piece of U.S. legislation to address the issue of natural resources behind Earth’s orbit — and it basically says, “finders-keepers.” Title IV of the law defines ‘space resource’ as “an abiotic resource in situ in outer space.” That means pretty much anything that someone can find a use for.

While the law specifically forbids ownership of asteroids and planets — which would be in violation of international treaties anyways — it paves the way for companies to begin making plans to mine asteroids, and even the moon, for resources. NASA has already received proposals for how people might go about landing a robot on the surface of a near-Earth asteroid and dig into it for resources.

What resources exactly would people be looking for? The answer is water. Water isn’t just an important resource for keeping humans alive. It also has a strong potential for use as a rocket fuel. If humans currently want to travel to other worlds, they have to carry all their fuel with them, creating storage constraints and also necessitating more fuel in order to lug all of it around. But if we’re able to mine different places in space for water, we could refuel ships on the go.

There’s even water on the moon — perhaps billions of tons of it — sitting below the rocky surface. NASA itself is actually developing two different missions that will explore how to mine it out and store it, and at least a few companies like Moon Express and Shackleton Energy Resources are also developing technologies for such operations as well.

Water mining on the lunar surface suddenly transforms the moon into an essential stopping point for any crewed ships heading towards Mars and beyond. As I’ve mentioned many times before, the moon will play a crucial role in helping us to send astronauts to Mars. NASA is looking to use the upcoming Asteroid Redirect Mission as a proof of concept for pulling giant rocks off the surface of near-Earth asteroids and putting them in lunar orbit. The practical reasons why are unclear, but I strongly suspect that if NASA is expecting to use water as a jet propellent in the future, it is looking to use the moon as a hub for water storage. This might not just be limited to mining water out of the ground; it might also extend to keeping plenty of rocks in lunar orbit from which water can be easily extracted.

Water is basically the most important resource we’ll be looking for and using when space travel finally becomes a normal way of life for human beings. And the SPACE Act is the first step toward turning the solar system into our own vast sandbox — where we race around for buried treasure before anyone else can get to it. As the prospect of getting astronauts to Mars becomes more likely, we can expect to see the moon transform from a beacon of discovery into a continent attracting attention from industrialists across the globe.