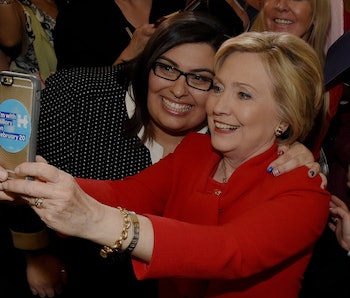 Apple is currently duking it out with the FBI over the right to keep their devices encrypted, and the two democratic Presidential candidates have decided they’re staying the hell out of this one.

Sanders called it a “very complicated issue,” while Clinton went with “difficult dilemma,” but neither Democratic Presidential candidate was willing to come down on one side or the other during a town hall debate hosted by NBC and Univision on February 18.

Earlier this week, Apple CEO Tim Cook wrote an open letter in defiance of a court order to program a “backdoor” in the iPhone’s software so FBI investigators could get data off of the San Bernardino shooter’s phones. Other tech companies have been quick to rally around Cook, saying that the precedent the court order would create could completely wreck the integrity and security of their devices, leaving them open to hackers.

Moderator Jose Diaz Balart directly asked Sanders “Whose side are you on?”, after introducing the conflict between Apple and the FBI.

“I’m on both,” Sanders replied, saying that Cook had a “very important point to be made,” but that he still worried about the possibility of another preventable terrorist attack. “So I think there has got to be a balance,” he said, before coming the closest of either candidate to saying something partisan. “But count me in as somebody who is a very strong civil libertarian, who believes that we can fight terrorism without undermining our constitutional rights and our privacy rights.

Clinton, as well, stayed firmly on the middle ground, though she’s had some very strange ideas about encryption in the past.

“I see both sides. And I think most citizens see both sides,” she said. “We don’t want privacy and encryption, you know, destroyed. And we want to catch and make sure there’s nobody else out there whose information is on that cellphone of the killer.”

It’s understandable for Presidential candidates to try to keep their hands clean of a highly-charged issue like this, but many people don’t see the issue as particularly two-sided.

Encryption is vitally important to keeping devices secure. Edward Snowden, the NSA whistleblower who was granted asylum in Russia, has said that a “backdoor” like the one the FBI is requesting could make it possible for other, non-government hackers to break into an iPhone 5c in minutes.

Regardless of the implications of the Apple versus FBI conflict, most of the Twitterverse agreed that Sanders and Clinton were overly blasé in their answers.

Some felt that Sanders, in particular, missed an opportunity to once again undercut Clinton to the left and take a stand with personal privacy.

Still, as the marathon campaign season continues, with the two Democrats closer than expected, it’s no surprise that both candidates are sticking close to the middle on controversial issues like government surveillance.

More like this
Gear
Jan. 19, 2023
Why Apple's rumored smart display could be doomed from the start
By James Pero
Gear
23 hours ago
Nissan’s Convertible EV Concept Looks Like It’s Straight Out of Tron
By Jackson Chen
Gaming
Feb. 2, 2023
E3 2023 Start and End Dates, Publishers, and Schedule Predictions
By Joseph Yaden
LEARN SOMETHING NEW EVERY DAY.
Related Tags
Share: