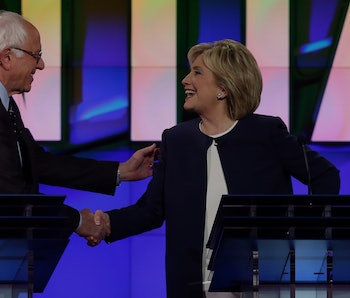 So, I’m sitting there watching the latest GOP debate — for some reason. I suppose mostly for entertainment purposes at this point. But, this isn’t about partisanship. I can’t believe there are, also, so many Democratic debates left, especially considering it’s a foregone conclusion who the nominee is going to be. Hillary Clinton is gonna have a box next to her name and the new Star Wars is gonna be awesome. Okay. Great.

This is about how the election is already making me want to break Twitter, pull out Trump’s hair, and take whatever Morpheus pill will let me sleep till next December. We, as a nation, just passed the one-year mark on November 8th. Okay, that’s right: We still have a year of the circus ahead. Tell you something you don’t already didn’t know? It doesn’t have to be this way.

In April, the Times published an intriguing look into how we got to this place, where two-year cycles are the norm. They also lead with the image of John Oliver — a noted British expat — bewildered about the length of our campaigns. Preach, John:

You see, Mr. Oliver has been exasperated — several times on his program — because he hails from a country where the prime minister election lasts about a month. How about the other BFF of the U.S.? The recent Canadian election was 78 days — and it set a record as the lengthiest.

When I ask Professor Pippa Norris of Harvard’s Kennedy School of Government for her take on the UK and Canada’s truncated processes, she tells me, “Presidential and Parliamentary systems are so different. You’ll need to find some presidential elections that are shorter to make a persuasive argument.” Feeling like I was back in college again, I found out that Mexico’s presidential race lasts about a year and Costa Rica’s is (officially) only four months.

A little nation like Costa Rica can help U.S. citizens get a grip on reality. Not only does the election last one-eighth of the amount of time, most of it is paid for through public funding. It’s a nice place to kick off how things could be here, if only there were public will.

Ever since the Citizens United decision slapped Lady Liberty across the face, we’ve got a steep hill to climb on this one. Why does it matter, as far as election length, itself, is concerned? Well, because if candidates don’t have the ca$h, they can’t hang around for as long. There’s no limit on the length of Canadian elections, for example, but there is a limit on spending.

Here in the good ol’ U.S., limitless spending means that election lengths keep elongating. As that Times article notes, presidential elections didn’t start to fatten up until after World War II. Now they’re straight up obese, mostly because of the money that fuels them. In 2012, the presidential election sticker price was around $2.6 billion. Some say that the 2016 election may double that. If the Supreme Court won’t curtail spending, the campaigns very well might drag on for longer than they do now. Here’s what another Kennedy School professor, Dr. Matthew Baum, tells me:

The current Supreme Court has shown little interest in constraining the freedom of individuals or groups to campaign as much as they want, whenever they want. That may change one day. But in the current environment I do not see it happening.

An Accord Between Republicans and Democrats

Imagine a meeting in the Oval Office between Barack Obama, Paul Ryan, Mitch McConnell, and Harry Reid. Joe Biden is the corner watching a VHS tape of every Ratt music video ever produced while he eats his fourth Slim Jim of the day. Ryan says, “Hey guys: Let’s just agree we won’t kick things off till, say, six months before the election!” This is all about as likely as Bobby Jindal securing the GOP nomination.

There hasn’t been one of these since ‘92 — and that one literally took 202 years to pass. Oh, and you need a two-thirds majority of the House and the Senate, as well as three-fourths of the states to ratify any Amendment. If the Democrats wrote a bill saying, “We are all human beings,” Republicans would strike it down. And vice-versa. ‘Bout to get the Baum dropped on you again: “I think the short answer is that in theory we could [limit election lengths],” he says. “In practice, there is no political will to do it and there are First Amendment questions regarding the sorts of regulations that might be needed to enforce such a restricted campaign period.” Right, gotcha.

If more people knew that we didn’t have to deal with eating this shit sandwich, day-after-day, for two years straight, things could slowly start to change. If we keep feeding the beast, the legislative and judicial branches aren’t revising squat. The Supreme Court actually made things worse the last time they took a swing!

It is logistically conceivable, another Kennedy School prof, Thomas Patterson, tells me. “It would be possible to structure a five-month process, pushing the primaries closer to the November election and shrinking the time between the primaries and the conventions,” the author of The Vanishing Voter says. “That said, we could still expect candidates to be out campaigning — raising money, conducting media events, participating in debates — a year or more in advance of the first contests. That’s the cost, and the beauty, of candidate-centered campaigns.”

If something doesn’t crack, we could be looking at elections that begin the day after one takes place. Four-year cycles would mean that we would always be in a presidential election. Sound good? Didn’t think so. Turn off CNN, demand action from your congressman, and maybe start paying attention in six months or so.

More like this
Culture
6.17.2022 6:00 PM
50 years ago, Watergate changed the American political thriller forever
By Steph Green
Gaming
6.23.2022 12:30 PM
Known gamer Ted Cruz would love these 6 pay-to-win games
By Willa Rowe
Culture
7.1.2022 9:00 PM
Male celibacy has evolutionary benefits — but not for the reasons you think
By Ruth Mace, Alberto Micheletti and The Conversation
Related Tags
Share: