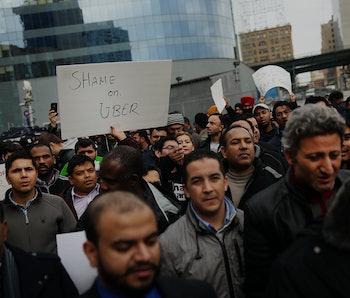 In December, Uber said everything was going great, thank you very much. Their drivers were fine, according to an internal survey they distributed, reporting an 81% satisfaction rate. But internal satisfaction reports don’t satisfy everyone — especially The Rideshare Guy, a former engineer who now drives for Uber and Lyft and blogs about the intricacies of the ride-sharing market.

The Rideshare Guy, whose name is Harry Campbell, conducted his own survey, which polled 435 drivers from both Lyft and Uber, and found some slightly different statistics — only 48.4% of his drivers said they “agreed” or “strongly agreed” with the claim that they were satisfied with Uber.

Uber has drawn a lot of flak since its start in 2009, riding the growing wave of the sharing economy in major cities. Traditional cab drivers in London, New York, and other major cities hate the service, saying it undercuts their prices and pays less in taxes.

Last year Uber drivers participated in a widespread strike protesting the company’s ever-falling rates, which dropped another 15% in New York City specifically at the end of January.

Lyft, Uber’s biggest and only major competitor, dropped their prices to match, but aside from a few cities (San Francisco and Austin, namely), they can’t match Uber’s customer demand. Interestingly, Campbell found that while 73.9 percent of drivers spent more time working for Uber, a significant amount of them (44.6 percent) would rather work for Lyft, but stick with the former service because it nets them more money.

Uber has been conducting internal driver-satisfaction surveys for years, but their methodology and results are somewhat questionable. In the beginning of 2015, Slate reported that Uber’s claim that drivers earn about the same amount per hour, no matter how many hours per week they work, was possibly flawed. Slate columnist Alison Griswold found that in New York City, Uber’s biggest market, there was an enormous level of variation in average hourly wage that the Uber survey didn’t accurately represent. The 11% response rate to the survey (drivers who responded were financially compensated) didn’t lend credibility to their “everything is great!” findings either.

“I would say right off the bat that I’m not surprised Uber released a study that said their drivers are more happy or satisfied, because it wouldn’t make sense for them to release a survey that didn’t say that,” Campbell told the LA Times. “They’re going to release data that’s most beneficial for them. They haven’t always been the most forthcoming.”

Campbell also told the LA Times that a chief complaint among drivers is the lack of communication with their parent company. One of his most popular posts is “Top 6 Ways to Contact Uber When You Need Help,” teaching drivers something many of them did not know how to do.

One of Uber’s most criticized policies is treating their drivers as contracted workers, not employees, meaning they don’t have to offer drivers the same benefits of other businesses. Seattle recently became the first city to allow drivers to unionize, although the city ordinance will face an uphill legal battle against the tech giant.

The sharing economy still exists in an uneasy grey area between traditional economic regulations and employee benefits. While Uber and Lyft offer drivers a flexible, quick way to make a reasonable wage, they’re clearly not widely viable as full-time jobs, and internal satisfaction surveys are most likely off base. So how happy is your Uber driver with his job? Less happy than the company wants you to think, but not unhappy enough to hang up the app for good.