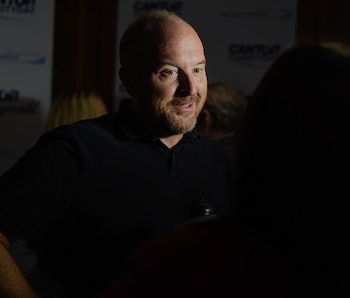 The comedians-in-shows-talking-about-comedy virus on TV is a very real thing. It may not be more rampant than other TV mini-trends, but give me nu-school true crime programming over these post-sitcoms any day. The cresting wave of pseudo-autobiographical comedian shows is certainly the fault of one man. Don’t get it twisted and blame Larry David; Curb Your Enthusiasm kept too goofy for solipsism in a way that these shows do not. The snowballing success of Louis C.K.’s Louie on FX, a show that made every comic hoping to break through into TV feel like they, too, could become an eccentric genius. Entries came in from C.K.’s erstwhile buddy Marc Maron, Tig Notaro, Rob Schneider, and yes, even Aziz Ansari (whatever you might try to argue).

Louie broke down lots of structural and tonal conventions of comedic shows, and everyone seemed to want to give doing a sloppy, dramatic-comedic experiment in this vein a try, hoping for newfound attention and first-time accolades. Series like this were cheap, after all, and made transparently writing about one’s own life seem cool. But as comedians continue to make messy little shows about sad industry professionals, Louie himself seems to be interested in making even messier shows about other things. Louie has consistently expanded to more esoteric realms with each subsequent season, but still none of its dalliances have reached C.K.’s latest two projects’ level of singularity. FX’s Galifianakis-starring Baskets and Louie’s independent web series Horace and Pete are not only the strangest projects of the writer/director/actor’s career, but also unlike most series ever.

C.K. produced and co-wrote the meandering sad clown saga Baskets, which is also — not surprisingly — in partial collaboration with Portlandia director and writer Jonathan Krisel, who (like Galifianakis) has worked extensively with Tim Heidecker and Eric Wareheim (of Awesome Show, Great Job! fame). Baskets’ ultimate fate remains to be determined, but it premiered to record-breaking ratings for the cable channel. It’s amazing to consider, as it is truly one of the oddest shows seen on cable television in some time. It takes the loose approach to character, motivations, and discomfiting situational humor favored by Tim and Eric, or the younger David Wain, and positions it within a long-form narrative format that feels much more Harmony Korine than Woody Allen.

The fact that Baskets is working commercially at all points to one of Louie’s major assets: his ability to corral with big names and crack teams to work with him. This advantage will no doubt allow him to sustain his off-beat creative agenda for some time. Being able to get talented, single-minded artists to come in on projects with him also improves and diversifies his work in a necessary way. (It is still a marvel that C.K. convinced David Lynch to act in a number of episodes of Louie.) Horace and Pete, despite the fact that it is a wholly independent, self-funded project distributed through Louie’s site, also finds C.K. is combining his own sensibility with another voice he respects. The 34-year-old Pulitzer Prize-winning playwright Annie Baker is noted as a consultant in the credits. The lines are Louie’s, but the filmed-stage-play-like realization owes something to the comically bittersweet, emotionally charged atmosphere of Baker’s work. The style nests Louie’s interest set — quotidian observations, perverse fantasies, bewildered reaction shots, character actors and actresses running amok, plainspoken musings on the fraught self-sabotaging nature of human connection — inside hers, or perhaps explores the overlap between the two.

Unlike Baskets, there is an attempt at linear logic and comprehensive character development on Horace and Pete. But it shares the former show’s disconcerting freeformness: a lack of adherence to any structural conventions episode to episode. The governing principle of Horace and Pete is that the action revolves nearly exclusively around conversations in the series’ titular Brooklyn dive bar. Also, there’s always a short, Paul Simon-backed “intermission,” C.K.’s odd wink toward the series’ self-conscious “theatricality” (if you couldn’t grasp the likeness from the rest of the show).

Yes, Horace and Pete is indulgent. And why wouldn’t it be? There’s something admirable about a person at Louie’s point in his career backing away from high-paying, high-profile ventures and trying to realize an unconventional, low-stakes idea completely on his own terms. Maybe you wish that, as in this week’s third, Laurie Metcalf-starring episode, he hadn’t assigned Louie-core lines betraying a particularly bizarre, psychosexual fantasy to a female character (see also: real-life extenuating circumstances). Despite the fact that it is coming out of the mouth of such an incredible, well-respected actress, something feels off and inauthentic, the whole time.

But if Louie and his distinctive sensibility is going to keep being a part of our lives, at least his work will continue to be thought-provoking and relatively unexpected. Even if he turns out abject failures - and “weird experimentation” as a constant becomes boring in itself — at least we’ll know we’re getting unadulterated product straight from the man himself. In the age of too much programming, it feels necessary to champion shows where the normal formulas and gambits are off the table. Given his own comments and business practices, we can assume that Louie will be charting a course entirely on his own terms for a while. He can stave off self-parody by keeping his approach diverse, and wisely integrating co-conspirators. For now, people are still interested enough for this business model to seem prudent.