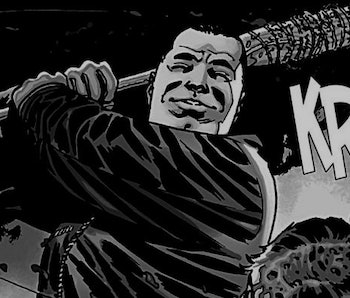 The Walking Dead has always been marked by its grim tone, and even the antagonists with the most disturbing natures — the Governor, Meryl, Gareth, and the Hunters — hurt others in order to survive. Even the Governor, who occupied The Walking Dead as its resident baddie for more than two seasons, had an albeit-warped sense of good and evil. He didn’t particularly enjoy the slaughter of innocents, though he often killed off other characters without much reason to do so. Negan, who’s been teased as the big baddie in The Walking Dead’s upcoming half-season, is another beast entirely.

Few villains in fiction exhibit glee when enacting violence on others, and those that do are always stand-outs, because they’re just so disturbing. The Joker is always idolized whenever he appears on screen, and Ramsay Snow of Game of Thrones embodies dread more powerfully than any other villain on the show. What sets these characters apart is the way they pursue and enjoy sadistic violence. Hurting others is funny to the Joker, and Ramsay Snow gets some kind of sexual pleasure from raping Sansa and torturing Theon. It’s disturbing for audiences to see villains like this play with victims onscreen because their psychology is such a departure from what most people believe is markedly human: empathy, guilt, and the strive to feel wanted and accepted.

In the Walking Dead comics, Negan is a charismatic cult leader who randomly selects one of the core survivors to execute when he first appears. After choosing Glenn, Negan beats him to death with his baseball bat (which he has nicknamed Lucille), laughing when Glenn cries out to Maggie and telling him, “You’re taking this like a champ.” Negan even tells Glenn that it’s “gross” when his eyeball pops out of its socket, and laughs some more while he finishes him off, crushing Glenn’s skull as Rick, Michonne, and the gang are forced to watch.

Does that feel like a departure from The Walking Dead’s tone? Well, it should. Although we’ve certainly watched beloved characters meet their demises on screen in past seasons, we’ve never watched someone experience waves of pleasure from watching them cry out in pain. This sadism is what separates the mythology of grim, emotionless serial killers like Jeffrey Dahmer, who was reportedly consumed with guilt and self-hatred, from David Parker Ray, who systematically kidnapped and tortured women, experiencing their desperation as part of his pleasurable experience. There is a distinct difference in fictional villains between those who see others as necessary casualties and those who truly enjoy what they do.

Negan curses like an adolescent boy and uses uncomfortable metaphors about his penis until they fall apart, and his gang of cronies alternate between admiring his brutality and fearing he might strike one of them out of boredom. What The Walking Dead has needed for several seasons now is a huge paradigm shift, away from the depressing search for a stable home among society’s ruins. It’s possible Negan might be the violent shake-up Rick and the gang need in order to become dynamic again.