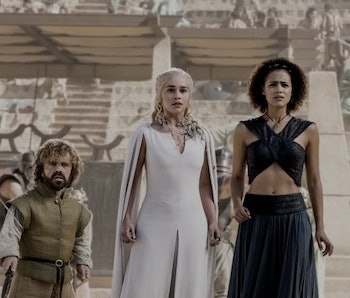 With Season 6 three months away and HBO already releasing teasers, it’s time to take a look at some of our morally-ambiguous favorites and speculate on where the new season might take them. With the White Wakers finally making noticeable waves up north, a religious uprising in King’s Landing, and Slaver’s Bay as unstable as ever, though decisions are ahead for nearly every character in Westeros and Essos. How will their moral compasses fare?

So far, Doran Martell has proved to be a refreshingly good ruler. Despite his simmering hatred for the Lannisters, who keep killing his siblings, the Prince of Dorne has refused Ellaria Sand’s numerous calls to war, as well as even the consideration of hurting Myrcella, the Lannister princess previously in his charge. He also showed great restraint in forgiving his would-be-sister-in-law’s open disrespect in court while forcefully warning her that future transgressions would not be tolerated. If Doran has an agenda, he is playing the long game for now. An all-around solid leader who truly cares for his people.

This season might see the slide from “Lawful Good” to “Neutral Good” for our recently-departed Lord Commander of the Night’s Watch. Considering that following his lawful instincts got him gutted like a catfish by his favorite intern, we frankly look forward to a less idealistic Jon Snow. With the White Walker threat looming closer than ever, keeping an eye on the bigger picture and avoiding the politics of Westeros is no longer advisable for the former Bastard of Winterfell. … Oh, right, he’s dead anyway, right? Never mind then.

We genuinely believe in Dany’s desire to do good. The mother of dragons, however, sure seems to fumble from mistake to mistake with uncanny precision. She’s publicly beheaded devoted followers begging for mercy, kept her two well-behaved dragons chained, and ridden off into the sunset instead of making the needed U-turn to rescue her team left behind at the fighting pits: Dany’s path to a better world has clearly been paved with false starts, indecision, and tense glares with Jorah Mormont — whom she still hasn’t officially forgiven.

This alignment previously belonged to Stannis Baratheon, a man whose staunch, unwavering sense of morality still did not prevent him from ordering that his own daughter be burned at the stake. But with Stannis gone (RIP, House Baratheon), this spot falls to the High Sparrow, a barefooted devout of pure conviction. With the support of the common people of King’s Landing behind him, the Sparrow’s “law” is The Seven-Pointed Star — the Westerosi equivalent of the Holy Bible. Still, having been given an army by Cersei Lannister and subsequently by targeted the royal family, it’s hard not to see a political mind at work under that literal potato sack.

Jaime’s neutrality comes from the fact that the character has taken wild swings on both sides of the fence throughout the series. Between crippling Bran, raping Cersei by their son’s corpse, rescuing Tyrion, and then promising to kill Tyrion if he ever sees him again, Jaime is a man of action. (One would expect no less from the guy who has been sexing with his twin sister since they were children.) Having now had his daughter die in his arms, we don’t see much that could keep Jaime from setting fire to Dorne at the first opportunity. Or maybe he will seek out kindred spirit Brienne in the Riverlands for some peace away from it all. Regardless, Jaime is at a truly neutral point of his arc where he could turn righteous, nefarious, or downright monstrous.

A Chaotic Neutral character is defined as an “individualist who follows [their] own heart and generally shirks rules and traditions.” Nothing defines Arya Stark better, does it? Good, evil, politics, and even family all come second to Arya. When finally given the opportunity to find her sister or half-brother at the end of Season 4, she instead opted for Braavos where she could learn to be a better killer. While Arya responded well to the Faceless Men and their death-worshipping ways, her primary motivation is still that list of people she has made it her life’s mission to kill. Valar morghulis, little one.

The law has served Cersei well. Through reliance on the rules of inheritance, she and her children have been able to usurp the throne from the Baratheons. Season 5, likewise, was her downfall because she believed herself untouchable by virtue of her position. When Cersei hysterically screams, “I am the queen!” it is because she truly believes in the power of that title. It might be crumbling around her, but it is still the only system she has ever known — and the only one by which she can play.

Many characters have asked Petyr Baelish what it was he actually wanted and his answer has always been honest and forthright: “Everything.” The perpetually-traveling Lord Protector of the Vale is the very embodiment of greed and can always be counted on to throw a wrench across the board in the hopes that it might benefit him down the line.

What pushed Littlefinger from “Neutral” to “Evil” in our book was his recent gambling of Sansa Stark, the object of his creepy obsession. Sansa was long thought to be his blind spot but casually placing her in harm’s way by marrying her off to the very family that killed her brother and mother — and then adding to the flame by telling Cersei her location — was still a shocker.

Flaying, castration, rape, mind games, and emotional torture are just some of the ways the naturalized bastard of Roose fills a slow afternoon. Until now, Ramsay’s sadistic proclivities have always mostly been for shits and giggles. But with his wife Sansa on the run, thus weakening his claim to the North, we can look forward a new side of Ramsay: pissed off. That definitely does not bode well for, well, anyone without reach of his flaying knife.