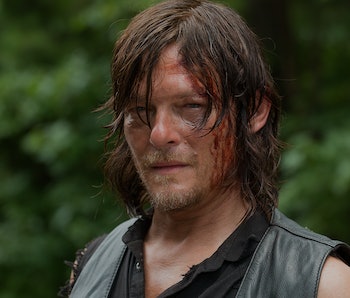 What does the four-minute preview of “No Way Out,” The Walking Dead’s midseason return augur for the rest of Season 6? Nothing good for the characters, but some exciting stuff for the audience.

Bat-wielding maniac Negan, a big part of the Walking Dead comics, is finally going down to Georgia, but the new preview doesn’t show him, opting instead to let his cronies and the show’s protagonists sound the trumpets of suspense. Negan, who will be portrayed by Jeffrey Dean Morgan of Watchmen fame, is already making life an unbearable hell for Daryl, Abraham, and Sasha. It’s clearly only a matter of time until he arrives in Alexandria to make it hell for everyone else.

But the really bad news is that Alexandria is collapsing. The quiet streets are overrun with walkers and Rick is leading a small, zombie guts-covered group out of Alexandria. What kind of condition will Alexandria be in when Daryl, Abraham, and Sasha practically escort Negan and his dangerous gang right into their home?

Though I’m exclusively a Walking Dead TV fan with not much familiarity with the comics, here’s the likely scenario:

Amidst the chaos, Daryl leads Negan’s gang into Alexandria. Seeing it overrun, they clear house — it’s Daryl, Sasha, Abraham, and a dozen BAMFs, of course they can contain it — leading to Alexandria “owing” Negan; or the power vacuum left in Alexandria allows Negan to slip into command like a glove. That’s how I personally predict Season 6 to play out.

Many fans expect Negan to brutally murder Glenn like he did in the comics. (Come on, that’s not a spoiler.) I hope he doesn’t since The Walking Dead has already played its hand with that card. But based on what the cast and crew are saying about Season 6, Rick’s group might have to dig a few graves.

Negan is truly one of the worst monsters in The Walking Dead universe, and maybe throughout all of comics. And that’s a tall order, given Marvel and DC have intergalactic genocidal dictators and supernatural warlords. Armed with only a barbed-wire baseball bat, Negan ranks up there.

The Walking Dead returns to AMC on Sunday, February 14.

More like this
Entertainment
6.24.2022 11:15 AM
Behind the scenes at “Herogasm,” The Boys’ most NSFW episode ever
By Aaron Pruner and Jake Kleinman
Entertainment
6.23.2022 4:42 PM
Obi-Wan Kenobi Easter egg gives the show’s best scene a deeper meaning
By Dais Johnston
Entertainment
6.30.2022 7:00 AM
The Boys Season 3 Episode 7 release date, time, plot, cast, and trailer for the Amazon show
By Jeff Spry
Share: