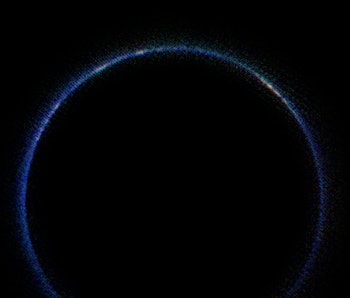 On Friday, NASA released a haunting new image taken by the New Horizons space probe during its flyby of Pluto: a look at Pluto’s atmosphere under infrared wavelengths. The result is a serene blue glow that outlines the dwarf planet in a perfect circle.

New Horizons snapped this shot on July 14 of last year as the probe was 112,000 miles away. According to NASA, the sunlight is coming up from above and behind Pluto.

Pluto’s atmosphere is thought to be permeated with a significant amount of hydrocarbon particles, which collect into a sort of haze. As the sunlight hits this smog, it jumpstarts photochemical reactions on methane and other molecules, resulting in a complex mix of other, smaller hydrocarbons like acetylene and ethylene.

The collection of smaller particles scatters the sunlight into fractured bits of light that travels at smaller wavelengths. The result is a blue color atmosphere when Pluto is viewed under infrared.

Meanwhile, the white patches illustrate sunlight that’s bounced off the smoother, more reflective parts of Pluto’s surface. As previously reported, those softer regions are part of incredibly diverse range of geological patterns found the surface of the planet.

This is just the latest image captured by New Horizons that’s been released by NASA. Back in December, we saw the sharpest photos of Pluto ever. It’s been a big twelve months for images from Pluto: On July 10, we saw Pluto’s moon Charon. A few months later, in September, NASA released some ridiculously awesome photos of Pluto. In October, Charon came back in the spotlight as we got some poster-worthy photos of the Plutonian moon. Later in October, even more images showed Pluto’s massive craters (and potential for ice).