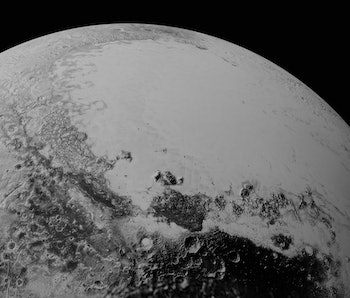 NASA acquired a bunch of new images of data of Pluto during New Horizon’s flyby of the little dwarf planet about two months ago. Most of that information is still stored onboard the probe, but the space agency is slowly starting to roll out the fantastic new images gathered during the mission, kicked off with a dump of new pictures released for public viewing.

Initial images of the flyby were highly compressed, and distorted aspects of the icy bugger. Now, we can finally see some of the more striking characteristics of Pluto’s surface, including ice flows, deeply carved valleys, mountains and dunes, and much more.

“The surface of Pluto is every bit as complex as that of Mars,” said NASA’s Jeff Moore, leader of the New Horizons Geology, Geophysics and Imaging (GGI) team, in a press release sent out Thursday. “The randomly jumbled mountains might be huge blocks of hard water ice floating within a vast, denser, softer deposit of frozen nitrogen within the region informally named Sputnik Planum.”

The dunes on Pluto are particularly important. Pluto’s atmosphere is much thinner than Earth’s, but wind-blown dunes would suggest the planet had a thicker atmosphere in the past, compelling space researchers to learn more about if and how Pluto’s atmosphere changed in the last few billion years.

NASA will be releasing more images to the public every Friday for the next several months, as well as high-resolution pics of moons Charon, Nix, and Hydra next week.

In the meantime, check out the first batch of new Pluto-porn below.

More like this
Science
8 hours ago
How the Webb Telescope is Rewriting What We Know About the Early Universe, One Galaxy at a Time
By Doris Elín Urrutia
Science
Feb. 4, 2023
Astronomers May Be on the Cusp of a “Potentially Revolutionary” Cosmological Breakthrough
By Universe Today and Matt Williams
Science
Feb. 2, 2023
Exclusive: NASA Explains How the Voyager Missions Could Live Until 2035
By Kiona Smith
LEARN SOMETHING NEW EVERY DAY.
Related Tags
Share: