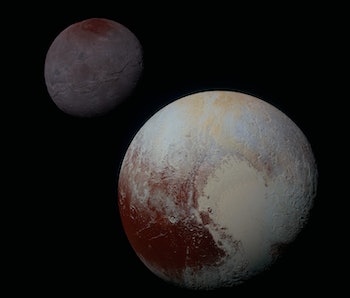 Three months ago space geeks around the world watched New Horizons perform a historic flyby of everybody’s favorite former planet, Pluto. It was the first time a spacecraft had travelled to the edges of the solar system to take high-resolution photos of the dwarf planet, giving unprecedented looks at an object more than 4 billion miles away. And while Pluto had its moment to shine, it’s time for its moon to get its government issue glamor shots.

The slow drip of hi-res Charon photos is part of the initial data gathered by New Horizons, which passed Pluto and its moons in July. And while it’ll take until next year to recover all of that data, including even clearer images of both, the next photographic highlights are giving scientists a lot to talk about.

NASA researchers assumed Charon would be cold, dead, and relatively boring, given its distance from the sun. Instead, there’s weirdness. The photos reveal fascinating geological features: craters, enormous mountains, and a consistently pocked surface. All of these details hint at Charon having a particularly violent past.

Photos of the moon — which at 750 miles wide is the largest celestial body relative to the planet it orbits — show a thousand-mile-long canyon girding its equator. NASA figures the canyon is four times as long as the Grand Canyon and twice as deep. The aspherical nature of the craggy rip along the moon’s diameter makes it look as if it were split open. The relative smoothness of the surface of Charon’s southern hemisphere suggest that the moon is constantly being resurfaced.

NASA cites possible cryovolcanism (a.k.a. cold volcanic activity, a.k.a. one of the coolest-sounding things ever) as a possible culprit for the moon’s disparate complexion. This phenomenon also means Charon may have had a subsurface ocean long ago that froze up, leading to the frigid lava to seep to the surface, causing the immense cracks.

More like this
Science
8.5.2022 12:00 PM
Webb Telescope spots Cartwheel Galaxy and more: Understand the world through 8 images
By Robin Bea
Science
8.14.2022 7:00 PM
Do aliens exist? Jupiter’s moon Europa could hold the answer
By LAURENCE TOGNETTI and Universe Today
Science
8.13.2022 10:00 AM
How the Webb Telescope could unveil the newborn universe
By CAROLYN COLLINS PETERSEN and Universe Today
Related Tags
Share: