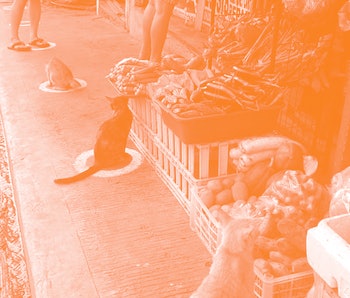 An adorable, viral tweet shows cats capitalizing on a side-effect of social distancing — sitting in circles drawn on the ground to mark where humans should stand to keep their distance.

The photos were taken last weekend in front of a store in Quezon City, Philippines, and spread across the internet when the newspaper The Philippine Star shared them this week.

Circles on the ground, meant to indicate where humans should line up for the market, were occupied instead by stray cats, who lounged for a few moments while checking out the fresh produce.

The photos bring up a curious behavior that many cat owners are familiar with: an enduring love for sitting in circles and squares. Why they do this, cat behaviorists say, can be explained by their survival instincts.

What's striking about the cats in the Philippines is that these are stray cats — meaning these strange cat tendencies we associate with living in humans homes are also common across cats living on the street.

The fact that painted circles and taped squares are just as appealing to a cat as a box, raises questions, namely: Why do they do this?

Experts have a few theories but essentially it's driven by a need to survive, explains Mieshelle Nagelschneider, a cat behaviorist at The Cat Behavior Clinic. Nagelschneider is a leading expert on cats and wrote the book The Cat Whisperer.

"You can boil many cat behaviors down to one reason and that reason is survival," Nagelschneider tells Inverse.

She explains that this peculiar behavior is related to the fact that cats are naturally drawn to enclosed spaces. Hiding is both a predatory and a predator-aversion instinct, Nagelschneirder explains.

"Out in nature, they will hide from predators in a carved-out tree stump," Nagelschneider says. "They will also hide themselves in this same tree stump to ambush their prey as part of their natural stalking and predatory behavior."

The fact that cats like hiding in boxes and other containers is well-documented. A 2014 study showed that cats in shelters are less stressed, at least in the short-term, when they're given a box to hide inside.

Even big cats have a thing for boxes — as seen in this video from Big Cat Rescue, of Tiger King fame:

Sitting inside a circle or square on the ground won't offer cats protection or give them an upper-hand on hunting. But psychologically, being able to see a border around them just feels right.

"Placing themselves in a taped circle would give a cat a sense of security and safety and, at least in their minds, an increased chance of survival," Nagelschneider says. A circle drawn on the ground, or square taped on the floor — that's "close enough for a cat," she says.

Natural selection — While many of us associate sitting in boxes with our self-domesticated cats, this behavior isn't necessarily learned. Hiding gives cats an evolutionary advantage, so it makes sense we'd see the same behavior in stray cats like the ones in the Philippines.

At the same time, learning between animals — called social learning — can also contribute to specific behaviors, leading to a mix of learned and innate tendencies.

This could be playing into cats sitting in the designated social distancing circles.

"Even though instinctual behavior of staying safe can lead to hiding behavior," Nagelschneider explains, "seeing a human stand in the circle can give a cat the idea to do the same."

"Cats instinctively have a personal comfort distance of 3 to 6 feet," Nagelschneider says, adding that cats who don't get along need to keep an even further distance.

More like this
Science
22 hours ago
Watch squealing dolphins hunt fish and snakes from their point of view
By Jennifer Walter
Science
8.17.2022 11:00 AM
These fish don’t just make antifreeze — they bleed it
By Elana Spivack
Science
8.14.2022 1:00 PM
'Gifted' dogs may share this one personality trait. Does your dog have it?
By Tara Yarlagadda
Related Tags
Share: