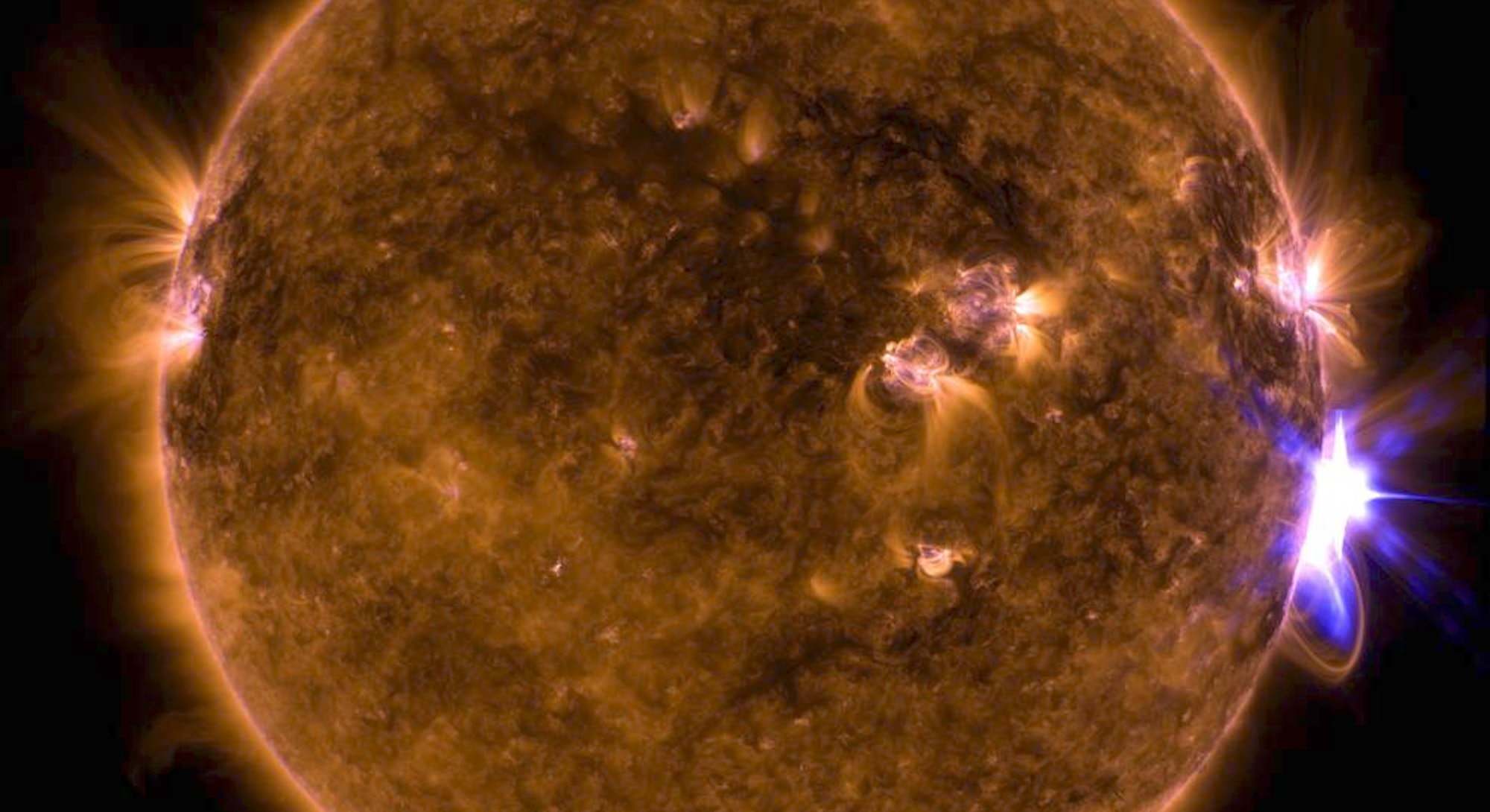 On August 7, 1972, a massive solar flare erupted from the Sun’s surface. The burst disrupted radio waves, telecommunication networks, and power systems. The solar tempest triggered an intense magnetic storm on Earth 15 to 70 hours later, The New York Times reported at the time.

Just a few months earlier, on April 24 1972, astronauts from the Apollo 16 mission had just landed back on Earth after their journey to the Moon. What scientists didn’t realize at the time was that they dodged a burst of space weather that could have had fatal consequences.

Solar flares are just one form of radiation found in outer space, but the study of space radiation is a relatively new pursuit. The field is still in its infancy, and the full extent of how it affects the health of astronauts — and how much radiation the human body can withstand during long journeys into deep space — is unknown. As we set our sights on a new era of space travel, marked by a human return to the Moon in the year 2024 and planned human exploration of Mars possibly by the year 2030, the question becomes increasingly urgent. Will space radiation be detrimental to these plans or can scientists still find ways to mitigate its effects?

What is space radiation?

Space agencies are still working to figure out the full effects of radiation on the health of astronauts, and have come up with a few solutions to mitigate these effects from a space vest to simply hiding beneath a makeshift protective box.

In its simplest form, radiation is a form of energy that can be composed of electromagnetic waves, particles, or rays. Earth’s atmosphere protects us from the harmful effects of radiation emitted in space, but once astronauts hop into a spacecraft and leave that protective bubble, they may be exposed to different kinds of space radiation.

There are three main types of space radiation. First, there is a population of energy particles trapped within Earth’s magnetic field. The field serves as a deflector for other forms of radiation coming from beyond our planet’s stratosphere.

Second, there is radiation from the Sun. The star goes through violent and eruptive weather cycles, emitting solar flares and big bubbles of plasma that shoot out into space at high speed.

NASA scientist Ian Richardson, who specializes in the environment between the Sun and Earth, tells Inverse that scientists have a pretty clear idea of the energy levels of these particles, and their spectrum. But the Sun’s weather cycle is still pretty ambiguous.

“The problem is predicting when these events occur, these explosions in the Sun are rather hard to predict,” Richardson says. “We couldn’t figure out what are the signatures of when an eruption is going to occur on the Sun very well.”

“We do not yet fully understand the effects of space radiation on the human body.”

The third kind of radiation are cosmic rays, which come from outside of the Solar System. They can originate in supernova, the explosions caused by the death of a massive star, or from supermassive black holes and various other cosmic phenomena.

The main risk of cosmic rays is not only that they have much higher energies than other kinds of radiation, but that they represent a constant battery.

“They’re more of a threat in some ways than the solar particles,” Richardson says. “It’s a constant drizzle of particles.”

Space radiation pierces through molecules of DNA, altering or permanently damaging them, according to NASA.

Some of the major health problems associated with exposure to radiation include an increased risk of cancer, changes in motor function and behavior, neurological disorders, and death. Research relating to the effects of radiation on human health is limited, considering the small pool of subjects (not a lot of people have gotten the chance to go to the Moon, after all). But the few studies that have been conducted show worrying results.

A 2016 study published in the journal Scientific Reports revealed that astronauts from the Apollo mission suffered high mortality rates due to heart disease, which may have been caused by space radiation. The astronauts who journeyed into deep space to reach the lunar surface had a 43 percent higher chance of experiencing cardiovascular issues than their colleagues who remained in low-Earth orbit.

“We’re not going to send folks out on suicide missions.”

Ruthan Lewis, NASA’s exploration systems and habitation manager behind upcoming missions to the Moon and Mars, says more research is needed before we can jump to conclusions about the effect of space radiation on long-term health.

“There’s quite a bit of many things we still don’t quite know,” Lewis tells Inverse. “We have some ideas but there’s a lot more data that we’d like to have available in research in terms of evidence for different kinds of responses.”

Right now, NASA monitors the crew onboard the International Space Station through wearable gadgets that measure the amount of radiation they are exposed to, as well as their daily performance and physicality.

To reduce radiation’s effects, the number one solution is simply to limit the amount of time an astronaut is exposed to radiation, Lewis says. “If you lessen the exposure time in general, then you will lessen the reaction,” she says.

But a trip to Mars would require at least seven months of space travel just to reach the Red Planet — and would result in up to 700 times more exposure to radiation than on Earth. In this scenario, reducing the length of astronauts’ exposure to deep-space radiation isn’t really an option.

How to combat space radiation

To overcome that problem and get humans further into space, scientists are testing different methods to mitigate the effects of radiation on human health.

One innovation may lie in what astronauts wear. The AstroRad vest is a wearable shield that astronauts can put on during their journey into space. It could help protect some of their vital organs from radiation.

The vest uses a selective shielding strategy, which targets tissues that are especially sensitive to the effects of radiation. The shielding material itself is made of a hydrogen-rich polymer, which is ideal for protecting against space-borne radiation, and increases in thickness around the organs that the vest is meant to protect such as lungs, colon, breasts, ovaries and stomach.

Gideon Waterman, the chief technology officer of StemRad, an Israeli-American startup company that developed the vest along with aerospace company Lockheed Martin, is one of the inventors behind the wearable shield.

“We do not yet fully understand the effects of space radiation on the human body,” Waterman tells Inverse. “But even though there are still unknowns in the field of space radiation effects, we do know that offering the best protection possible will be beneficial to the crew.”

The vest is set to be tested onboard the International Space Station sometime within the year 2020. Fingers crossed it works: The plan is to launch it along in July 2020 with NASA’s Orion spacecraft for a test (unmanned) mission to the Moon.

There are other, less high-tech ways to shield yourself from a sudden burst of radiation in space, Richardson says. If you are onboard the spacecraft, and you see a solar flare shooting out from the Sun, then a box fort can also do the trick.

“There’s boxes of food and water in the spacecraft supplies, build an igloo and dive underneath,” Richardson says. “That seems to be the favorite way of shielding yourself.”

Is space radiation a deal breaker?

NASA plans on sending astronauts back to the Moon as part of their Artemis mission in 2024. The first crewed mission to Mars is also in the works, with NASA’s Mars 2020 rover headed to the Red Planet in July, 2020 with the aim of paving the way for human exploration of Mars.

Over in the private sector, the ever-growing commercial side of space travel is gearing up for much more ambitious plans. SpaceX is already working on a spacecraft to launch commercial aerospace flights to Mars, carrying up to 100 passengers. SpaceX is adamant it will build a human colony on Mars as early as the year 2025.

But if the effects of space radiation aren’t fully understood, these plans may never materialize — or worse, they could be a death sentence.

“I believe we will have mitigation methods available, but will they be sufficient to totally knock out the radiation effects?” Lewis says. “I’m not sure anyone can claim that at this point. That’s still out for debate.”

Meanwhile, Richardson believes that if we want to explore deep space, then we are going to have to accept that we will be exposed to a certain level of radiation no matter what we do. “You have to keep monitoring the astronauts so they don’t receive the limit,” Richardson says. “It’s just a matter of living with it.”

What the acceptable levels of radiation exposure are is still a mystery, which makes weighing out the costs and the benefits difficult, Lewis says. As it stands today, researchers are looking at existing data of astronauts who have flown to space and been exposed to radiation, as well as gathering information from materials that have been in deep space for a long time such as previous Mars rovers, and combining that data with efforts to better predict and forecast space weather.

“We’re not going to send folks out on suicide missions,” she says. “NASA is in the business of sending people to space and returning them safely.”