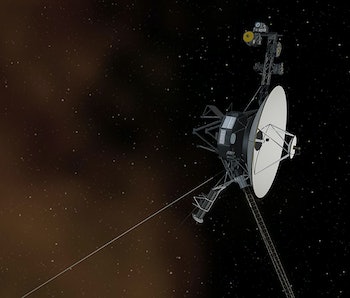 For more than 40 years, NASA’s Voyager 2 spacecraft has traveled through the cosmos under the guidance of a team of engineers on the ground.

But starting Monday, the spacecraft will not be able to receive commands from ground control until 2021. Some 11.5 billion miles away from Earth, it is on its own out there.

The radio silence is due to last about 11 months — and while it is a long time to spend alone, the reason is critical to Voyager 2's continued survival in deep space.

Voyager 2 — and many of NASA's other satellites — rely on a system called the Deep Space Network (DSN) antennas for communication between them and NASA ground control. Thing is, while this system works well, it is also more than 70 years old.

The system came to be when NASA launched its first ever satellite, the Explorer 1 satellite, in 1958. The DNS is used to communicate with an average of 30 spacecraft a day. It runs 24 hours a day, 365 days a year, and is spread out across three sites in California, Canberra, Australia, and Madrid, Spain.

But times are changing, and the space agency is gearing up for a slew of new missions to the Moon and Mars, all due to launch in the next few years. And, after more than 60 years, NASA really needs to work on its communication skills.

And it is starting with one of the antennas that make up DSN.

The antenna in question is dubbed Dss43. It is 230-feet-wide, about the size of a 20-story building, and is located in Canberra. Dss43 has been operational for 48 years — and some of its parts have never been upgraded.

Time for a facelift

To bring the antenna into the 21st century, NASA will run maintenance on some of the antenna’s equipment, as well as add new technology to the aging antenna.

Dss43 is the only one of its kind across all three sites. It is fitted with a special S-band transmitter that makes it the only means of communication with Voyager 2, as it coasts along in space some 11 billion miles away from Earth.

The antenna's location is also crucial: Voyager 2 is traveling in a downward direction relative to Earth's orbital plane, so it can only be detected from the southern hemisphere, making Australia a prime location for its communications.

During the antenna’s downtime, Voyager 2 can still beam science data down to ground control. But it will not be able to receive commands from Earth.

"We put the spacecraft back into a state where it will be just fine, assuming that everything goes normally with it during the time that the antenna is down," Suzanne Dodd, Voyager project manager and JPL Director for the Interplanetary Network, said in a statement. Assuming.

In January 2020, Voyager 2 suffered a slight glitch, when its software shut down one of its science instruments unexpectedly. NASA’s team of engineers on the ground worked to get the spacecraft up and running to its normal operations once again by sending commands up to the craft. Because of its distance, each command took about 17 hours to reach Voyager 2.

If something else were to go wrong with Voyager 2 during the next 11 months, NASA is counting on the spacecraft to be its own savior.

“If things don't go normally — which is always a possibility, especially with an aging spacecraft — then the onboard fault protection that's there can handle the situation,” Dodd said.

The mission still has about five years left in its designated timeline. And already, it has fed crucial information about our Solar System and beyond back to Earth.

Together with its sister satellite, Voyager 1, Voyager 2 is on a mission to provide scientists with a unique view of our own Solar System, looking at it from the outside.

Both spacecraft began their journeys in 1977. The speedier twin Voyager 1 made the jump into interstellar space in 2011, before it was followed by Voyager 2 in 2018.

The Dss43 antenna is expected to go back online in January 2021. Only then will we be able to talk back to this intrepid explorer once more. Until then, we hope Voyager 2 remains self-reliant.