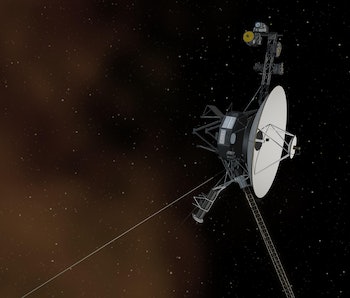 In an incredible feat of remote engineering, NASA has fixed one of the most intrepid explorers in human history. Voyager 2, currently some 11.5 billion miles from Earth, is back online and resuming its mission to collect scientific data on the solar system and the interstellar space beyond.

On Wednesday, February 5 at 10:00 p.m. Eastern, NASA's Voyager Twitter account gave out the good news: Voyager 2 is not only stable, but is back at its critical science mission.

"My twin is back to taking science data, and the team at @NASAJPL is evaluating the health of the instruments after their brief shutoff," the account tweeted.

Voyager 2 is sister craft to Voyager 1. Both have been traveling through the solar system — and now beyond it — for the last four decades. Together, they have transformed our understanding of our stellar neighborhood and are already revealing unprecedented information about the interstellar space beyond the Sun's sphere of influence.

In a statement, NASA confirmed that Voyager 2 is back in business.

"Mission operators report that Voyager 2 continues to be stable and that communications between the Earth and the spacecraft are good."

"The spacecraft has resumed taking science data, and the science teams are now evaluating the health of the instruments," the agency said.

The fix is no mean feat: It takes 17 hours one-way to communicate with Voyager 2 from Earth, which is the second furthest away manmade object in space (Voyager 1 is the most far manmade object). That means a single information relay takes 34 hours.

What happened to Voyager 2?

The spacecraft had run into trouble on January 28, when NASA revealed that it had unexpectedly — and for unknown reasons — shut down. The world held its breath.

As Inverse reported at the time, Voyager 2 went black right before it was scheduled for a maneuver in which the spacecraft rotates 360 degrees in order to calibrate one of its instruments onboard.

But the spacecraft didn't make the move. As a result, two of its systems — both of which consume a lot of power — were running at the same time, according to a statement by NASA.

The likeliest problem was that the spacecraft was using up too much of its available power supply, which triggered protection software. The software automatically turns off Voyager 2’s science instruments when there is a power overload to save on power. It only has a finite supply, after all.

As of writing, NASA hasn't confirmed or denied whether that is what actually happened. Only time will tell whether the agency ever gets an answer to what went wrong. But for now, we can all rest assured that Voyager 2's mission is far from over yet. If all goes well, it should have another five years of life left, meaning five more years of data collection from an area of space we humans have no other way of studying.