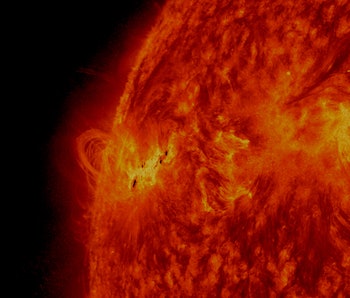 On August 20, 1977, Voyager 2 launched from Cape Canaveral, Florida. It was the first spacecraft ever designed to look at our own solar system from the outside.

At the time, there was no way to know that a spacecraft could cross into interstellar space, or if it could even survive that long a journey in deep space.

But as of last year Voyager 2 and its sister spacecraft Voyager 1 have both made the jump into interstellar space. The differences between their crossings give scientists the unique opportunity to compare data collected by Voyager 1 and 2. The data also enable scientists to observe the sun the same way they observe other stars in the galaxy — looking from outside of the boundary surrounding our own solar system. The initial results comparing the two crafts’ crossing appeared this week in the journal Nature Astronomy.

Voyager 1, the speedier craft, crossed into interstellar space in 2011. And, after more than forty years, on November 5, 2018, Voyager 2 also made the leap. The two craft pierced through the heliosphere at different locations — Voyager 1 in the northern hemisphere, while Voyager 2 crossed in the southern hemisphere.

“We certainly didn’t know that a spacecraft could live long enough to leave the bubble and enter interstellar space,” said Edward Stone, a project scientist for the Voyager mission at a press conference to announce the findings.

“We had no good quantitative idea of how big this bubble is that the sun creates around it,” he said.

The ‘bubble’ refers to the boundary that the sun creates around it and it’s attendant planets. Solar wind emitted by the sun interacts with wind coming in from interstellar space, creating a heliosphere that stretches beyond the planets’ orbits. The heliosphere also protects Earth and the rest of the solar system from potentially damaging cosmic rays coming in from elsewhere in the galaxy.

Dan Reisenfeld, a research scientist at Los Alamos National Laboratory, who was not involved in the research, says astronomers took bets on when they were going to make it through.

“Voyager’s fame came from its exploration of the planets,” Reisenfeld tells Inverse. “Then it went quiet for years because it’s just traveling through the depths of space beyond the planets.”

Voyager 2’s crossing was particularly exciting because it had a working plasma instrument onboard. Voyager 1’s instrument, unfortunately, was damaged in the 1980’s. The tool is essential in determining the transition from the sun’s hot plasma within the heliosphere to the colder and denser material that exists beyond that boundary.

Because they took place at different locations, and at different points of the sun’s magnetic cycle, the data collected by the two spacecraft are quite different. Voyager 2 revealed a much smoother, thinner heliosphere boundary, with a stronger magnetic field, than did Voyager 1, for example.

The second set of data also gave a better idea of the shape of the heliosphere.

“When Voyager 2 crossed the heliopause, it showed us that our heliosphere is not perfectly round but that it’s asymmetric,” Reisenfeld says.

Looking in from the outside

The observations made by the mission can help scientists understand how interstellar space influences the sun, and how the sun influences its galactic surroundings.

Measurements made by the Voyager mission suggest that the interstellar medium beyond the sun’s boundary is not stable, and is affected by the interaction between the solar and galactic wind. The heliosphere protects the Earth from cosmic radiation, with only about 30 percent of that radiation crossing through this protective bubble.

“By understanding the shielding effect of our heliosphere, we will have some idea of how this heliosphere changes with time as the interstellar medium changes,” Stone said during the call. “If there’s increased pressure because of some recent event nearby, that will compress the heliosphere, the radiation would be much more intense.”

Jamie Rankin, a research scientist at Princeton University’s department of astrophysical science who was not involved in the research, points out other important data from Voyager 2’s crossing.

“There were some unresolved questions from Voyager 1’s crossing, and people looked forward to Voyager 2 being able to tell the temperature out there” in the interstellar medium, Rankin tells Inverse. “The time difference allows us to have some idea about how the sun influences this region, and the solar weather.”

Voyager 2 still has some five years left of its estimated lifespan, so as it continues to explore interstellar space, it will continue to feed back measurements of the interstellar medium.

“What can we discover about our own star by looking at it from the outside in, since most of the time we study it from the inside?” Rankin says.

Rankin, who was not born when Voyager 2 launched, wrote her postdoctoral thesis using data collected from the mission. She plans to continue to use future data from the mission to answer some ongoing questions regarding our host star.

“What is the big picture? What do we look like if somebody out there was observing us remotely and looking at our star the way we look at other stars,” asks Rankin. “In some way we’re able to look back at ourselves.”