The team was scared that we would fail: A NASA mission 45 years ago changed everything

“The team was scared.” 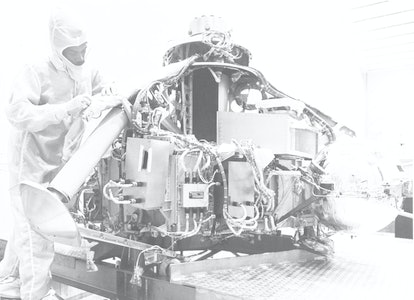 In some sense, Viking 2 had already lost out on the history-making when it touched down at Utopia Planitia on Mars at 3:38 p.m. Pacific time on September 3, 1976. The robotic probe’s sister vehicle, Viking 1, had already made the first soft landing on Mars in July and taken the first photographs from the Red Planet’s surface.

Forty-five years ago this month, we know Viking 2 would end up playing a decisive role in the dual legacy of the Viking missions.

A staggeringly difficult engineering feat for the time, the landings of those two probes on the surface of Mars still offer the blueprint for missions today.

It’s not all good, though: the ambiguous results of onboard experiments designed to detect signs of Martian life put astrobiology on hold at NASA for more than a decade.

The man perhaps best suited to speak to the legacies of Viking 2 might well be Gentry Lee. After all, he wrote the original proposal for what would become the Viking missions, and at 79-years-old, is still working full time as the Chief Engineer for the Solar System Exploration Directorate at NASA’s Jet Propulsion Laboratory.

“I have the best job that was ever created for any human being,” Lee says. “My job is engineering integrity of all the JPL missions that go away from the planet Earth. It's very cool.”

The scope of his comments widens when you learn Lee has partnered with Carl Sagan to create the original Cosmos television series and has written four novels with science fiction giant Arthur C. Clarke.

But before all that, in the early ‘70s, Lee was the Director of Science Analysis and Mission Planning for the Viking missions, with several hundred scientists and engineers working for him. It was decided there would be two Viking spacecraft.

“At that time, of course, nobody had ever landed on Mars, and the probability that we would be successful was considered to be very low,” Lee says.

When Jim Martin, the Viking project manager, was asked what he thought the probability of success might be, “he said, ‘about 75 percent,’” Lee recalls.

According to Lee, by flying two spacecraft, they could push that chance for success from three quarters to fifteen sixteenths, and they needed every chance they could get.

“The landings of Viking were probably the most difficult technological achievement of any time in the 20th century, far more difficult than Apollo,” he says.

Apollo had human beings in the loop at every part of the mission and ground controllers in near-real-time communication with the spacecraft and astronauts. But the Viking was different.

Spacecraft would need to use a heat shield and parachute to slow itself and enter an atmosphere of uncertain density, then descend and use rockets to land autonomously — using 1970s electronics — on uncharacterized terrain without any input from controllers on Earth.

“The team was scared,” Lee says when asked about the prospect of failure. “Every one of us went to bed every night saying what can we do to make sure we don't fail?”

It took the Viking team all night to run a single entry, descent, and landing simulation on the punch-card-operated mainframe computers of the day.

In contrast, “today you can run 10,000 cases on your desktop in one hour,” Lee says. The team had to be very smart about what it was that could destroy the landing. It only had far fewer simulations to run through.

Ultimately, The Viking team would take a mock-up spacecraft to White Sands National Monument and use a balloon to lift it to an altitude of 100,000 feet. The atmosphere more closely resembled Mars and tested everything out.

“Interestingly enough, no Mars mission since Viking has done the same degree of testing that we did, and they have all used our results from 1973 on sizing the parachutes, air shell, and everything else,” Lee says. “The engineering legacy from Viking was enormous.”

The two Viking spacecraft each took four instruments designed to answer one big question, Lee says, are there signs of life on Mars?

There were three biological experiments and one organic chemistry experiment, and of course, Viking 1 got to run them first. “On Viking 1, one of the biology instruments showed what you would call on the Earth if you saw it an absolute positive, another likely positive, and the third one undecided,” Lee says.

“The absence of any organic material on the surface of Mars, on any of the places that we looked, led people to the conclusion that Mars was lifeless,” Lee says. “That was a wrong conclusion.”

“What we found with Viking 1 was the absence of evidence of life — and ambiguity.”

It’s not that Lee believes there were definitive signs of life in the Viking data. Still, neither was there a careful, systematic investigation into whether the claim that Mars was, in fact, lifeless was really true. “In other words, absence of evidence is not evidence of absence. That's a very, very famous thing that Carl Sagan and I coined in Cosmos,” Lee says. “What we found with Viking 1 was the absence of evidence of life — and ambiguity.”

That’s where Viking 2 comes in. Same spacecraft, same experiments, but a different location. Perhaps the results would be different this time?

“Again, we had the same results,” Lee says. “No organic material.”

But in the final days of the Viking 2 mission, as the science team began to get a little desperate to get any additional data, Carl Sagan and others on the science team had an idea, according to Lee.

Maybe ultraviolet radiation was breaking down any ancient organic compounds on the surface. If Viking 2 could use its robotic arm to push a rock out of the way, perhaps in the soil underneath, undistributed for billions of years, there could be signs of life.

“To me, it was the most exciting part of Viking 2,” Lee says. “We took the surface sampler arm, and we pushed a huge rock out of the way, dug underneath it, took the soil, analyzed it — and got the same results.”

Lee wonders what might have been. Since Viking 2, meteor impacts in the Utopia Planitia region have exposed ice beneath the surface. That Mars might have water ice hidden beneath its russet dust was a major finding of the Mars Odyssey orbiter in 2001, Lees says, but it wasn’t even imagined at the time of Viking. If the spacecraft could dig just a little deeper, the whole history of planetary exploration might have been radically different.

“Sit for a moment and imagine it's October of 1976, and Viking 2 sampled deep and has found ice. At that moment, everything would have changed,” Lee says. “The presence of water ice would have made everybody get excited about the possibilities for continuing the exploration of Mars.”

What actually changed following Viking 2 was a long hiatus for Mars science at NASA. According to Lee, money that could have gone to planetary science went to support the big flagship program of human spaceflight — the Space Shuttle.

The legacy of Viking 2 on Mars

But NASA would return to Mars, with missions such as the Global Surveyor Orbiter and the rover missions beginning with Pathfinder and continuing, today, with Perseverance, which is currently drilling and caching soil samples for later retrieval and analysis on Earth. Unlike Viking, future scientists will not have to remain content with limited instrumentation if they obtain ambiguous results from those future studies — they’ll be able to build new tools to fit the problem.

“But in the meantime, I and many others have been working on where else other than the subsurface on Mars, might there be life in our solar system,” Lee says. Missions are being planned or proposed to visit Jupiter’s moon Europa and Saturn’s Moon Enceladus, icy but geologically active worlds with global oceans that could bring water, minerals, and energy together in the same kind of prebiotic soup believed to have led to the formation of life on Earth.

“And all of this, of course, goes back to Viking,” Lee says. “Because the primary impetus for Viking in the beginning, and everything since then has been to address the question, are we alone?”