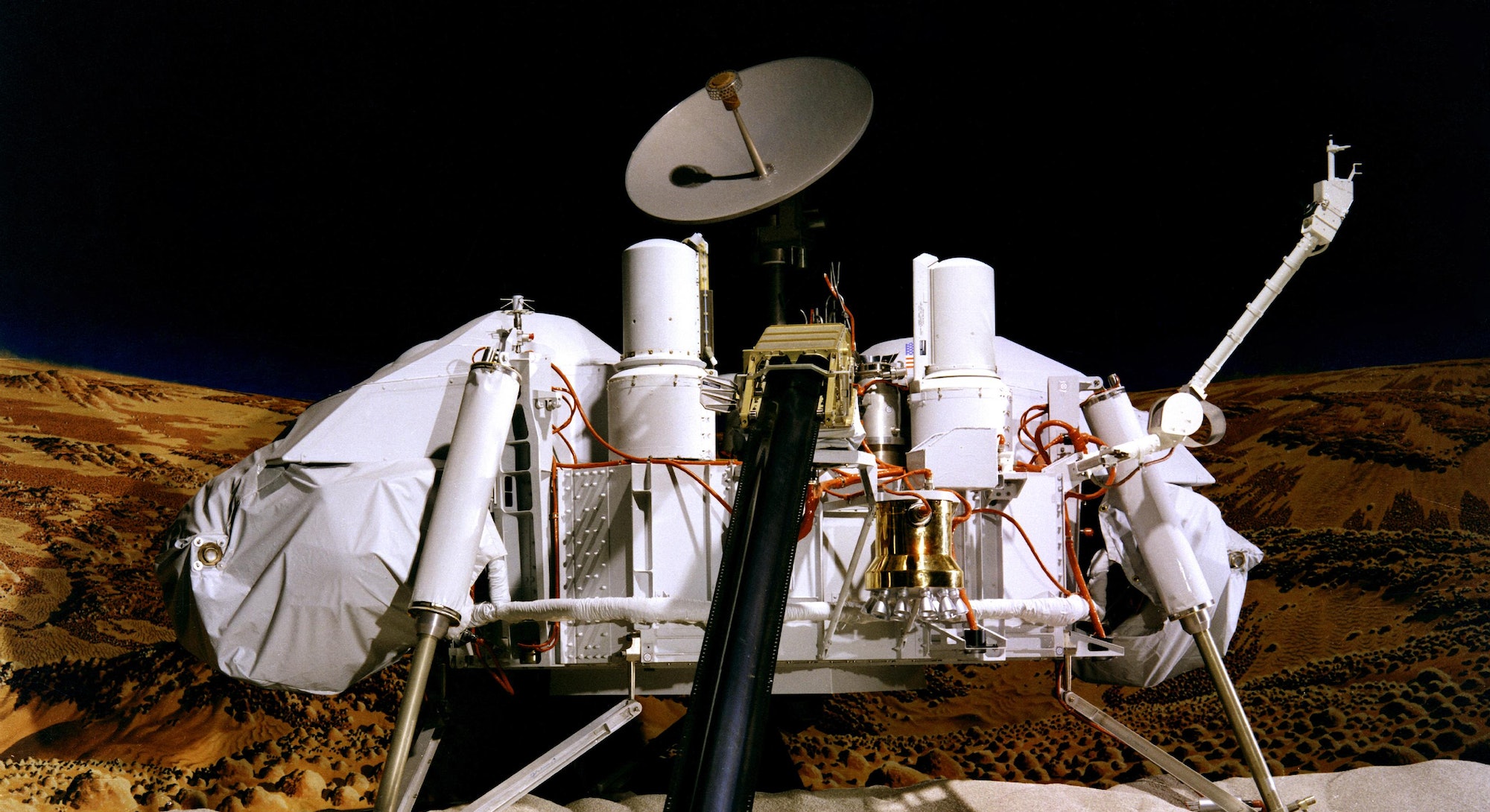 Humans first opened their eyes on the surface of Mars 45 years ago, on July 20, 1976 — or at least, a surrogate pair of eyes anyway.

That’s the date NASA’s Viking 1 lander survived the first soft landing ever to occur on the Red Planet and began taking photos with its two mechanical scanning cameras, their digital outputs trickling bit by bit across the more than 50 million kilometers back down to viewers on Earth.

What we saw changed the course of space exploration forever.

Among the viewers was James Bell, a professor of Earth and Space Exploration at Arizona State University. In 1976, Bell was a self-described “nerd kid,” he tells Inverse, eager to see what Viking 1 would reveal to the world about our planetary neighbor.

“We were watching the NBC evening news with John Chancellor, and I remember the images were coming in live from Mars,” he says. “It was so exciting.”

The first color image of the surface of Mars — an image of the rocky rust-red soil of the Chryse Planitia region beneath a pink Martian sky — is part of what inspired Bell and many of his peers to pursue careers in planetary science in the first place.

Now Bell heads up the color imaging team for NASA’s Perseverance rover, which landed on Mars in January 2021. Perseverance continues to sharpen our gaze on Mars, but the mission could have been very different in truth.

It would be a stretch to call the Viking cameras the most important part of a six-year mission that also conducted pioneering astrobiology and other experiments, Bell says. But the Viking imaging system has left a legacy that influenced every Mars mission since — straight through to Perseverance rover today.

Without Viking 1, there might have been no Perseverance selfies. No images of Ingenuity flying through the Martian skies. No burnt orange panoramas. And perhaps, no enduring cultural obsession with Mars.

The debate over cameras in space

“There was a huge debate about whether to include cameras,” in the early days of the NASA robotic space program, Bell says, “because cameras are big and expensive and delicate.” Basically, NASA didn’t know if cameras in space were worth their time.

“It was a little controversial.”

Part of the reason is that a lot of science can be done with what Bell calls “squiggly line instruments,” like spectrometers and magnetometers.

He says it was an uphill battle to get cameras onto NASA’s early Mariner missions, which explored the inner solar system through the 1960s and the early 1970s.

But qualms were discarded after the Mariner craft began sending back striking images of space back to Earth — including pictures of gigantic Martian canyon systems and towering volcanoes captured by the Mariner 9 orbiter, which launched in 1971.

The images were so striking and so profound that it quickly became unthinkable that scientists could send a lander or a rover to another planet without some form of camera.

These rovers, Bell says, “serve as avatars for us, and we do anthropomorphize them.”

“They absolutely must have eyes,” he adds.

How to put a camera on Mars

By the time Stephen Wall began his first job out of college as an aerospace technologist working on NASA’s Viking 1 imaging team, the grand debate over whether to include cameras was settled — but what kind of camera?

Now retired from NASA, Wall recalls for Inverse that the questions he grappled with then were what kind of camera to include on the mission and how to build it.

“To the average person, it was about as exciting as watching paint drip down the wall.”

“We also wanted some infrared data because that’s the easiest outside of the normal visual spectrum,” he adds.

Wall and his team also knew they wanted a camera that could see a full 360 degrees around the lander, for example, and that it should duplicate the resolution of the human eye, or “about 100th of a degree per pixel,” Wall says.

Eventually, the Viking visual team settled on a mechanical scanning camera, which looks like a cylindrical oil filter with a slit down one side.

It works because a movable mirror focuses light entering the slit onto silicon photodiodes, providing three color and three infrared channels. The cylinder itself could pan 360 degrees.

Bell says it was a design that had more in common with 19th-century panoramic film cameras than the mast-mounted digital cameras of later Mars rover missions. This detail is a little lost on us now all we can see is the final image, but it would have been very obvious to anyone watching the Viking 1 images download, he says.

“To the average person, it was about as exciting as watching paint drip down the wall,” Bell says.

The reason why is that Viking 1’s camera would essentially “build” an image, one thin, vertical strip at a time, before moving slightly sideways to scan up and down for the next strip of the image.

Later Mars missions would use different camera hardware, but the Viking 1 — and later Viking 2 mission, which used the same technology — set important precedents for every Mars imaging team to come.

The cameras on Viking 1 influenced decisions as mundane as ensuring scientists could properly calibrate color photography from Mars and the more difficult decision of choosing the subject of the first photo on Mars.

The first photo on Mars

When Viking 1 landed on Mars 45 years ago, NASA scientists wanted to make sure it took at least one useful photo if the system failed, Wall says.

That attitude may seem pessimistic, but at the time, NASA’s Mars landers were coming in hot on the heels of the Soviet Mars 3 lander failure, which occurred in 1971. There was a good chance this lander would fail, too.

So NASA settled on what today might be called a partial selfie — a black and white image of the lander’s footpad and the surrounding Martian soil. Except back then, selfies were not considered “cute” by an adoring, Mars rover-obsessed public.

“It was a little controversial,” Wall says.

“Nobody wanted a picture of a footpad you built, but on the other hand, when you think about making an extension from something you know about to something you don’t know about, it does make sense,” Wall says. Essentially, NASA wanted to make sure we at least had one image of something made on Earth on another planet’s surface.

After that picture was in the bag, scientists could turn Viking 1’s “eyes” onto more exciting subjects.

The second photo, a full-color image of the ruddy, rocky surface beneath a pink sky, was taken the next day with the idea of appealing to the public, Walls says.

But for him, “the first picture, that was a great joy, and I will always remember that,” he says. It was proof the system worked, “and that’s not only pride but a whole lot of relief.”

From Viking 1 to Perseverance Rover

It also set a precedent: NASA’s landers and rovers have continued taking selfies through the decades for the same reason. For example, if you ask Bell what his dream Mars mission in the spirit of Viking 1 would be, he’ll tell you that he’s working on it right now with the Perseverance rover.

In April, the mission’s helicopter, Ingenuity, made the first controlled, powered flight on Mars — Bell’s team is the one behind the videos of those flights.

Video, Bell says, is the next big imaging technology leap for Mars exploration.

“There’s still really no high-speed internet to Mars, and taking movies costs you a lot of bits,” he says. “That’s a huge challenge.”

It’s also the next baby step on a path that began when Viking 1 opened its eyes on Mars 45 years ago — and a long way from those grainy photographs that got Bell into planetary science in the first place.

“It’s incremental,” he says, “But every mission does a little bit of technological advancement above the last one.”