“What I’m saying is that these are unidentified and we have a right to know, a need to know, and a duty to find out.” 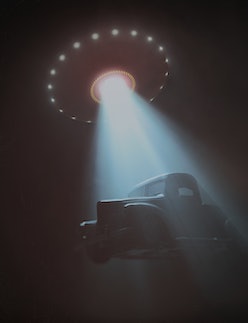 On July 15, 2019, United States Navy personnel filmed something they couldn’t explain — or at least, that is what a new video purports to show.

The video dropped Thursday afternoon on the website of Jeremy Corbell, a filmmaker and UFO enthusiast. In the new footage, we can see what appears to be a radar display with multiple objects moving across the field. At a point in the video, one of the people apparently monitoring the radar exclaims: “holy shit.”

This is just the latest escalation in what is fast becoming an all-consuming obsession on the part of the U.S. public. Sarah Scoles, a journalist and author of the UFO culture book They Are Already Here, has been researching UFO incidents for four years but never imagined that things would get as heated as quickly as they have the last few months.

The video was not independently verified by Inverse. You can watch the new footage here:

This unverified footage purports to show a UFO encounter with U.S. Navy.

The video comes weeks ahead of one of the most-anticipated events of 2021. Inverse, like Scoles, is keeping an eye on the Pentagon UFO report, which is set to be released in June.

“It's definitely not what I expected when I first started looking into UFOs around 2017,” Scoles tells Inverse. “This was not what I thought the end result would be, or even that public interest would sustain itself for this long.”

The government report on unidentified aerial phenomena (UAP) is due to be delivered by June 25. The report has been preceded by a series of surprising statements by the Department of Defense authenticating grainy footage of UAP caught by Navy pilots. This has lead many who have been following the development of this story to wonder: Why are UFOs suddenly the big talk of the government?

Ahead of the release of the UAP report, Inverse breaks down what to expect from it, how much of it will be available to the public, and how it will likely change the narrative around UFOs.

Why is the Pentagon releasing a UFO report?

The catalyst from the reports come from a series of leaked Pentagon videos purporting to show UFOs:

The Act was a part of the mammoth appropriations bill that also included financial aid checks for people living with the economic fallout from Covid-19.

“I was always hopeful that if we beat the drum, marched forward and shook things up and kicked down some doors, that we would see a day like this,” Corbell tells Inverse. “I’m an optimist so I had to believe that we would get more confirmation from what our military knows about the UFO presence on planet Earth.”

Corbell has previously shared footage captured by the U.S. Navy off the coast of San Diego in July 2019. The video, which he shared on Twitter, showed a dark, spherical shape disappearing into the water.

A few days later, the Department of Defense confirmed that the video was recorded by military personnel and that it would be reviewed by the Pentagon’s Unidentified Aerial Phenomena Task Force.

Seth Shostak, a senior astronomer at the SETI Institute, says that the government was forced to confirm the legitimacy of the Navy videos because they leaked to the public — but notably, they didn’t confirm much else.

What is going to be in the UFO report?

As far as what is going to be included in the Pentagon’s report, Corbell is not one step ahead of the government this time.

Former Director of National Intelligence John Ratcliffe said in a high-profile interview with Fox News earlier this year that the report would contain information on “difficult to explain” sightings.

“Now, could they be aliens? Sure, that option is definitely firmly sitting on the table.”

“We are talking about objects that have been seen by Navy or Air Force pilots, or have been picked up by satellite imagery, that frankly engage in actions that are difficult to explain, movements that are hard to replicate, that we don’t have the technology for, or are traveling at speeds that exceed the sound barrier without a sonic boom,” Ratcliffe told Fox News in March.

In addition to the three videos the Pentagon confirmed as real footage in April 2020, the Department of Defense also confirmed the authenticity of several photos and videos of UAPs taken in July 2019.

The footage shows mysterious lights encircling the USS Russell and the USS Omaha at the Naval Base in San Diego — a major point of operations for the U.S. Navy.

A Defense Department spokeswoman confirmed to CNN in April 2021 that the footage of triangle-shaped flying objects was indeed recorded by Navy pilots, but that the Department could not explain what they were.

It’s still not clear whether the report will also include footage that the public has already seen, or if it will release new video footage.

“They’re kind of trying to keep all of this under wraps right now, so I don’t really think we have a sense of what it will contain,” Scoles says. “It would be great if we saw more of their cases because I’ve seen all of the videos and photos that we have about a thousand too many times.”

Meanwhile, Shostak believes that parts of the report will be classified and not available to the public.

“It’s going to be a mix, that’s often the case with these reports,” Shostak says. “Some of it is going to be classified simply because the military doesn’t want to tell you too much about the capabilities of their cameras.”

How will the UFO report affect us?

When the Pentagon released the footage of the UAPs, they admitted they cannot explain the maneuvers pulled by the aircraft seen in the videos. So it’s pretty safe to assume that the report will not confirm whether or not the UAPs are in fact alien spaceships or some form of foreign technology.

“I think in the end, it is above all else an unclassified government report and it will read like that,” Scoles says.

But Scoles believes the report may still serve a purpose as it will lay the groundwork for figuring out what to do with the information that has been released and provide a way to systemize information that may be available in the future.

Will the UFO report confirm aliens?

The short answer is, no. The language adopted by the side of the government has emphasized that they themselves are not sure what these flying objects are.

“You have a transparent, honest response from our military that they don't know what these are,” Corbell says. “So they’re telling the truth.”

Corbell himself remains agnostic as to whether they might be aliens.

“I’m not saying that they’re aliens, I’ve never said that once in my life,” Corbell says. “What I’m saying is that these are unidentified and we have a right to know, a need to know, and a duty to find out from a safety standpoint, from a national security standpoint, as well as for understanding our place in the universe as humanity.”

“Now, could they be aliens?” he adds. “Sure, that option is definitely firmly sitting on the table.”

Although alien enthusiasts have been rejoicing over the government finally confirming the footage of UAPs, it doesn’t necessarily mean that they are admitting these are alien spaceships. Instead, the government’s main concern appears to be whether or not this poses some form of threat.

“It will probably be focused on whether UAP presents a national security threat which is a very terrestrial, very grounded concerning,” Scoles says. “And so that I think will tether a lot of people to Earth.”

But in most cases related to alleged UFO sightings, it only takes an incident of an unidentified aerial phenomenon for people to claim that it is the work of an alien civilization and that will most likely happen with the release of this report.

“UFOs have a very good way of sustaining their own history,” Scoles says.