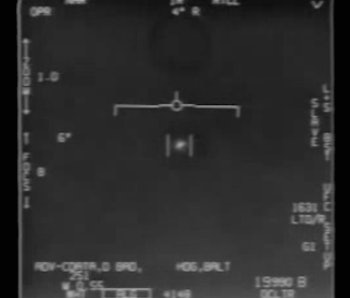 The Pentagon formally released on Monday three videos taken by US Navy pilots that show an "unidentified aerial phenomenon." These videos were leaked back in 2017, and stirred up major UFO rumors.

The footage shows a cluster of odd-looking aircraft flying with unidentified maneuvers, unlike anything the NAVY pilots had seen before as one of them can be heard in the video exclaiming, "What the f--k is that?"

8. What was released -- On April 27, 2020, the Department of Defense authorized the release of three videos, one of which was shot in November 2004, and the other two in January 2015. The videos were leaked in 2017 to the New York Times, and while the Pentagon acknowledged that they were in fact videos captured by the Navy, they noted that they were not authorized for official release.

The Department of Defense decided to release the videos to the public after determining that the footage "does not reveal any sensitive capabilities or systems, and does not impinge on any subsequent investigations of military air space incursions by unidentified aerial phenomena," according to a statement by the Department of Defense.

So while the official release confirms that the footage is real, the Department of Defense still concludes that what was in the footage remains characterized as "unidentified." It's also not clear whether or not the agency will conduct more investigations into the aerial phenomenon.

7. Why the video is making news -- When the videos first leaked, they made the front page of the Times in December 2017, with people claiming that these were in fact alien UFOs.

The DOD making the videos available on their website, and open for download, adds to the legitimacy of this strange phenomenon that even they aren't able to explain. So, it's not that people haven't seen this footage before, but now this footage suddenly gained credibility amongst hundreds of videos that claim to have spotted alien life.

6. Who shot the video -- The videos were shot by fighter pilots, two of whom spoke to the Times shortly after the unofficial leak. A third pilot, Chad Underwood, finally spoke to the media in 2019.

5. What the pilots say about the video -- The pilots can be heard throughout the footage, excitedly wondering what these unidentified objects could be. "What is that, man? Look at it fly." one of them says. "Look at that thing, dude!" another exclaims.

In their interview with the Times, they said that they were called to investigate a series of interactions with unidentified aircraft along the East Coast which they described as an object that "accelerated like nothing I've ever seen."

"The thing that stood out to me the most was how erratic it was behaving. And what I mean by “erratic” is that its changes in altitude, airspeed, and aspect were just unlike things that I’ve ever encountered before flying against other air targets," Underwood told New York magazine in 2019.

4. What skeptics say about the video -- When the footage was first released, no one could deny that something odd was at place here. However, some were arguing that just because something appeared to be strange, does not mean that it is aliens.

Famous astrophysicist Neil deGrasse Tyson told CNN at the time that the objects likely did not come from outer space.

3. What alien believers say about the video -- But for alien enthusiasts, and all-round conspiracy theorists, this was the Holy Grail of footage.

The morning after the videos were officially released by the Pentagon, those who wholeheartedly believe in the existence of extraterrestrial life took to Twitter to rejoice with the hashtags, #AliensExist and #UFO2020.

2. Has Trump said anything about the video -- Prior to the official release of the videos, President Donald Trump told ABC News that he doesn't believe in UFOs, despite an increase in the number of reports of unidentified aircraft by Navy pilots.

"Do I believe it? Not particularly."

"I think it’s probably -- I want them to think whatever they think. They do say, and I've seen, and I’ve read, and I’ve heard. And I did have one very brief meeting on it. But people are saying they’re seeing UFOs. Do I believe it? Not particularly," Trump said.

1. What's next -- That part is a little fuzzy. So, now that the Pentagon has officially released, and acknowledged the footage, they also acknowledged that they don't know what it is. However, they did not specify whether there would be further investigation on the matter, or if they will just let it be known as "unidentified."

The Inverse Analysis -- The Pentagon's decision to officially release the footage is somewhat curious. Although their intention may have been to put the footage to rest, it is likely going to spark more questions and hype around this unidentified cluster of flying objects in the sky three years after the videos were all over the news.

Are they aliens? I mean, maybe.

Even if you are sitting on top of a shrine of skepticism, you have to admit that this whole thing is just a little strange. And now that even the DOD has shrugged its shoulders and admitted, "I dunno," when it comes to these flying objects, they could very well have come from outside of our world.

Maybe it's just a ploy to distract the public from Covid-19. But that's a conspiracy theory for another day.