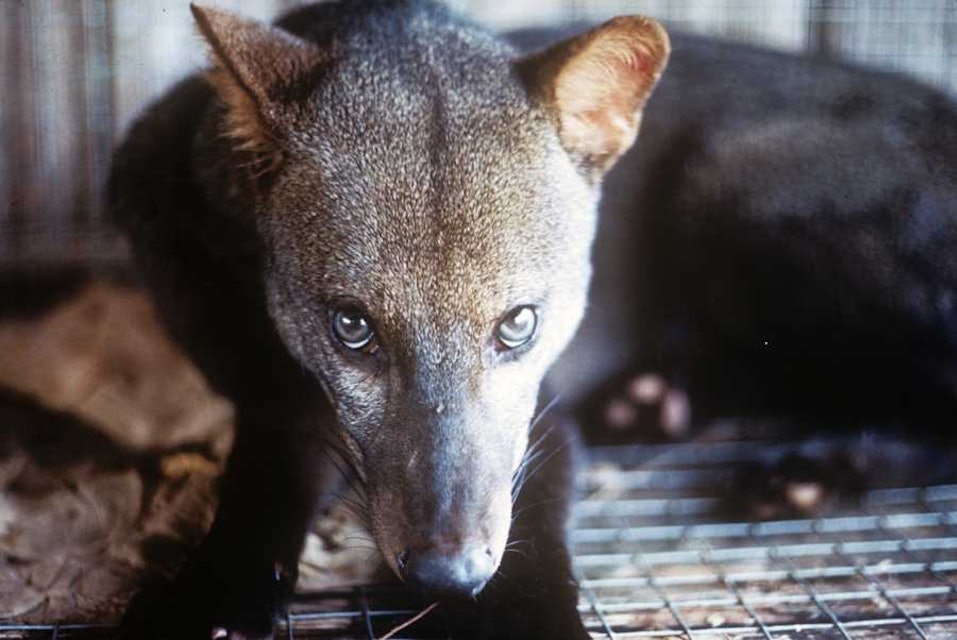 In the Amazon rainforest, a bounty of biodiversity is under threat because of deforestation and climate change. To many, the animals endangered may appear exotic — creatures like jaguars and spider monkeys. However, one precarious population might hit closer to home.

Meet the mysterious short-eared dog, who’s not quite a house pet, but is still, arguably, a very good dog. The species is rare — it only lives in the Amazon — and one of the most understudied wild dogs worldwide.

A new study attempted to remedy this lack of understanding of the short-eared dog, and in turn, came to a startling conclusion: It's time to re-assess the animal's potential for extinction, and shift its status from "near threatened" to "vulnerable."

This study was published Tuesday in the journal Royal Society Open Science.

The short-eared dog is in the canid family of dog-like carnivores, but it’s not in the Canis genus, like dogs and wolves. Instead, the Atelocynus microtis, also called the short-eared zorro, is in a league of its own — the only species in its genus.

Here's an example of a short-eared dog rescued from captivity:

Scientists know the short-eared dog lives in the Amazon, but details of its behavior and evolution are sparse.

This study determined that the short-eared dog lives in a concentrated area in the region south of the Amazon River. They also discovered bad news: These animals are losing their natural habitat, and fast. Thirty percent of their current range could disappear by 2027, because of deforestation.

That's the most encouraging stat: The amount of habitat loss — the range where the short-eared dogs live — could be as high as 40 percent in unprotected areas, and more than 60 percent in areas of the Amazon basin that are segmented by rivers.

Using data to study dogs — To get their results, researchers compiled data on these wild dogs, including which areas of the Amazon are a suitable habitat. That information allowed them to estimate the canid’s current range and to predict how it might change as deforestation continues.

With a network of cameras, the also researchers studied how forest cover and fragmentation affect where the dogs live.

Fragmented forests don’t fill the same environmental roles as lush, untouched forests, research shows. They don’t store carbon as effectively as full forests and draw in 22 percent less carbon. This means that these forests have a smaller effect on curbing global warming, a recent study shows.

Unfortunately for short-eared dogs, forest fragments also aren’t as suitable as a habitat as a fully-fledged forest. Lush forests had a positive effect on the wild dogs’ use of space, while the lower density at the forest’s edge had a negative effect, the new study found.

“Beyond shedding light on the ecology of the short-eared dog and refining its distribution range, our results stress that forest loss poses a serious threat to the conservation of the species in a short time frame,” the team reports.

To help preserve the elusive short-eared dog, the researchers propose increasing its protection status — currently listed as “near threatened” — under the International Union for Conservation of Nature (IUCN). The IUCN is the global authority on the status of the natural world and famously lists how threatened species are.

Researchers suggest that increasing the status, and taking more steps to protect these wild dogs, might give the struggling population a fighting chance.

Abstract: Amazon-endemic canid and one of the most understudied wild dogs worldwide. We investigated short-eared dog habitat associations on two spatial scales. First, we used the largest record database ever compiled for short-eared dogs in combination with species distribution models to map species habitat suitability, estimate its distribution range and predict shifts in species distribution in response to predicted deforestation across the entire Amazon (regional scale). Second, we used systematic camera trap surveys and occupancy models to investigate how forest cover and forest fragmentation affect the space use of this species in the Southern Brazilian Amazon (local scale). Species distribution models suggested that the short-eared dog potentially occurs over an extensive and continuous area, through most of the Amazon region south of the Amazon River. However, approximately 30% of the short-eared dog’s current distribution is expected to be lost or suffer sharp declines in habitat suitability by 2027 (within three generations) due to forest loss. This proportion might reach 40% of the species distribution in unprotected areas and exceed 60% in some interfluves (i.e. portions of land separated by large rivers) of the Amazon basin. Our local-scale analysis indicated that the presence of forest positively affected short-eared dog space use, while the density of forest edges had a negative effect. Beyond shedding light on the ecology of the short-eared dog and refining its distribution range, our results stress that forest loss poses a serious threat to the conservation of the species in a short time frame. Hence, we propose a re-assessment of the short-eared dog’s current IUCN Red List status (Near Threatened) based on findings presented here. Our study exemplifies how data can be integrated across sources and modelling procedures to improve our knowledge of relatively understudied species.