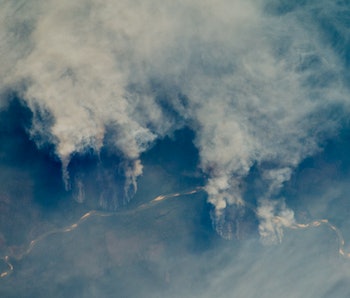 On Tuesday, thousands of people took to Twitter to share the hashtag #PrayforAmazonia. The viral movement came as the skies above Sao Paulo blackened with the smoke from forest fires burning in the Brazilian states of Amazonas and Rondonia, over 1,000 miles away from the city of Sao Paulo.

Many of the tweets express shock that parts of the Amazon rainforest, the largest rainforest in the world, have been aflame for the past two weeks. Social media analytics site Hashtracking estimates that over 700,000 tweets with the hashtag #PrayforAmazonia have been sent in the past 30 days, amid a record number of forest fires in the Amazon this year.

These fires are part of an ongoing trend under the administration of President Jair Bolsonaro. Areas of the Amazon the size of football pitches are now routinely cleared through slash-and-burn techniques, and critics argue that Bolsonaro’s government is encouraging this deforestation.

Why the Amazon Is Burning

According to preliminary data collected by Brazil’s National Institute for Space Research (INPE), approximately 870 square miles of Amazonian forest was destroyed by human-made fires in July. This represents a 278-percent increase in the amount of forest destroyed during in the same period in 2018.

After that data was made public, Bolsonaro dismissed it as “lies” and fired the INPE’s director Ricardo Galvão. Historically, the data collected by the INPE has been valued as essential documentation of the Amazon’s health, and it fueled a movement that resulted in decreased deforestation from 2004 to 2012. Now, Bolsonaro says the INPE is working “at the service of some NGO.”

Bolsonaro was elected in 2018 and endorsed by Brazil’s farming lobby. For decades, Brazil’s farmers have argued that the laws prohibiting land development in the Amazon, including lands that are reserved for indigenous people, are too restrictive. Accordingly, deforestation is increasing in part because farmers believe they can slash and burn without government-sanctioned punishment.

“The explosion of deforestation can be attributed both to changes in government actions, such as essentially ending inspections for illegal deforestation and firing those who are caught, and from the rhetoric from President Bolsonaro and his ministers, especially the minister of environment,” Philip Fearnside, Ph.D., a professor at Brazil’s Institute of Amazonian Research told Newsweek on Tuesday.

“This has created a climate of impunity under the assumption that there will be no consequences for ignoring environmental regulations.”

The Consequences of Burning the Amazon

According to the National Oceanic and Atmospheric Administration, the Amazon was mostly fire-resistant for most of its history. Now, fires are caused by human activity and exacerbated by anthropogenic climate change-driven droughts.

When individuals slash and burn trees to make way for farmland and cattle pasture, as well as when they selectively log for cash-crop trees, the altered nature of the rainforest contributes to ongoing fires. Removing trees allows the sun to reach and heat the forest floor, drying out plant life. Meanwhile, smoke suppresses rainfall and cloud formation, all while heating the atmosphere.

This smoke changes local weather, compromises the health of humans, and puts animals and plants at a massive risk. Subsequently, the damage done to biodiversity and soil makes it difficult for rainforests to regenerate after such fires.

Furthermore, the loss of the Amazon via deforestation means carbon emissions are released while a once-massive carbon sink is destroyed. Forests play a role in mitigating climate change because they can soak up carbon dioxide from the atmosphere. However, a 2014 study showed that selective logging and surface wildfires in the Amazon can result in an annual release of 54 billion tons of carbon. On Tuesday, scientists announced in Nature Geoscience that the Amazon Basin is increasingly becoming less effective at taking up carbon, concluding that “the resilience of the region to climate change may be much less than previously assumed.”

Scientists argue that by reducing logging, forest disturbance, and degradation, some of the Amazon’s carbon-absorbing capabilities can be restored. But Bolsonaro seems undeterred by Europe’s criticism of his stewardship, so it remains to be seen what will catalyze that change. Public movements are likely necessary, but for now, they live on Twitter.

More like this
Science
5.19.2022 9:00 PM
The world's most vital forests are dying at twice the rate they did 35 years ago — study
By Elana Spivack
Science
5.18.2022 8:00 PM
Pollution is responsible for one in six deaths each year — and it’s getting worse
By Tara Yarlagadda
Science
5.13.2022 3:01 PM
Can restaurant menus help diners choose climate-friendly meals?
By Tara Yarlagadda
Related Tags
Share: