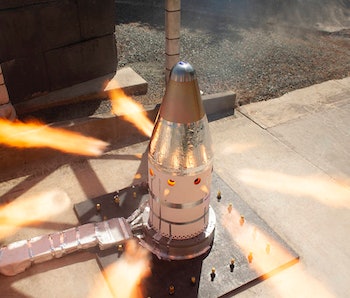 NASA is preparing The Orion spacecraft for a historic launch to the Moon, where it will lay the groundwork for humans to return to the lunar surface for the first time since the Apollo missions.

But before it launches into space next year as part of the Artemis Moon mission, Orion is undergoing some last-minute touches at the Kennedy Space Center in Florida.

NASA announced the craft arrived there this week — its final stop on the way to the Moon.

NASA is currently prepping Orion for the first, critical phase of the Artemis mission. Scheduled to take off in April, 2021, Artemis I will kick off the first manned lunar mission in more than 50 years.

But rather than landing on the Moon, Orion will overshoot it by thousands of miles. The maiden voyage will consist of an un-crewed test flight of the spacecraft.

After making its way around the Moon, Orion will turn back, and return to Earth.

During its trip, it will travel approximately 280,000 miles from Earth. It will spend more time in space without docking at a space station than any other spacecraft of its kind has ever done before — a total of three weeks or so.

The move to the Kennedy Space Center is just the latest leg of an already long journey to fruition for Orion.

First, the spacecraft was exposed to temperatures ranging from -250 to around 200 degrees Fahrenheit to simulate the range of extreme temperatures that Orion will undergo as it passes through sunshine and shadow during its spaceflight.

Next, the Ohio team tested whether the spacecraft’s electronics functioned properly in the harsh electromagnetic environment of outer space by running an electromagnetic interference and compatibility test.

Thankfully, Orion passed the tests with flying colors, enabling it to be transferred to Florida for a final round of tests.

At the Kennedy Space Center, the Orion spacecraft will also undergo some last fixes so it can be integrated with NASA's Space Launch System (SLS) rocket.

These tests will include performance verification of the vehicle’s subsystems, checking for leaks in the spacecraft’s propulsion systems, installing its solar array wings, performing spacecraft closeouts, and pressurizing a subset of its tanks in preparation for flight, according to NASA.

Once the spacecraft is given the green light, it will be attached to the SLS. Once in situ, it will go under another barrage of tests to make sure that the spacecraft and the rocket are working well together.

“The Artemis Program is the future of human space exploration, and to be a part of the design, assembly and testing of NASA’s newest spacecraft is an incredible, once-in-a-career opportunity,” Amy Marasia, spacecraft assembly operations lead in Orion production operations at Kennedy, said in a statement.

“Witnessing the daily transformation of numerous individual flight hardware components and parts into a fully equipped and operational spacecraft is one of my favorite parts of this job.”

Following the launch of the Artemis I mission, NASA will once again prep the Orion spacecraft for Artemis II. This next phase will carry humans onboard the journey to the Moon, but they will not land on the lunar surface just yet. Artemis II is scheduled for the year 2023.

In that second mission, the spacecraft will circle the Earth twice and periodically fire its engine in order to build up enough speed to propel it towards the Moon.

After it orbits the Moon, the spacecraft will use the Moon’s gravitational pull to slingshot itself back to Earth.

If Artemis I and II go according to plan, NASA will be ready for the main event.

The space agency hopes that, by the year 2024, Artemis III will carry humans to the Moon onboard the Orion spacecraft, where they will finally touch down on the Moon's South Pole.

The Artemis mission is designed to return humans to the Moon periodically, essentially setting up camp on the lunar surface that may one day help space agencies in landing the first human on Mars within the next decade.