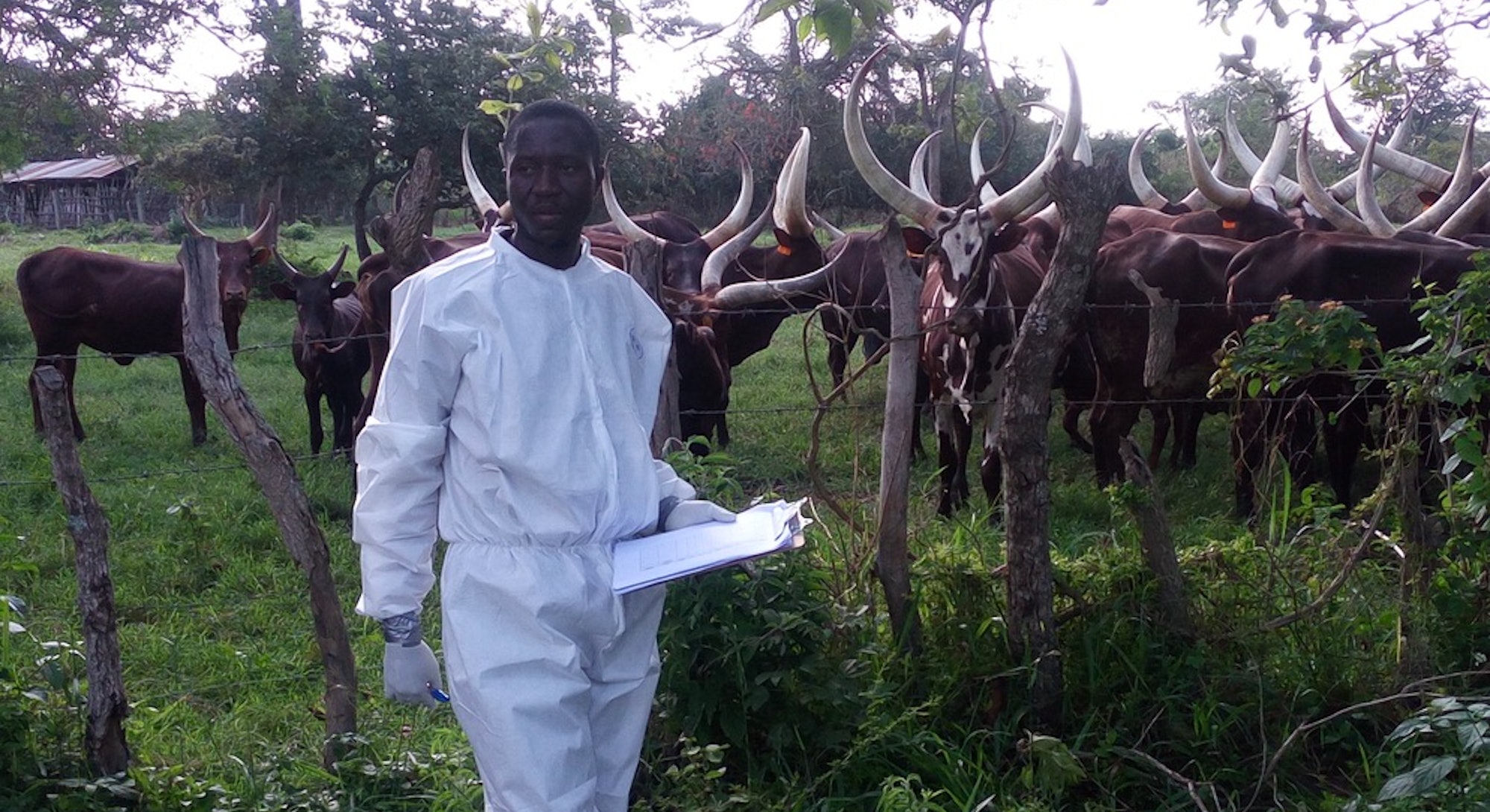 In Liberia, on the West African coast, when someone is bitten by a wild dog or a sickness moves through a farmer’s cattle herd, Solomon George investigates.

A Veterinary Surveillance Officer at the Ministry of Agriculture in Liberia, George tracks and tries to contain diseases classified as “zoonotic" — diseases that spread between animals and humans. Along with hundreds of other animal disease detectives across the globe, George is hunting the next Covid-19, the coronavirus thought to have originated in bats.

George works within a network of scientists and health workers who predict, prevent, and contain the world’s staggering number of zoonotic diseases. Six out of 10 infectious diseases in people are zoonotic, and an estimated 600,000 viruses have the ability to transmit from animals to humans.

Stretched thin and operating with limited funding, this intrepid group roams animal habitats, markets, forests, and farms, monitoring wild or domesticated animals’ sickness or death. They identify "spillover hotspots," and priority diseases that are likely to make the jump to humans. To prevent spillover, they advise on how land can be used safely, how people should interact with animals, and how outbreaks can be managed.

“The best way to control any disease is to deal with it from the source,” George tells Inverse. But this preventative approach rarely occurs. Instead, outbreaks occur and health authorities take a “fire brigade” type of approach, he says. This is the biggest problem when it comes to preventing the next Covid-19.

“The house is already on fire before we come and begin to put out the flame.”

Nowhere is the "fire brigade" more apparent than with the previously unknown Covid-19 coronavirus, which has brought the global economy and public life to a screeching halt and sickened over six million people. While vet detectives like George have been shocked by the scale and scope of the virus’ spread, few are surprised that such a pathogen arose.

“We have viruses and pathogens that know absolutely no borders, and our systems are not structured to accommodate that reality,” David Castellan, a veterinarian at the Institute for Infectious Animal Diseases, tells Inverse.

“If we're going to wait until something gets to the human population, it's already too late."

Each year, zoonotic diseases like anthrax and rabies cause 1 billion cases of illness and millions of deaths. As humans crowd —and in many cases destroy — animal habitats, the spillover of zoonotic diseases into people grows.

People can catch zoonotic diseases by eating or drinking contaminated food, touching or petting infected animals and their fluids, touching germ-filled areas where animals live like a chicken coop or aquarium, or being bitten by an animal or a disease vector, like a tick or a mosquito.

In the past 50 years, global changes in land use, agriculture, trade, and travel have led to a “striking” number of newly described zoonotic diseases, reports a 2012 study published in The Lancet. To date, three-quarters of the land-based environment and about 66 percent of the marine environment have been significantly altered by human actions.

Humans have wiped out 60 percent of the world’s wildlife in the past four decades, according to the World Wildlife Fund’s 2018 Living Planet report. In turn, wild animals are being pushed into areas dense with humans.

“Every time we take away habitat, we have to ask ourselves: ‘Where are those wild animals going that are potential carriers of these organisms?’” Castellan asks.

"You cannot divorce the relationship between humans and animals," George explains. What you can do is collect data, build preparedness, and strengthen prevention efforts to identify and contain disease outbreaks.

A day in the life of a vet detective

Melinda Rostal is a principal scientist in vector-borne diseases at EcoHealth Alliance, a global environmental health nonprofit dedicated to protecting wildlife and public health from the emergence of disease. EcoHealth Alliance works in the United States and over 30 countries worldwide.

“Human health, animal health, and environmental health are all interrelated,” Rostal tells Inverse. “We cannot have one without the other two also being in balance.”

For animal disease detectives like Rostal, no two days are the same. Days are spent surveying animals, taking biological samples, or sequencing viruses in the lab. She admits venturing into areas of potential outbreaks “gets your heart pumping.”

“The first time you're wearing all the protective equipment, you are nervous and so you're very, very cautious — which is a good thing,” Rostal says. “These aren't pathogens that you ever take lightly.”

On top of the communication challenges, the work takes an emotional toll, because sick or dying animals often mean people’s loss of livelihood.

George recalls a particularly disastrous outbreak: Near one of Liberia's borders, disease ripped through thousands of cattle. Because of limited feet on the ground and inefficient reporting systems, George and his team weren't notified until over a month after the outbreak began.

By that point, over 3,000 cattle had been killed. And although the disease didn't transmit to people, it waged a serious human cost. Locals relied on these ruminants for sustenance and to survive financially, pay medical bills, and send their children to school. Scientists estimate each family lost an estimated $500 U.S. dollars.

"When we got there, the farmers were really, really, really downhearted and very frustrated, that we had come at the time when they lost almost everything they had," George says. "We try as much as possible to make sure that a similar situation will never be repeated."

Vet detectives around the globe are mapping zoonotic viral threats, researching behaviors and practices that spur disease spillover, and building a global surveillance network. But the resources just “aren’t forthcoming” enough to support the integrated, multi-level approach that is needed, George says.

“There aren't so many veterinarians around the world,” Castellan adds. “Our budgets and manpower resources are very small compared to public health. As a result, we have to work much harder and smarter by being very risk-based in our approach.”

Angela Hilmers is an epidemiologist at TEPHINET, a global network of field epidemiology training programs. This type of work, she explains, “requires a lot of collaboration.”

“Only developing curriculum is not going to be enough,” Hilmers tells Inverse. “You have to build capacity in-country and sustain programs.”

“People understand their countries and their farmers and their systems much better than we do,” Castellan adds. “It's a matter of tapping into their knowledge base and working together collaboratively to find solutions that will work for them, not just something out of a textbook, but something that will work in the real world.”

To build support, animal disease detectives have to try to capitalize on the “momentum of the Covid-19,” Hilmers says.

The Global Virome Project, a 10-year collaborative scientific initiative, estimates discovering and tracking 71 percent of the world’s zoonotic diseases would cost relatively little, when seen through the lens of what pandemics costs: 1.2 billion U.S. dollars. The global response to Covid-19 has already surpassed two trillion dollars.

“Wildlife has not been well studied as far as what pathogens they have,” Rostal says. “If we could go and do intensive study in bats, rodents and primates — groups of animals that seem to have more viruses that can spread to people — then we can know at least what's out there and we can respond more quickly if something does spillover.”

Currently, funding for this kind of work is dwarfed by public health projects. Peter Daszak, a disease ecologist and president of EcoHealth Alliance, traces the lack of funding to societies’ forgetfulness between disease outbreaks, and the lack of financial incentive to produce vaccines or drugs for sporadic outbreaks.

George reasons it comes down to how people weigh the value of animal life.

“People do not really try to really see it as urgent when you say animals are dying,” George says. “But when you talk about a loss of a human life, you claim attention. Before a single human life is lost, we could have avoided that situation if we address it from the animal.”

Hannington Katumba, a field veterinarian working in and around Kampala, Uganda, describes the vet as one of the most “ill-equipped but critical frontline soldiers.” Vet detectives effectively run interference when a zoonotic viral threat is pinpointed, he explains. They can shape public health communications to keep people away from infected animals or treat animals and curb transmission into humans.

“Many diseases don’t even ever show up because we are there," Katumba tells Inverse. “It should be fair to demand that vets are honored at least with an optimum enabling working environment to do what they do best — be on the frontline saving lives, yet in the background."

The threat of future pandemics, Rostal stress, is real. She theorizes that another will hit within the next decade, especially considering the amount of contact people have with bats. The ability of a vet detective to efficiently do their job, she says, could mean the difference between "living in fear" or being ready to manage inevitable outbreaks.

“When you don't see something except every hundred years, it can be hard to remember that it is an imminent threat," Rostal says. "We need to be aware that this obviously has happened now and that it could happen again.”

In the meantime, George and his team are making do with what resources they have.

"We will continue to do our best," George says. "But sometimes you return at the end of the day and notice that, yes you have done your best, but you could have done more if you had more support."