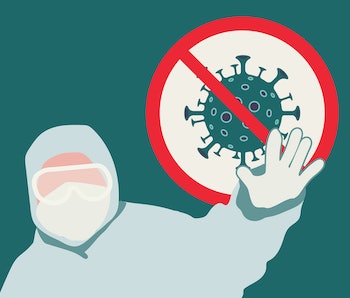 A deadly new coronavirus — 2019-CoV — is spreading like wildfire across the globe. The decade's first large public health crisis appears to have caught us by surprise. It shouldn't have.

As of January 31, the Chinese port city of Wuhan and 16 other cities in the country are under the biggest quarantine in human history. But the virus has spread far beyond China's borders. Overall, there 9,950 confirmed cases of 2019-nCoV and 213 people have died worldwide. On Thursday, the World Health Organization declared the virus a public health emergency of international concern, and health departments around the world are scrambling to control the virus.

But here's the thing: We should have seen coronavirus coming.

Months ago, scientists working in Wuhan warned that the rise of a coronavirus like 2019-nCoV was "highly likely." As one of the researchers who sounded the alarm bells tells Inverse, the emergence of such a virus was only a matter of when, not if.

When 2019-nCoV first emerged, it wasn't completely clear where the virus had come form, but research published Thursday in The Lancet confirmed that the virus is similar, but not identical, to the same virus that caused the SARS epidemic in 2003. The results suggest that, like SARS, 2019-nCoV first emerged in bats, but made the jump to humans through an intermediary host (as Inverse reported, snakes are the likely culprit).

For decades, bat scientists have been acutely aware that coronaviruses such as SARS and now 2019-nCoV pose huge threats to humans. And in March 2019, the scientists at the Wuhan Institute of Virology issued a stark warning. In a paper published at the time, they said that it was "highly likely" that a future SARS- or MERS-like coronavirus outbreak would soon emerge from bats living in the region.

The warning signs for this pandemic have been hiding in plain sight all along, Peter Daszak, the president of the EcoHealth Alliance and emerging disease expert, tells Inverse.

"If we think about the high risk for the next pandemic, we know where they’re going to come from. We know that bats carry the highest proportion of viruses that can infect people on the planet of any mammal species.

"These viruses are constantly spilling over into human populations in China, in Southeast Asia, from bats. We’ve been raising the flag on them for 15 years."

"We tend to get short-sighted"

Predicting exactly which new coronaviruses will affect people and how they will spread is tricky, but scientists had been hard at work tackling that question, says Daszak. One of the major programs that was supposed to look into that was USAID's PREDICT program — an initiative that began after the 2005 bird flu scare. The program's mission was to detect of animal-borne viruses that could one day infect humans.

The program, which cost over $200 million, identified 931 new viruses –including SARS- and MERS-like coronaviruses across the globe.

But funding for PREDICT has fizzled. In October 2019, the program's director Dennis Carrol told The New York Times that the program had "essentially collapsed into hibernation."

"I guarantee four months from now, when this outbreak is over, the programs that were set up will gradually start to wind down."

Daszak was the leader of the PREDICT program in China. He says they identified 50 SARS-like coronaviruses before the program collapsed.

There are other projects out there designed to identify emerging diseases like 2019-nCoV. But he says the fate of PREDICT is illustrative of a larger trend when it comes to zoonotic diseases. These diseases are "truly an existential threat to our livelihood on this planet," but we also tend to forget about them once outbreaks dissipate, he says.

Continuously searching for diseases in animals could help prevent outbreaks among humans and reduce costs in the long run, experts say. In a report released by the National Academies of Sciences, Engineering, and Medicine, researchers note that "it is penny-wise and pound-foolish to continually invest in large emergency responses without investing in effective disease surveillance systems."

Yet, after the crisis is over, the inspiration to pursue the search for these emerging diseases often wanes, Daszak says .

"We tend to get short-sighted between outbreaks. I guarantee four months from now, when this outbreak is over, the programs that were set up will gradually start to wind down, the funding will dry up," he says.

Can we stop the next coronavirus?

Coronaviruses have some of the largest genomes amongst all RNA viruses, which means there are seemingly endless combinations for recombination or mutations. That is an ever-simmering genetic pot of viral soup that can, seemingly at any moment, come up with from fresh diseases that may go on to infect humans.

The more you know about the what ingredients are in that pot, the better you can figure out what may emerge next. That means digging deep into the genetics of coronaviruses.

The identification of bat coronaviruses, the authors of the March 2019 paper warn is "an urgent issue for the detection of early warning signs." The interest has been rekindled by the recent outbreak, but how long will it last?

"We spend money on that so we can find out what's out there."

In a paper released this week, a team of scientists in Singapore suggested a way to use next-generation genetic sequencing (the same technology that allows entire genomes to be sequenced in days or hours, rather than months) may help is identity new coronaviruses more quickly. In their trial, this team developed a series of "probes" that could bind to viruses, and help scientists identify them.

They were able to use that technology to identify nine coronaviruses. The approach shows that "cost-effective, large-scale" analysis of bat coronaviruses is "extremely feasible," the researchers say.

But you can't track a virus with a probe if you don't know what exactly what that virus might look like to begin with. Lin-Fa Wang, the study's lead author suggested that they need to continuously update that information in a "living library" that contains everything we know about the viruses that are already out there.

A version of it already exists. The Global Virome Project, which launched in 2018, (also headed by Daszak) is an attempt to identify as many zoonotic viruses as possible and create an atlas of all potential threats.

The Global Virome Project was "heavily criticized" in the beginning, Daszak says. Most of the griping was over the cost, which nears $1.2 billion.

"We spend money on that so we can find out what's out there," he says. "So when you go to develop a vaccine that's for not just one coronavirus, you've at least got those coronaviruses in the lab and you know what they are."

But if scientists identify the next virus, is there a way to actually do anything about it in time to help protect people?

Ideally, identifying all emerging coronaviruses could help develop a universal vaccine — something scientists have been working on hopes of controlling the 2019-nCoV outbreak. But that could still be decades away, Daszak says.

Instead, the answer to preventing another coronavirus outbreak does not have to be overly technical, he says. It may come in simple, proactive intervention: Programs that promote safer handling of wildlife, education and allocation of resources to places that may be particularly at risk for an outbreak could be enough to help contain it.

Right now, early warning signs may be the best we can hope for. So long as we actually listen to them, that is.

More like this
Science
Jan. 22, 2023
Infection expert answers 7 top questions about Covid-19’s “Kraken” subvariant
By The Conversation and Sameer Elsayed
Science
Feb. 4, 2023
How Scientists Decide Whether Everyday Products Could Cause Cancer
By The Conversation and Brad Reisfeld
Science
18 hours ago
The Plague Is Still Here — And It Could Infect Your Cat
By Tara Yarlagadda
LEARN SOMETHING NEW EVERY DAY.
Related Tags
Share: