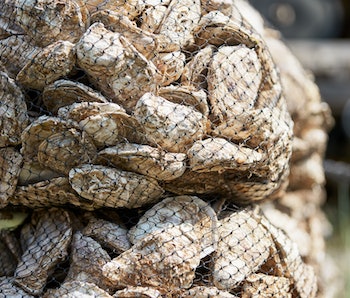 On the Crystal River in western Florida, the shells of 20 to 30 million oysters once sat in an enormous mound. Today, a large portion of the mound is still intact, and it represents just one piece of a historical settlement built by Native Americans centuries before the arrival of Europeans.

While the massive stockpile of oyster shells might seem unique, shell sites and mounds are common fixtures in many historical Indigenous settlements on coastlines around the world. Some marked ritual or burial grounds, while others were symbols of political or social life. They provide a window into how Indigenous peoples interacted with the world around them — a relationship that might hold the key to restoring ecosystems today.

Writing this week in the journal Nature Communications, an interdisciplinary group of researchers analyzed data and records from shell sites in North America and Australia to understand historical harvesting practices that various Indigenous groups used to collect oysters. They found that these ancient methods were much more sustainable and kinder to the ecosystem than oyster fisheries managed by European colonists starting roughly 400 years ago.

Here’s the background — Oysters are no small part of an ecosystem. Despite their size, they’re known as a keystone species, meaning they play a vital role in keeping the entire environment afloat.

“Through their process of living, they make the ecosystem better for other organisms,” Leslie Reeder-Myers, an assistant professor of anthropology at Temple University in Philadelphia and co-author on the study, tells Inverse.

Oysters live in large groups and are known for their exceptional ability to filter impurities from water. By improving water quality, oysters keep things clean and healthy for all the animals and plants that live around them.

But in many areas, such as the Chesapeake Bay and Gulf of Mexico, oyster populations are at historic lows. That was no accident — centuries of overfishing and pollution in coastal ecosystems caused the damage we see today.

A 2004 report in the journal Proceedings of National Academy of Sciences tracked the decline of 28 oyster fisheries managed by European settlers dating back to the 1650s. In North America and Australia, they all had the same pattern of growth and collapse — harvesters overfished and exploited oyster populations until there was nothing left to gather.

But the history of oyster collecting doesn’t start or end with colonialism. Reeder-Myers says that the new work seeks to dig deeper into the past to see what oyster harvesting was like before the modern boom-and-bust fisheries took their toll on ecosystems worldwide.

“Our data basically boiled down to, ‘holy crap, that’s a lot of oysters.’”

Tracing the past — When Europeans arrived on North American and Australian shores, they described the ecosystems as “wild” and pristine. But the opposite was true, since Indigenous peoples had been fishing there long before they arrived.

“My work in Chesapeake Bay has always kind of focused on the idea that actually, these fisheries have been important for a really long time,” Reeder-Myers, who has been studying fisheries in the region for over a decade, says.

To build off the 2004 PNAS report, Reeder-Myers and colleagues analyzed data from previous reports and records on Indigenous shell sites in three regions: eastern Australia, the Pacific coast, and the Atlantic coast of North America. The remains of those oysters can help archaeologists understand past climates, sea levels, nutrient content, salinity, and see how much people were fishing.

Historical records and Indigenous oral traditions also helped the researchers piece how important oysters were for Indigenous peoples. Accounts from the 1600s reveal that members of the Kecoughtan tribe offered oysters to English colonist John Smith in exchange for copper and hatchets. And traditions passed on for generations by the Quandamooka Aboriginal people reveal a time-tested method for farming oysters along the Moreton Bay in Australia today.

Despite the misconception that the regions were only lightly fished before the arrival of Europeans, records show that Indigenous peoples were using oysters for a major source of sustenance. They amassed millions to billions of shells in some of the larger historical mounds, namely in modern-day California, Florida, Georgia, and South Carolina.

“Our data basically boiled down to, ‘holy crap, that's a lot of oysters,’” Reeder-Myers says. And yet the destructive effects of oyster fishing — and the collapse of many fisheries — didn’t really appear until the 18th century.

What went wrong? — There were a few major differences between Indigenous oyster fisheries and colonial ones, starting with their scale. Instead of trying to harvest as many oysters as possible in order to sell to more buyers around a steadily expanding United States, indigenous fisheries were more contained.

They also used different fishing techniques, and did not have the same kind of equipment to dredge estuaries and deplete oyster populations through overfishing.

“We see that people are impacting oyster populations in some cases, but they're not causing that widespread collapse that we see during the 19th and 20th century,” Reeder-Myers says.

But the sustainability of Indigenous fisheries goes beyond just techniques and equipment, Reeder-Myers explains. The mindset that Indigenous peoples had about the land they were living on was completely different than those who established colonial, capitalist fisheries.

“We tend to sort of divide our landscape up into pieces, right? We have the cities, and we have the industry, and we have agriculture … all of these different individual industries that are completely separate,” she explains. But that division wasn’t the same for many Indigenous groups that previously managed fisheries.

Instead, Reeder-Myers says, “I think that many of these Indigenous groups saw the landscape as a whole … and were very aware and very concerned about the impacts that one activity would have on another resource.”

More than strategies — Improving oyster populations and sustainability of fisheries today isn’t a simple act of learning lessons from the past. Rather, the authors emphasize that displacement of Indigenous peoples from their coastal homelands wreaked havoc on ecosystems and caused many missed opportunities for sustainable coastal management.

“It's more that this is a social justice issue or an environmental justice issue, and that we need to sort of reconnect and put these people back into their ancestral ecosystems,” Reeder-Myers says.

What that looks like will depend on how Indigenous people today — the descendants of those who managed the ancient fisheries — want to participate.

“Step one is to ask, to find out what people want, and how people want to be involved,” Reeder-Myers says. “That’s kind of what we're hoping to instigate with this paper — just to start that conversation.”

More like this
Science
Jan. 22, 2023
Humans didn’t evolve to live in cold — our survival is a lesson in ingenuity
By The Conversation, Kyoko Yamaguchi and Laura Buck
Science
Jan. 29, 2023
Studying ancient human DNA has unlocked our origins — but the ethics are hazy
By Emiliano Rodríguez Mega and Knowable Magazine
Science
Jan. 24, 2023
Look: With a mouth full of teeth, this Pterosaur ate like a whale
By Jennifer Walter
LEARN SOMETHING NEW EVERY DAY.
Related Tags
Share: