"Almost no meat-eater will turn down a free meal if one presents itself." 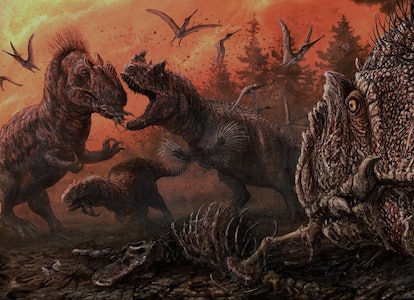 Scientists collected more than 2,300 dinosaur bones from Colorado's Mygatt-Moore Quarry and discovered that nearly 30 percent of them had bite marks from theropod dinosaurs.

Most of the bite marks likely came from Allosaurus, a major predator whose teeth left telltale marks in the bones. Allosaurus bones were also the most common theropod fossils found in the quarry.

The bite marks were predominantly found on the bones of herbivores — typical prey for meat-eaters like the Allosaurus. With large claws and dagger-like teeth that curved backward to prevent prey from escaping, the Allosaurus was a master hunter who ate like a modern-day bird of prey.

Marks on the less nutritious parts of the prey suggest that the theropods were scavenging for prey after others had gotten there first. But the team also discovered that 17 percent of the bite marks were on the bones of carnivores — theropods that very likely included the Allosaurus themselves.

This indirect evidence suggests, for the first time, that the Allosaurus was forced to practice cannibalism. This finding was published Wednesday in the journal PLOS ONE.

The research team was surprised to uncover so many fossils with grooves, or furrows, in the Colorado quarry — normally, bite-marked dinosaur fossils are difficult to come by.

Due to previous studies, the team expected to see preserved bite marks on fewer than 5 percent of the bones. The fact that there were marks on almost 30 percent of these bones was illuminating, lead study author Stephanie Drumheller-Horton tells Inverse.

"That tells us that dinosaurs were less reticent about biting into bones than we previously thought," says Drumheller-Horton, a paleontologist at The University of Tennessee, Knoxville.

While today some mammals and crocodylians actively eat bones, researchers haven't historically thought dinosaurs did the same. Since finding dinosaur bite marks on bones is rare, it was theorized that dinosaur predators probably targeted soft tissue and then cast aside the bones. That way of eating is similar to modern Komodo dragons, Drumheller-Horton explains.

This new study upends that idea.

"What we’re finding in the Mygatt-Moore quarry doesn’t hang with that interpretation," Drumheller-Horton says.

That raises questions about why this new discovery included so many fossilized bite marks. The unexpected batch of bitten bones could be explained by two different scenarios, Drumheller-Horton explains.

"Either something odd was going on in the Mygatt-Moore ecosystem, or the way we collect fossils has skewed our previous results," she says.

In the Jurassic period, about 150 million years ago, the Mygatt-Moore ecosystem underwent wet and dry seasons, as well as major droughts and fires. These conditions make it hard to find food.

So theropods like Allosaurus may have been "eating every available resource during a rough patch," Drumheller-Horton says.

But the way Drumheller-Horton and her team selected samples from the quarry was unusual, too. Rather than judging which bones to bring back to analyze in the lab, the team collected "absolutely everything." That's atypical, given the space and resources it takes to display bones in museums.

What that means is that "when we compare our results to other dinosaur assemblages, we might not be making apples to apple comparisons," Drumheller-Horton says.

"If our collection includes everything, no matter how battered or fragmentary, but others only include the most complete, attractive samples, we might expect to find fewer bite marks among the more pristine bones."

Cannibal dinosaurs — Severe drought and other tough conditions may have driven Allosaurus to eat its own kind, as the research team predicts. While the fossilized bite marks can't directly prove this was definitely the case, there's also some evidence of other dinosaur species practiced cannibalism

Researchers have found numerous bones of the theropod Majungasaurus crenatissimus with bite marks left by its own kind. This proves that the dinosaur, which lived some 70 million years ago in present-day Madagascar, practiced cannibalism.

And then there's the mighty Tyrannosaurus rex. Among the king of lizards, cannibalism was "surprisingly common," according to the authors of a 2010 study that presents more bite mark evidence.

All told, cannibalism is still pretty common in nature — even among modern predators. Cobras and chimpanzees have shown the behavior, and of course, some humans have taken part.

"Almost no meat-eater will turn down a free meal if one presents itself," Drumheller-Horton says.

Abstract: Bite marks provide direct evidence for trophic interactions and competition in the fossil record. However, variations in paleoecological dynamics, such as trophic relationships, feeding behavior, and food availability, govern the frequency of these traces. Theropod bite marks are particularly rare, suggesting that members of this clade might not often focus on bone as a resource, instead preferentially targeting softer tissues. Here, we present an unusually large sample of theropod bite marks from the Upper Jurassic Mygatt-Moore Quarry (MMQ). We surveyed 2,368 vertebrate fossils from MMQ in this analysis, with 684 specimens (28.885% of the sample) preserving at least one theropod bite mark. This is substantially higher than in other dinosaur-dominated assemblages, including contemporaneous localities from the Morrison Formation. Observed bite marks include punctures, scores, furrows, pits, and striations. Striated marks are particularly useful, diagnostic traces generated by the denticles of ziphodont teeth, because the spacing of these features can be used to provide minimum estimates of trace maker size. In the MMQ assemblage, most of the striations are consistent with denticles of the two largest predators known from the site: Allosaurus and Ceratosaurus. One of the bite marks suggests that a substantially larger theropod was possibly present at the site and are consistent with large theropods known from other Morrison Formation assemblages (either an unusually large Allosaurus or a separate, large-bodied taxon such as Saurophaganax or Torvosaurus). The distribution of the bite marks on skeletal elements, particularly those found on other theropods, suggest that they potentially preserve evidence of scavenging, rather than active predation. Given the relative abundances of the MMQ carnivores, partnered with the size-estimates based on the striated bite marks, the feeding trace assemblage likely preserves the first evidence of cannibalism in Allosaurus.