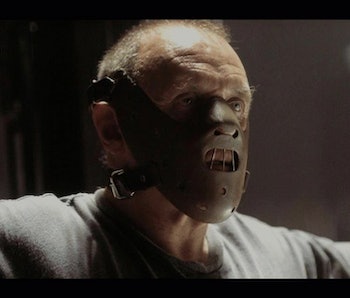 At Inverse, we believe there are no stupid questions, but there are weird questions. What better time to answer them than Halloween?

For all the cultural taboos surrounding the consumption of human flesh, we’ve spent a hell of a lot of time glorifying it. Hannibal Lecter’s penchant for human liver and fava beans made him one of the most beloved horror movie villains of all time. The continued success of The Walking Dead confirms that our zombie fetish refuses to die. We’ve even co-opted the name of the original human cookie — Soylent — for a drink we’re calling the food of the future. Is it possible that we’re just trying to muzzle a desire to eat our friends?

Not really. Culture is strong and so is an ingrained reflex. The horror of the act aside, cannibalism as a practice is simply unsafe, as it contributes to the spread of potentially fatal human diseases. Still, humans can be consumed safely. In the spirit of Halloween (and public service), Inverse talked to Rice University’s Volker Rudolf, an ecologist and cannibal expert, to find out how:

In theory, says Rudolf, one of the major risks of being a cannibal is “being injured by the victim — in defense — or eaten yourself, assuming you’re not the only cannibal around.” Hunting down a victim will inevitably involve “intimate contact,” adds Rudolf, so transmission of parasites or viruses like the flu is entirely possible. As with all meat handling, thorough washing is highly recommended.

Blood-borne diseases such as hepatitis, HIV, and Ebola can all be transmitted via cannibalism, but cooking flesh at high heat can ensure you won’t catch them. “All but prions can typically be neutralized by cooking at high temperatures,” says Rudolf.

The best-studied cannibal squad in recent history are the people of the Fore tribe in Papua New Guinea, who were known to partake in “mortuary cannibalism.” They ate muscle stripped from fresh corpse limbs — described as having “layers of fat which resembled pork” — which, though sick AF, didn’t appear to cause too much harm. But anthropologists studying the tradition’s nuances found that a disease locally known as kuru was affecting women, children, and the elderly. Turns out the “laughing disease” was actually caused by prions, which were spread when women ritualistically fed corpse brain to the very young and the very old.

Volker points out that, because diseases are most likely to be carried in the blood, safety is, ultimately, “probably not organ specific.” Intestines and innards, however, tend to carry organ-specific diseases such as hepatitis, he says. “I’d stay away from that.”

Don’t Just Try It Once

For a people that presumably has practiced mortuary cannibalism for years, it’s surprising the Fore didn’t die out earlier. Kuru takes up to 20 years to develop, says Volker, but the Fore people’s resilience to the dangers of human-eating could also be chalked up to genetics. Earlier this year, a study in Nature described the discovery of a “prion resistance gene” that was prevalent in the Fore population, theorizing that evolutionary processes naturally selected for individuals whose genes allowed them to withstand the dangers of eating brains.

“On an evolutionary scale,” says Rudolf, “The biggest risk is consuming close kin by accident, since this would reduce your future reproductive output (i.e., your fitness), so on the long term (over generations), that would be a bad strategy.”

Cannibalism in the animal kingdom is, as Rudolf described it back in 2007, “stunningly common.” And yet his study found that only two species showed evidence of cannibalism being a predominant disease transmission route: The aforementioned human cannibals passed on kuru, and lizards that ate each others’ tails spread the protozoan Sarcocystis.

A closer look at these instances showed that cannibalism only factored into disease spread if cannibals engaged in flesh eating as a group activity. “In some earlier societies, cannibalism was not a social act, in which case diseases would not have spread very well in the population,” says Rudolf.

There’s also the minor matter of what happens if the people you’re eating with are still hungry after the meat is gone. We’re all tartar to someone.

More like this
Mind and Body
Sep. 26, 2022
Going to bed before this time could boost your metabolic health
By Elana Spivack
Science
9 hours ago
You need to see the most unpredictable meteor shower peak this week
By Elizabeth Howell
Science
2 hours ago
Hubble spotted a breathtaking spiral galaxy that holds clues about the fate of the universe
By Kiona Smith
Share: