“I was always wondering what happens to the brain during spaceflight" 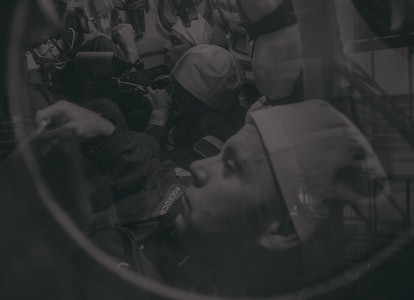 For more than 50 years, humans have been venturing out into space and yet very little is known about the toll that these journeys into the cosmos can have on the human body.

But as we prepare for longer journeys that will return humans to the Moon and possibly send them to Mars within the near future, scientists are working hard to measure the effects of spaceflight on the human body in order to help mitigate them for those longer missions.

A new study, published Thursday in The Journal of the American Medical Association, examined one of the most common symptoms that astronauts experience in space — head congestion. The research is part of scientists’ efforts to understand what happens to the brain in microgravity, and whether it has a lasting effect down on Earth.

Neuroradiologist Donna R. Roberts, M.D., from the Department of Radiology and Radiological Science at the Medical University of South Carolina, and lead author of the study, has been looking at the effects of space flight on the brains of astronauts since the early 2000s.

Roberts used to work at NASA headquarters in Washington, D.C., and noticed a dearth of data on the health impacts of working in space.

“I was always wondering what happens to the brain during spaceflight,” Roberts tells Inverse.

In order to help resolve that question, Roberts went back to medical school and decided to conduct the research herself by studying the brain.

In October, 2019, Roberts published an earlier study that looked at how spending too much time in microgravity can take a toll on astronauts’ motor skills, cognitive abilities and eyesight.

For the latest study, Roberts and colleagues looked at whether there were certain physiological changes of the paranasal sinuses and mastoid air cells associated with symptoms of head congestion. Paranasal sinuses are the four air-filled areas that surround the nose, part of the nasal cavity, located under the eyes, above the eyes, between the eyes and behind the eyes, while mastoid air cells are there to protect the ear, and regulate ear pressure.

The study compared the MRI scans of 35 astronauts before and after their spaceflight in order to look at the effects of their missions in space. Some of the astronauts had spent less than 30 days in space on the Space Shuttle mission, while others had a longer duration spaceflight onboard the International Space Station.

The results of the study were unsuspected, according to Roberts.

Astronauts generally experience symptoms related to nasal congestion, and congestion around their sinuses during their spaceflight. However, the study did not find any significant differences in those areas.

Instead, the MRI scans showed an increase in fluids within the mastoid air cells connected to the middle ear. “But they were asymptomatic with the area we found,” Roberts says.

The study suggests that this could be due to a number of different factors, including changes in pressure when they undergo extravehicular activity, better known as a spacewalk outside the ISS to conduct some maintenance work on the spacecraft.

Another hypothesis is that it could be due to the different microbial environment within the ISS that causes their immune system to change.

And finally, a more simple reasoning could be similar to what we experience during a plane landing when our ears pop.

However, it is still not clear whether these symptoms cause any long term effects in the astronauts bodies or if they return to normal once back on Earth. Part of the reason why this is unclear is that NASA does not conduct any later, follow-up MRIs on astronauts after they have returned to Earth.

These changes recorded in the new study, however, could be related to astronauts reporting changes in their vision, according to Roberts.

“In the past, there weren’t really issues or symptoms,” Roberts says. “But more recently in the past few years, astronauts have had this problem where they see vision changes, fluids pressure.”

This could be due to astronauts spending more time in a microgravity environment, which makes this type of research all the more crucial as we approach a new era in spaceflight that requires astronauts putting in longer hours. The study found more significant changes in the MRI's of astronauts who had spent more time in space.

“That’s the whole reason we want to study them in the first place,” Roberts says. “To find out what’s causing them, once we determine exactly what’s causing this, then they can develop appropriate countermeasures for it.”

“NASA is going to have to look at the data and decide where to go from there,” she adds.