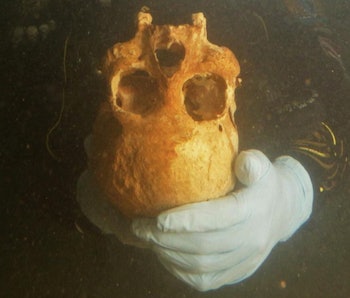 At nearly 4,300 miles long, the Tulum submerged cave system is the longest underwater cave system ever found. It is also arguably the most important when it comes to human history. Nine ancient human skeletons have been found in this underwater labyrinth. And in a study published on Wednesday, scientists announced the discovery of one more.

The newly-found skeleton, dubbed ‘Chan Hol 3,' belonged to a 30-year-old woman who died some 9,990 years ago. Thirty-percent of her skeleton was found preserved in the cave system, at the bottom of 8 meters of fresh water.

The discovery is described in a paper published Wednesday in the journal PLOS ONE.

After that discovery, lead investigator and geoscientist Wolfgang Stinnesbeck told Inverse “it looks as if the oldest osteological remains of humans in the Americas are all reported from the Tulum system of submerged caves.”

It is through analysis of these remains that scientists can get a richer, and more accurate, sense of what life was like for the first humans in the Americas. And Chan Hol 3 is helping to shed light on where we have gotten the narrative wrong.

The Tulum caves have not always been underwater. During the Last Glacial Maximum, which happened around 25,000 to 19,000 years ago, sea level was more than 100 meters lower than today. At that time, parts of the Tulum cave system were likely completely dry — making them accessible to animals and humans.

When deglaciation began, sea levels rose abruptly, submerging the caves. Today, the cave system contains a freshwater layer over seawater. The cave where this skeleton was found likely became water-filled during a period of rising sea levels 8,000 years ago — the result of global warming.

After she was discovered, Chan Hol 3 was treated with distilled water for eight months, slowly dried out, and then photographed. A uranium-thorium dating technique determined its age — a minimum of 9,900-years-old.

The team compared Chan Hol 3's skull to the skulls of 452 individuals' remains, found across North, Central, and South America — including the skulls also found in the Tulum caves. In doing so, they realized that the skulls found in the caves are more round-headed than other contemporary skulls found in Central and North America. Another telling difference between the Tulum skulls and other ancient Americans' remains is the fact that Chan Hol 3, like other Tulum skulls, has teeth with cavities, indicating a diet high in sugar. The other skulls' teeth are mostly cavity-free — suggesting they ate a markedly different diet.

Taken together, the skulls suggest that two morphologically different groups of ancient American peoples lived in this part of the world at the same time — complicating the story of early human settlement of the Americas.

The Tulum skeletons suggest that either more than one group of people reached the American continent during the same time period, or that people have lived long enough on the Yucatan Peninsula for different groups to develop distinct skull morphology.

The latter hypothesis would mean that human settlement of the Americas happened far earlier than previously thought.

It’s generally believed that humans have lived on the Yucatan Peninsula since the Late Pleistocene — between 126,000 to 11,700 years ago. But exactly when humans came to occupy the Peninsula is hotly debated. The “kelp highway” hypothesis supports the idea that the migration happened between 20,000 to 15,000 years ago, while the discovery of a Patagonian human settlement suggests people had made it to South America by at least 18,500 years ago.

Only time — and more discoveries — can reveal our true human history. And the Tulum cave system may provide many more twists in the plot: Just 932 miles of the 4,399 mile-long system has been explored, after all.

Abstract: Human presence on the Yucatan Peninsula reaches back to the Late Pleistocene. Osteological evidence comes from submerged caves and sinkholes (cenotes) near Tulum in the Mexican state of Quintana Roo. Here we report on a new skeleton discovered by us in the Chan Hol underwater cave, dating to a minimum age of 9.9±0.1 ky BP based on 230Th/Udating of flowstone overlying and encrusting human phalanges. This is the third Paleoindian human skeleton with mesocephalic cranial characteristics documented by us in the cave, of which a male individual named Chan Hol 2 described recently is one of the oldest human skeletons found on the American continent. The new discovery emphasizes the importance of the Chan Hol cave and other systems in the Tulum area for understanding the early peopling of the Americas. The new individual, here named Chan Hol 3, is a woman of about 30 years of age with three cranial traumas. There is also evidence for a possible trepanomal bacterial disease that caused severe alteration of the posterior parietal and occipital bones of the cranium. This is the first time that the presence of such disease is reported in a Paleoindian skeleton in the Americas. All ten early skeletons found so far in the submerged caves from the Yucatan Peninsula have mesocephalic cranial morphology, different to the dolichocephalic morphology for Paleoindians from Central Mexico with equivalent dates. This supports the presence of two morphologically different Paleoindian populations for Mexico, coexisting in different geographical areas during the Late Pleistocene-Early Holocene.

More like this
Science
6.21.2022 10:45 AM
Ancient stalagmites point to a massive drought that upturned 6th century Arabia
By Allison Parshall
Science
6.22.2022 8:26 PM
Yes, there are mites living on your face — and they can poop, a new study finds
By Allison Parshall
Science
7.2.2022 12:00 PM
Why is my cat scratching furniture? The answer might surprise you
By Tara Yarlagadda
Related Tags
Share: