"We're eroding the capabilities of an area to maintain life." 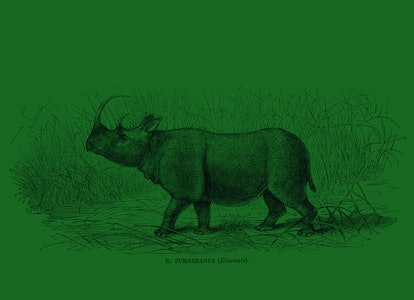 When we think of endangered species, certain animals consistently come to mind: rhinos, tigers, gorillas. But the scope of extinction is much wider: According to a new report, more than 500 land-walking vertebrates are at the brink.

Human activity is driving much of that destruction, particularly people encroaching upon places rich in biodiversity, like tropical and subtropical regions. Global conservation strategies can improve the situation for both animals and humans, say the authors of the new study, published Monday in the journal Proceedings of the National Academy of Sciences.

The benchmark of having 1,000 remaining individuals is important because, over the past century, 94 percent of the mammal and bird species to hit those low levels have subsequently gone extinct.

But even populations whose numbers are less dire may be at risk, lead study author Gerardo Ceballos, an ecologist at Universidad Nacional Autonoma de Mexico, tells Inverse.

Species with populations between 1,000 and 5,000 remaining tend to overlap geographically about 84 percent of the time with those on the brink of extinction.

That level of overlap suggests that, if nothing changes, the slightly better-off species are not far behind in their own collapse.

Ceballos and his colleagues call this "incipient regional biodiversity collapse." The idea is that it's only a matter of time before the factors devastating one species, like habitat loss, begin to affect other species in the area.

There's also something else at play, Ceballos explains: When an ecosystem is being destroyed, it stops functioning the way it's supposed to. So the demise of one species can easily spill over into other species.

"We're eroding the capabilities of an area to maintain life," Ceballos says.

Humans may even be eroding ecosystems to the point of mass extinction.

In 2015, Ceballos led a 2015 study that he says provides conclusive proof that the world is undergoing its sixth mass extinction. That research found that the number of species that had disappeared in the past 100 years was better aligned with a time period of 800 to 10,000 years — meaning species loss is accelerating.

The same factors that drive species loss — like the clear-cutting of forests or poaching wildlife — can also drive human health problems and exacerbate the climate crisis.

Mass extinction's side effects — Cutting emissions to reduce global warming may seem like a separate issue from protecting ecosystems. But the two are intrinsically linked, Ceballos says.

Ecosystems function in a way that protects the environment, and when those natural systems are broken down, the climate suffers. Research published in March 2020 found that forest fragments, partially chopped away by humans, stash away 22 percent less carbon dioxide than full forests.

Humans are among the scores of life threatened by the planet's warming temperatures. But habitat destruction has a more immediate threat to our health, too: the spread of disease.

Research shows that viruses have a better chance of spreading from animals to humans when the two come into close contact. While we still don't know exactly what triggered the ongoing Covid-19 pandemic, leading theories suggest the virus originated in bats, which are commonly traded in wildlife markets.

As Ceballos points out, the animals aren't to blame, however.

A study published in April 2020 showed that no specific group of animals is more likely to carry disease than another — even bats carry an "unexceptional" risk. But what does increase the chances of disease spread is increased interaction with humans.

Looking ahead at conservation — Efforts to protect the world's biodiversity are nowhere near strong enough, Ceballos says. He points to three overarching steps that humans need to take immediately to see a difference.

Ceballos wants nations around the world to recognize that protecting ecosystems is vital to the planet's future — so much so that countries should create joint efforts to incentivize that protection.

Borneo, for instance, is home to a dense-but-dwindling wildlife population. There, forests are leveled for agriculture, namely oil palm plantations, which are hugely lucrative. (Palm oil is an ingredient in ice cream, lipstick, gasoline, and shampoo.)

An international union, Ceballos says, could give Borneo the resources to protect the forest.

"We probably should pay Borneo not to cut any more forest," Ceballos says — essentially purchasing the land's protection.

He argues that it's possible to take these actions without upending the world's economy. Still, doing so will require collaboration at a scale far greater than we've accomplished in the past.

Ceballos is hopeful — he thinks that with a serious commitment, we could see populations begin to recover within just 5 to 10 years. But time, he says, is running out.

Abstract: The ongoing sixth mass species extinction is the result of the destruction of component populations leading to eventual extirpation of entire species. Populations and species extinctions have severe implications for society through the degradation of ecosystem services. Here we assess the extinction crisis from a different perspective. We examine 29,400 species of terrestrial vertebrates, and determine which are on the brink of extinction because they have fewer than 1,000 individuals. There are 515 species on the brink (1.7% of the evaluated vertebrates). Around 94% of the populations of 77 mammal and bird species on the brink have been lost in the last century. Assuming all species on the brink have similar trends, more than 237,000 populations of those species have vanished since 1900. We conclude the human-caused sixth mass extinction is likely accelerating for several reasons. First, many of the species that have been driven to the brink will likely become extinct soon. Second, the distribution of those species highly coincides with hundreds of other endangered species, surviving in regions with high human impacts, suggesting ongoing regional biodiversity collapses. Third, close ecological interactions of species on the brink tend to move other species toward annihilation when they disappear—extinction breeds extinctions. Finally, human pressures on the biosphere are growing rapidly, and a recent example is the current coronavirus disease 2019 (Covid-19) pandemic, linked to wildlife trade. Our results reemphasize the extreme urgency of taking much-expanded worldwide actions to save wild species and humanity’s crucial life-support systems from this existential threat.