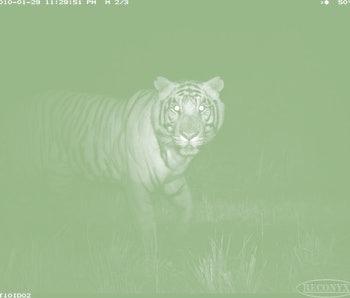 People, and their expansion into tiger territory, have already devastated tiger populations. Just 4,000 tigers remain in the wild. As Tiger King noted, there are fewer big cats out there than in captivity.

Plans to expand roads in tigers habitat in South and Southeast Asia forebode a dark future for the already endangered animals, reports a new study. Scientists argue that if we want wild tigers to survive, we'll need to reconsider how we alter the natural world.

Researchers examined the impact that building roads has on tiger populations by analyzing forecasts of global road expansion, as well as the roads that are already pervasive through tiger habitat in South and Southeast Asia.

They discovered that roads have already caused tiger populations to decrease by 20 percent, compared to what their population would be if these roads didn't exist in tiger habitat. In turn, the size of that effect will grow if road building continues as planned.

This finding was published Wednesday in the journal Science Advances.

The team examined road density, distance to the nearest road, and relative species abundance to illustrate the effect that roads have on tiger habitat — especially in blocks of land that are considered crucial for tiger populations to rebound, called Tiger Conservation Landscapes (TCLs).

Currently, 57 percent of TLCs are within 3 miles of a road. Meanwhile, 43 percent of where tigers breed is within that same proximity. This negatively impacts both tigers and their prey, say the scientists — and that negative impact will only be bolstered if there are new roads.

TCLs span about 450,000 square miles over 13 countries. In those areas, 15,000 miles of new roads are planned in the coming years and predicted to be completed by around 2050. That includes projects like China's Belt and Road Initiative.

Conservationists are pushing back against that plan because of its effect on tigers and other local wildlife. The roads would overlap with the ranges of 265 threatened species — including 81 endangered and 39 critically endangered species — according to a 2017 report from the World Wildlife Fund.

"Roads are proliferating worldwide at an unprecedented rate, with potentially severe impacts on wildlife," the study states. "Given that roads will be a pervasive challenge to tiger recovery in the future, we urge decision-makers to make sustainable road development a top priority."

Road densities are, on average, 34 percent greater in non-protected portions of TCLs than in strictly protected parts, indicating that road density increases with the relaxation of protection status. This suggests that implementing protection status to wildlife ranges is an important part of conserving habitat.

The importance of tigers — Tigers are what's known as an umbrella species, meaning their overarching presence has direct effects on the rest of their ecosystem. These fierce predators control populations of local herbivores, providing natural protection for the forested area.

Plus, since tigers need large spaces and healthy forests to thrive, conditions that generally bode well for tigers are also good for all local fauna and flora.

A lone tiger needs more than 10 square miles of uninterrupted forest, stocked with clean water and plenty of prey. As the new research points out, protecting tigers means conserving forest area, and building roads through nature preserves can hinder that effort.

Abstract: Roads are proliferating worldwide at an unprecedented rate, with potentially severe impacts on wildlife. We calculated the extent and potential impacts of road networks across the 1,160,000-km2 , 13-country range of the globally endangered tiger (Panthera tigris)—a conservation umbrella species. We found that roads were pervasive, totaling 134,000 km across tiger conservation landscapes (TCLs), even in tiger priority sites and protected areas. Approximately 43% of the area where tiger breeding occurs and 57% of the area in TCLs fell within the road-effect zone. Consequently, current road networks may be decreasing tiger and prey abundances by more than 20%. Nearly 24,000 km of new roads will be built in TCLs by 2050, stimulated through major investment projects such as China’s Belt and Road Initiative. Given that roads will be a pervasive challenge to tiger recovery in the future, we urge decision-makers to make sustainable road development a top priority.