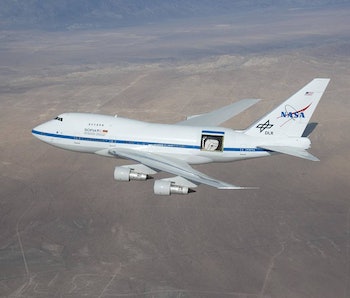 Say your goodbyes now to what is perhaps the oddest, most successful Earth-based NASA telescope of all time.

NASA may be sending SOFIA, a flying telescope mounted on a Boeing 747 plane into early retirement. It is one of the casualties of an otherwise stellar budget proposal for the fiscal year 2021, the agency announced Monday.

SOFIA has spent nearly 10 years of observing planets, comets and asteroids in our Solar System.

But despite a whopping $25 billion ear-marked for the agency — a12 percent increase from this year’s NASA budget — SOFIA did not make the cut.

Most of the money is instead directed towards a new era of space travel, marked by upcoming missions to return humans to the Moon, and to send the first human mission to Mars. These shiny ambitions come at the cost of other, less glamorous missions — and that includes SOFIA, or the Stratospheric Observatory for Infrared Astronomy, to give its full title.

SOFIA launched in 2010, with the plan to keep it flying until the early 2030’s. But NASA’s 2021 budget proposal calls for its complete elimination from our skies.

As far as telescopes go, SOFIA is pretty strange. The observatory is based on a modified airplane, a Boeing 747SP. But unlike the planes we crowd on, this one has a single passenger — a 2.7-meter reflecting telescope. SOFIA flies for 10 hours at a time before landing so a ground-based crew can maintain its instruments.

Aboard its steed, SOFIA cruises through Earth’s stratosphere, or the planet’s second major layer of atmosphere. There, its far-infrared instruments collect crucial scientific data on the Solar System and beyond.

The incredible science of SOFIA

Flying at 38-45,000 feet above ground level allows SOFIA to observe the Solar System in a way that other telescopes can not.

It hovers above the part of Earth’s atmosphere that blocks infrared light, so SOFIA gets a unique view of planets, stars, and galaxies from a global vantage point.

Because of its unique imaging capabilities, SOFIA has caught some rare planetary occurrences that astronomers might have missed.

One such instance happened in June 2015, when SOFIA captured Pluto during a rare, eclipse-like event.

On June 29, Pluto was positioned between a distant star and the Earth, casting a faint shadow over our planet. It was a prime opportunity to conduct some scientific analysis. And there was only one telescope capable of positioning itself in the right spot to make those observations — SOFIA.

In 2018, SOFIA jetted off to New Zealand to conduct observations of Saturn’s largest moon Titan, best viewed from the Southern Hemisphere.

The data SOFIA captured on that journey characterized Titan’s atmosphere as it passed in front of a distant star, revealing how Titan's atmosphere changes with the changing of the seasons on Saturn.

And SOFIA has shed light on more than just planets and their accompanying moons.

In February 2019, the telescope also traced cosmic dust — the remains of massive stellar explosion Supernova 1987A.

Unfortunately, all of this cool science comes at a price. SOFIA’s annual cost of operations is a little over $80 million, making it the second most expensive mission in NASA’s entire astrophysics program.

“The nature of the program, which relies on observations using an expensive platform (an airplane) with expensive consumables (jet fuel), results in low cost efficiency compared to most observatories,” NASA said, explaining why they plan to cut SOFIA's trip short.

The agency expects the James Webb Telescope, which is scheduled to launch in the year 2021, to make up for SOFIA’s absence.

On the chopping block:

Two Earth science missions, the Plankton, Aerosol, Cloud, ocean Ecosystem (PACE) mission, and the Climate Absolute Radiance and Refractivity Observatory (CLARREO) Pathfinder are designed to conduct ocean and climate monitoring. Together, they would have shed light on our changing climate and how it affects the ocean and the atmosphere. But the satellites are yet to get off the ground — and they may never do so, thanks to this budget plan.

The new budget would also cut NASA’s Office of STEM Engagement, which offers educational grants in the field of science and technology. But the agency doesn't seem too bothered by the idea, saying other programs will take its place.

“The discontinuation of NASA's education grant programs is unlikely to have a significant impact on the Nation’s overall STEM research and capacity building, which would continue to be supported through other means,” NASA said, referring to internships and robot competitions.