How coronavirus is crippling the contraceptive industry

“The global condom shortage is already upon us”: 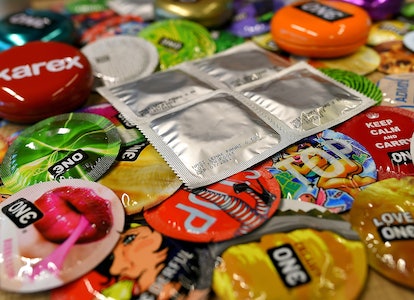 The Covid-19 pandemic has sparked a global condom shortage, causing manufacturing to screech to a halt and paralyzing distribution pathways, condom manufacturers and family-planning experts say.

Without condoms, often the cheapest or only form of birth control in much of the world, people may have trouble practicing safe sex, and lose control of a fundamental decision: When, or if, to have a child.

“The global condom shortage is already upon us, and with it a plethora of sexual health problems are threatening,” Paul Liang, a marketing director at Karex, the world’s largest condom manufacturer, tells Inverse.

Karex produces 20 percent of the world’s condoms, but due to a country-wide lockdown, the Malaysian company has not produced a single condom for the past ten days. That’s 100 million missing condoms.

Today, the company resumed operations at 50 percent capacity, and is rushing to keep up with orders and fill the gaps left from factory shut-downs in China and India as well, Liang says.

At this stage, most pharmacies in the United States and Europe likely have enough inventory to keep condoms on the shelves, Chris Purdy, president and CEO of DKT International, a leading family-planning organization, predicts.

Now, a PSA: There is no need to stock up on condoms the way people have been hoarding toilet paper, Mary Jane Minkin, a practicing gynecologist at Yale Medicine, tells Inverse.

While the problem may not yet be acute, the contraceptive industry at large is being crippled by the COVID-19 crisis, Purdy says. The pandemic is disrupting the import of both raw and packaging materials, as well as shipping, distribution, and selling pathways.

“The supply chains are contracting, they are shutting down, and they are delayed in very serious ways, and this is impacting, if you can imagine, every single link of the supply chain,” Purdy says.

Over the next few weeks, communities and clinics outside the US and Europe, from India to the Democratic Republic of the Congo, will be hit hard, Purdy says.

“We are going to see a global shortage of condoms everywhere, which is going to be scary,” Karex CEO, Goh Miah Kiat, told Reuters this week.

"My concern is that for a lot of humanitarian programs deep down in Africa, the shortage will not just be two weeks or a month. That shortage can run into months.”

“During this period, our facilities are only able to operate at 50 percent capacity in line with government mandate,” Liang, the Karex executive explains.

Some of the other major suppliers, specifically those in China, have not been in operation for a few months now and are just resuming production, he says.

“As a result, the world is definitely looking at an impending condom shortage which will pose a major setback for the battle against HIV/AIDS,” Liang says.

From factory to consumer

The Covid-19 crisis also makes getting condoms and contraceptives to consumers challenging, Liang and Purdy say.

Flights, freights, and other forms of shipping are “way down,” Purdy says, and ports in India and Malaysia are clogged.

“There are things that we would normally be shipping back and forth around the world that are coming to a standstill,” Purdy says.

A lack of condoms could mean people take “unnecessary risks” when it comes to sexual health, Liang says. In turn, this could result in an increase in the rate of sexually transmitted infections or unwanted pregnancies in places where alternative means of family planning or safe sex aren't available, he says.

Inverse asked Minkin what people should do if they can’t get their hands on condoms or contraceptives like birth control pills.

“I wish I had an answer for people. I mean, it's convenient to say, ‘Well just don't have sex,’ but we know that's not gonna happen.”

For now, Minkin suggests making sure you have an immediate supply of condoms and consider employing emergency contraception, or the "morning after" pill, if you need it. Alternatively, you can look into longer lasting birth control methods like an IUD, or birth control vaginal ring, if it is available. But it is important to note that both of these methods will not protect against sexually transmitted infections.

She doesn't predict people in the United States or Europe having trouble filling a prescription for contraceptives, or buying the condoms they need.

The US won’t bear the brunt of these supply chain issues, Purdy agrees.

“My guess is that there are probably fairly strong inventory levels in the US," he says.

"For the manufacturers who make condoms, the US market is so important that they will prioritize the US over everybody else in the world.”

Liang also predicts the United States and other developed nations won't be as affected as some of the other countries Karex supplies.

“This is because more developed nations have access to alternatives in the form of either pharmaceuticals or other forms of family planning like IUDs," Liang says.

"These are typically more expensive methods that are not available in more impoverished nations that really rely on condoms as the only source of contraception and family planning.”

At this point, it isn't clear how production and shipping delays will trickle down to consumers, in the US, Europe, or beyond.

But what is clear is if you do have access, it's important to use condoms when you need them. Safe sex, during a pandemic or not, saves lives.

"We need to take care of ourselves as well as Covid risks," Minkin says. "Don't lose sight of basic medical health."

More like this
Mind and Body
Jan. 31, 2023
Is the Bivalent Covid-19 Booster Still Worth It? Here's What the Latest CDC Data Shows
By Katie MacBride
Mind and Body
Feb. 5, 2023
How Your Diet Could Help (or Hurt) Your Aging Brain
By The Conversation and Sara N. Burke
Mind and Body
Feb. 1, 2023
Why the future of periods could be none at all
By Elana Spivack
LEARN SOMETHING NEW EVERY DAY.
Related Tags
Share: