How to sleep better: 5 hacks for more rest and less stress

“Sleep is probably the single most important health behavior we do every day.” 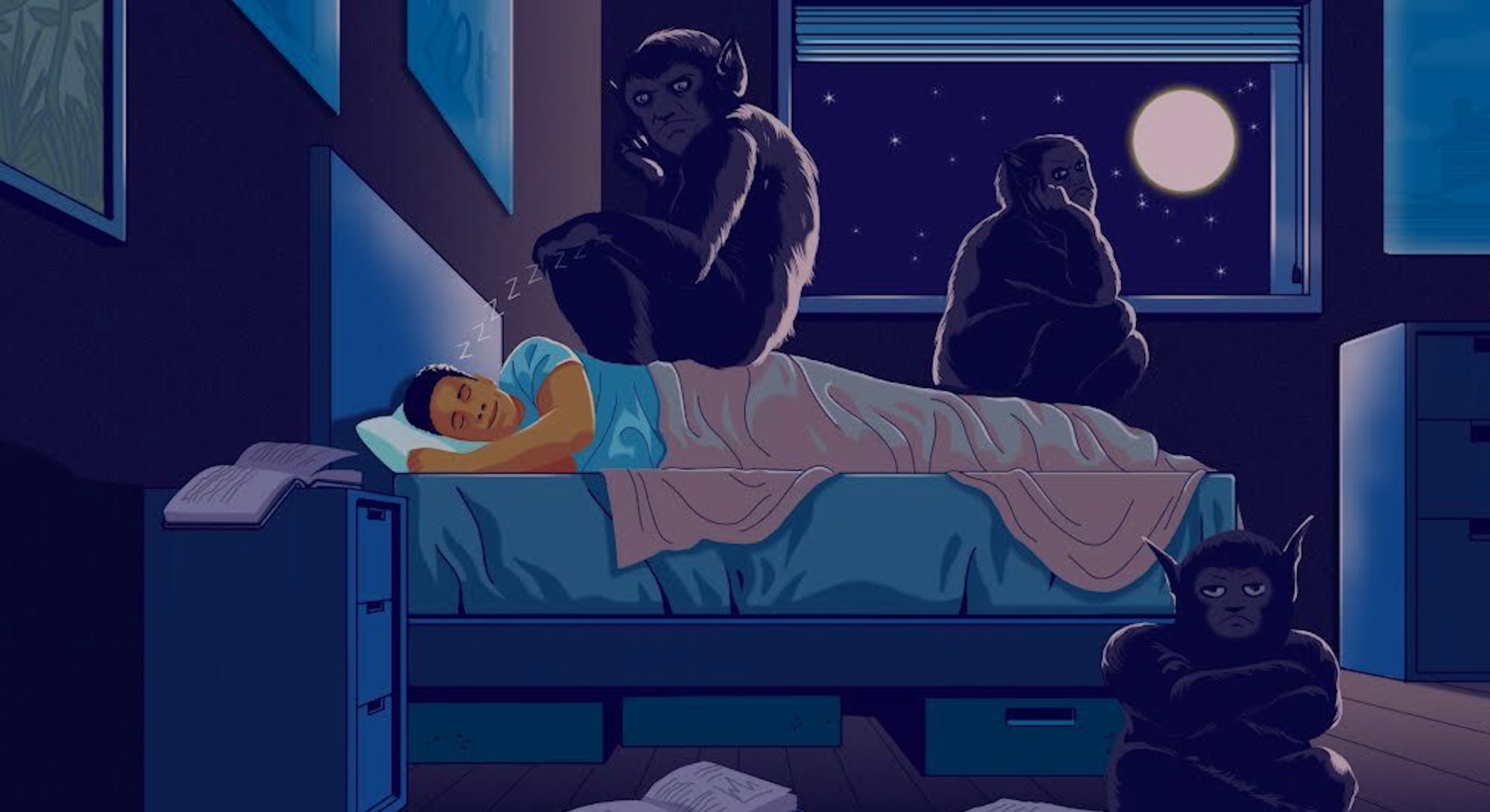 She went to bed every night between 9 and 10 p.m. and slept for a blissful nine hours. Unfortunately, Wolthuizen’s sleep hasn’t been consistent for the three years she’s been in college.

Today, 21-years-old and entering her final year of university in Minnesota, the stress and anxiety of school make it difficult to sleep through the night. And when she changed her major in her sophomore year, her course load of mostly morning classes flipped to an afternoon schedule.

“I stay up later at night and sometimes it takes me a long time to fall asleep, so I end up getting a lot less sleep than I had planned,” Wolthuizen tells Inverse.

She’s not alone: Research suggests more than half of all college students aren’t getting enough quality sleep. Not enough sleep, in turn, can severely influence the brains’ ability to process stress and anxiety and convert short-term memory to long-term learning.

“Sleep is probably the single most important health behavior we do every day.”

Roxanne Prichard, director of the Center for College Sleep at the University of St. Thomas, tells Inverse the average human should spend about one-third of their life sleeping.

“Sleep is probably the single most important health behavior we do every day,” Prichard says. “Pretty much all systems are enhanced when you get enough sleep and are impaired when you don’t get enough.”

Luckily for the restless, there are actionable steps you can take to protect this critical part of health. Here, experts explain the science of sleep to Inverse — and offer five ways you can easily make sleep a better experience.

Scientists are working to understand why stress, anxiety, and sleep are so closely linked on a neurological level. So far, it’s understood that sleep is a natural anxiolytic, or anxiety inhibitor, as long as you’re getting enough of it each night.

This is because, “sleep targets the same brain regions that make us susceptible to anxiety in the first place,” Eti Ben Simon, a neuroscientist at the University of California, Berkeley Center for Human Sleep Science, tells Inverse.

Sleep acts as an emotional reset button for the brain, Prichard explains. Furthermore, stressful situations trigger activity in the amygdala, a nucleus deep in the brain that reacts to emotions, especially negative ones, Ben Simon says.

The prefrontal cortex, a part of the brain behind the middle of the eyebrows, regulates how you feel about the event after it’s over. In anxious people, these parts of the brain have abnormal activity, which means these people are more emotionally reactive to stressful situations and have a more difficult time coping with a stressful event after it’s over. This can result in nights awake, ruminating.

The brains of those who don’t sleep enough can end up resembling these anxious brains.

For example, in a 2019 study published in Nature Human Behavior, Ben Simon and colleagues discovered that the neural pathways supported by sleep are connected to anxiety. The study team found that after just 24 hours of sleep deprivation, people who were not normally anxious saw a 30 percent increase in anxiety. Brain scans also revealed that the emotionally reactive parts of the brain became even more active due to the lack of sleep.

At the same time, the prefrontal regions of the study participant’s brains — areas that regulate emotional responses — were less active. This means more emotions and less regulation.

The science of bad sleep

According to Ben Simon, there are two main stages of sleep that scientists link to the brain’s ability to cope with stress: deep sleep and rapid eye movement (REM) sleep. Both target one of the two parts of the brain that handle how a person responds to stress — the prefrontal cortex and the amygdala.

Deep sleep — If you sleep for eight hours, the first three to four will be dominated by a deep, dreamless sleep. The heart rate and blood pressure slow and the mind rests. The brain is filled with synchronized, high amplitude, slow-changing waves.

The more of these waves a person has, the better they are able to recalibrate the prefrontal cortex, which regulates how we think about a stressful situation after it’s finished.

REM sleep — The second half of a night’s sleep is dominated by REM sleep, which tones down the emotional reaction a person has to a stressful event. “We need both halves of dominant sleep to really improve mental health,” says Ben Simon.

Because sleep cycles are very structured, it’s extremely difficult to make up for lost sleep. For example, if you cut your sleep short, you may lose half of your REM sleep but none of your deep sleep — meaning your amygdala gets less sleep than it needs to recalibrate.

According to Ben Simon, future research will hopefully pinpoint whether or not there is a specific amount of sleep loss a person can have before it affects their anxiety. For now, it’s safe to say that getting enough sleep on a regular basis is the best approach.

“Getting a full night's sleep is really the only way you can ensure you are getting all the stages you need,” she says. College-aged students should aim for eight to nine hours of sleep every night. If you can be up for 14 hours straight without needing excess caffeine, you’re getting enough sleep.

“If you typically get 8 hours of sleep but you pull an all-nighter, you may sleep for 10 or 12 hours the next day but not the full 16 you would need to make up for the sleep lost,” Ben Simon says.

From the mood regulation standpoint, it typically takes two or three nights to get back to baseline after losing sleep, she explains.

Getting enough sleep isn’t the only obstacle. Quality matters, too.

But college settings tend to be challenging environments for sleep. Dorms in particular can be hot, crowded, and noisy — and socializing often takes priority over shut-eye.

“You need an on-ramp to slow down first.”

“College students are also still in the age range that are more likely to be a night owl, so it’s a lot easier for them to go to sleep after midnight, but it’s harder to wake up by 7 a.m. — which a lot of them have to do for classes or athletics,” Prichard says.

Despite challenges, students should make sleep a priority, Prichard says. Here’s how:

Set a time for yourself to stop working, turn off the lights, and do something calming that sets the stage for sleep. Going to bed at roughly the same time every night makes it easier to get all the sleep stages you need.

2. Power down 30 minutes before going to bed

One of the most important things you can do to ensure a good night’s sleep is to turn off your computer and silence your phone at least a half-hour before hitting the sack.

“You can’t immediately go from driving on the highway to driving on a side road,” Prichard says. “You need an on-ramp to slow down first. You need a transition period to sleep, too.”

In addition, numerous studies have shown blue light is bad for sleep. One meta-analysis, published in 2019 in The Journal of Biological and Medical Rhythm Research, found two hours of blue light in the evening suppressed melatonin, a sleep hormone. However, melatonin levels recovered within 15 minutes of shutting down screen time.

3. Block out sound and light

College dorms can be noisy, bright places. Wearing earplugs and an eye mask are simple tools that can help create a better environment for sleep.

4. Only sleep in a couple of hours on the weekend

It’s fine to catch extra Z’s on the weekend, but sleeping in more than two hours past your weekday wake-up time can make it difficult to get back on schedule once Sunday night arrives.

While sleep is necessary to help the brain cope with stress, stress itself can also seriously impair our ability to sleep. Prichard recommends using meditation or breathing exercises to help combat your body’s response to stress and improve your chances of getting rest.

While these actions are a good place to start, in the future, personalized data may inform specific interventions. New sleep research is focused on what societal and individual behavioral aspects need to change in order to better manage stress and promote good sleep habits.

“Sleep is probably the most powerful health tool you have at your disposal. The hard part is figuring out how to change human behavior,” Prichard says.

Optimize is Inverse’s wellness-focused back-to-school guide, providing students of all ages with the science-backed tips they need to prepare their minds and bodies for returning to school.