"This should give everybody hope." 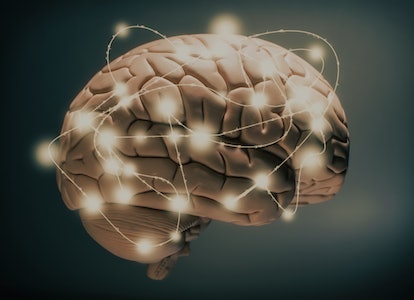 An option for people who don't see successful results from standard depression treatments like talk therapy or antidepressants is transcranial magnetic stimulation (TMS). Research shows that this non-invasive technique, which uses electromagnetic fields to stimulate nerve cells in the brain, can fill the therapeutic void left when other treatments fail.

For the 30 percent of clinically depressed people who are, so far, treatment-resistant, SAINT may be a possible solution — if further studies replicate these astonishing early findings.

"This is really a way of turning on a brain region that's been turned off by depression in a personalized way," co-author Nolan Williams, a neuropsychiatrist at Stanford University, tells Inverse.

"Part of my job as a depression doctor is to give people hope. I think that's what keeps people alive who have chronic treatment-resistant depression. Certainly, this should give everybody hope that this, or something like it, is coming."

The results were published Monday in the American Journal of Psychiatry.

Speeding up treatment — Typical TMS treatments zero in on a brain area called the dorsolateral prefrontal cortex. This region regulates executive functions, such as recalling memories or inhibiting inappropriate behaviors.

With SAINT, the researchers narrowed their focus to a circuit between the dorsolateral prefrontal cortex and the subgenual cingulate, a part of the brain that is overactive in people experiencing depression.

Targeting this circuit and activating the dorsolateral prefrontal cortex can tamp down the excess activity driving depression, the team says.

They also ramped up the speed of magnetic stimulation. In typical TMS sessions, doctors blast the brain with 600 pulses per session. With SAINT, they upped that rate to 1,800 pulses per session, a rate that has been used previously to treat neurological disorders like Parkinson's disease.

TMS typically requires six weeks of once-daily sessions. However, in this study, participants underwent a five-day course of SAINT: 10 sessions per day of 10-minute treatments, with 50-minute breaks in between.

The researchers also evaluated the participants' cognitive function before and after the SAINT treatment and found no negative side effects. Some participants experienced some fatigue or headaches after sessions, but none lasted, Williams says.

After treatment, participants' ability to switch between mental tasks and to solve problems improved — a typical outcome for people who are no longer depressed.

For some patients, mood scores indicated they were no longer depressed after a single day of SAINT treatment. For others, it took all five days.

On average, three days of the therapy were enough for participants to have relief from depression.

One month after the therapy, 60 percent of participants were still in remission from depression.

"It is much more dramatic than anything that we've seen with oral antidepressants or conventional depression treatments," Williams says.

SAINT's numbers are staggering, as no other therapies for treatment-resistant depression have broken remission rates of 55 percent in open-label testing, Williams says. With conventional TMS, about 50 to 60 percent of people experience a clinically significant improvement in symptoms while a third go into remission.

Open-label testing is a type of clinical trial where the researchers and participants know which treatment is being administered. This approach contrasts with a blinded experiment, where information is withheld to reduce bias.

"Electroconvulsive therapy is thought to be the gold standard, but it has only an average 48 percent remission rate in treatment-resistant depression," Williams says. "No one expected these kinds of results."

Larger, long-term studies are underway to determine how long the antidepressant effects may last. In this study, improvements from a single five-day course lasted from a few months to a full year, based on how treatment-resistant a person was before they tried SAINT.

Williams says a second course of SAINT treatment is likely to reignite the anti-depressant effects.

"The beauty is it looks like the readmission rate is close to 100 percent," Williams says. "So you can develop maintenance schedules to keep them there."

Williams' team is currently conducting a larger, double-blind double-blinded trial in which half the participants are receiving fake treatment. He hopes the trial will provide further evidence of the positive effects of SAINT, and ultimately, lead to FDA approval within the next few years.

"The goal is to have this out and available as soon as humanly possible. That's our main focus."

Methods: Twenty-two participants with treatment-resistant depression received open-label SAINT. fcMRI was used to individually target the region of the left DLPFC most anti-correlated with sgACC in each participant. Fifty iTBS sessions (1,800 pulses per session, 50-minute intersession interval) were delivered as 10 daily sessions over 5 consecutive days at 90% resting motor threshold (adjusted for cortical depth). Neuropsychological testing was conducted before and after SAINT.

Conclusions: SAINT, an accelerated, high-dose, iTBS protocol with fcMRI-guided targeting, was well tolerated and safe. Double-blinded sham-controlled trials are needed to confirm the remission rate observed in this initial study.