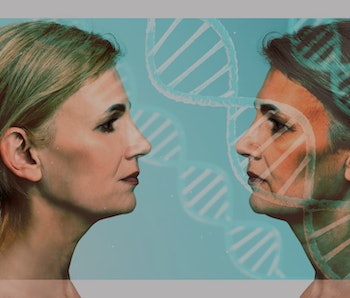 Like the plastic tip at the end of a shoelace, telomeres are stretches of DNA that cap the ends of chromosomes. Each time a cell divides, telomeres get shorter — a process that is part of natural aging. Shorter telomeres are also linked to mood and anxiety disorders — but new research suggests there may be a way to slow down the process.

The answer may lie in a common treatment for mood and anxiety disorders: cognitive behavioral therapy, or CBT.

This psychological treatment is associated with increased telomerase and glutathione peroxidase activity, a new study suggests. These two enzymes protect telomeres by adding bases to their ends and shielding them from oxidative stress — mitigating telomere shortening.

The findings were published this week in the journal Translational Psychiatry.

Kristoffer Månsson, director of the Psychiatry Research School at the Karolinska Institute, tells Inverse that, on average, individuals with psychiatric disorders have shorter telomeres. Which begged the question: Could treating the psychiatric condition affect telomere shortening?

A small 2013 study hinted that the answer might be yes. It found that telomerase activity increases when people with depression take antidepressants, suggesting that the treatment could slow telomere shortening.

Månsson and his team hypothesized that CBT — an intervention that doesn’t rely on medication — would also increase telomerase activity and influence the process of cellular aging.

They evaluated 46 people diagnosed with social anxiety disorder while they received nine weeks of online CBT treatment. The participants provided blood samples prior to beginning therapy and then again after therapy ended. An often-used indicator of the rate of cell aging is telomere length measured in blood leukocytes.

All of the participants were not in therapy before the experiment, and those who typically took a psychotropic medication agreed not to use beta-blockers during the study period and to maintain a stable dosage of whatever other prescriptions they have. The participants also did not change their level of physical exercise during the study, which is thought to affect cellular aging and telomerase activity.

While a nine-week study is too narrow a time frame to actually see changes in the length of the participants’ telomeres, the researchers did observe that CBT simultaneously and greatly reduced participants’ anxiety levels, while increasing telomerase and glutathione peroxidase activity. How well the therapy helped their mental health was directly related to how active these enzymes became.

What’s next for CBT and cells

The results suggest that CBT can help treat social anxiety and protect cells against oxidative stress and cellular aging. The findings support the idea that the enzyme increase is directly related to anxiety symptom reduction, Måsson says.

Although it is considered very effective, CBT only treats about 45 percent of people with mood and anxiety disorders. These conditions are also linked to an increased risk of developing other physical illnesses. More research is needed to understand whether rapid cellular aging may play a role in the development of mental and physical conditions.

“We should be cautious talking about causation” when it comes to telomere length and mental health stress, he says. But “one idea is that the rate of attrition in telomeres are accelerated in psychiatric patients.” It may also be possible that a person’s telomeres are shorter before the onset of their disorder, and this may make them more susceptible to develop the problem in the first place, he says.

Either way, studies like this point the way for new treatments based on an individual’s biology that can both protect individual’s mental and psychical health, Måsson says.

Telomere attrition is a hallmark of cellular aging and shorter telomeres have been reported in mood and anxiety disorders. Telomere shortening is counteracted by the enzyme telomerase and cellular protection is also provided by the antioxidant enzyme glutathione peroxidase (GPx). Here, telomerase, GPx, and telomeres were investigated in 46 social anxiety disorder (SAD) patients in a within-subject design with repeated measures before and after cognitive behavioral therapy. Treatment outcome was assessed by the Liebowitz Social Anxiety Scale (self-report), administered three times before treatment to control for time and regression artifacts, and posttreatment. Venipunctures were performed twice before treatment, separated by 9 weeks, and once posttreatment. Telomerase activity and telomere length were measured in peripheral blood mononuclear cells and GPx activity in plasma. All patients contributed with complete data. Results showed that social anxiety symptom severity was significantly reduced from pretreatment to posttreatment (Cohen’s d = 1.46). There were no significant alterations in telomeres or cellular protection markers before treatment onset. Telomere length and telomerase activity did not change significantly after treatment, but an increase in telomerase over treatment was associated with reduced social anxiety. Also, lower pretreatment telomerase activity predicted subsequent symptom improvement. GPx activity increased significantly during treatment, and increases were significantly associated with symptom improvement. The relationships between symptom improvement and putative protective enzymes remained significant also after controlling for body mass index, sex, duration of SAD, smoking, concurrent psychotropic medication, and the proportion of lymphocytes to monocytes. Thus, indices of cellular protection may be involved in the therapeutic mechanisms of psychological treatment for anxiety.