Scientists debunk the most dangerous myth about rubber bullets

"They can hit people at the same impact as live ammunition." 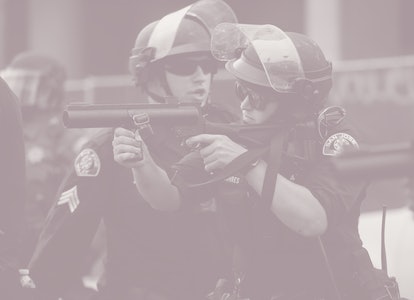 As police clash with protestors over the killings of George Floyd, Breonna Taylor, Ahmaud Arbery, and others, we’ve seen the resurgence of the rubber bullet, an old-school method of crowd control.

Rubber bullets are called "non-lethal" or "less than lethal" methods of force, but scientific research debunks those descriptors.

Rubber bullets are just one member of a larger family of kinetic impact projectiles or (KIP). These include bean bag bullets (cloth bags filled with smaller projectiles) and sponge rounds (bullets with blunt tips). Importantly, rubber bullets not always completely made of rubber – many have a metal core.

The purpose of a rubber bullet is to translate the kinetic energy (energy in motion) generated by a weapon into the body of a person. In theory, their design is intended to limit their ability to penetrate skin.

A review published in 2017 in BMJ Open examined 26 papers on rubber bullet injuries, covering a total of 1,984 injuries. It found that 300 of those injuries resulted in permanent disabilities, especially if the bullet struck the head or neck. Within this group, 53 people (or 3 percent) died from rubber-bullet related injuries.

A 2002 study in The Lancet on the use of rubber bullets by Israeli police cautions that rubber bullets “should not be considered a safe method of crowd control.”

Rubber bullets, dangerous when aimed directly at people, can still cause lasting bodily damage even if they are not fired point-blank.

This is because they are a meeting point between power and inaccuracy, says Michele Heisler, a professor of internal medicine at the University of Michigan and the medical director of the Physicians for Human Rights.

“When they are fired at close range, the levels of lethality and patterns of injury of many types of KIPs are similar to those of live ammunition,” Heisler tells Inverse. “Most simply can not be used safely against crowds.”

How are rubber bullets supposed to be used? – Rubber bullets were developed in the 1970s by the British government to subdue protestors during The Troubles – a period of rebellion in Northern Ireland.

The first person to die from a rubber bullet wound was an 11-year-old boy named Francis Rowntree, who was shot in the head. Seventeen people died from rubber bullet injuries during The Troubles, The Irish Times reported in 1997.

In theory, rubber bullets were supposed to be less dangerous because they’re large, bulky, and intended to move at slower speeds than traditional ammunition, explains Heisler. But if fired at close range “they can hit people at the same impact as live ammunition,” she explains.

Guidelines from the Geneva Human Rights Platform suggest that rubber bullets should be directed at the lower body (the guidelines actually caution against “skip-firing” or shooting at the ground first, because it makes them too unpredictable). The potential for a rubber bullet to ricochet, Heisler explains, makes for a dangerous situation.

“At least aiming them below the knees and lower is better than directly aiming them higher,” Heisler says.

But that’s not enough to prevent lasting harm. Damage caused by a bullet comes down to where it hits you on your body, what that bullet is made of, and how hard it hits you in the first place.

If a rubber bullet is shot at the ground first (or is “skip-fired”), there’s no predicting where it might end up. If you’re in close range you might still get hit hard in a vulnerable place.

The 2002 Lancet study of 201 rubber bullet injuries found that, on average, they were distributed randomly over the body surface, though they most common injuries were found in the limbs. One patient still died from a penetrating ocular injury.

One of the most persistent myths around rubber bullets is that they can’t penetrate the skin. That's a misconception, says Heisler.

One of the most startling cases of penetrating injury is when the rubber bullet hits someone in the eye (as has happened to some journalists covering the George Floyd protests). If a rubber bullet hits an eye, it can shatter the eyeball, as well as the surrounding bones. A study on ocular injuries from rubber bullets published in 2003 in Nature found that they could impart permanent vision damage.

Even if a rubber bullet doesn't penetrate the skin, it can still cause bruising of the lungs or heart, as well as “possibly fatal injuries such as bleeding, pneumothorax (a collapsed lung) or heart attacks,” Heisler adds. In the 2002 Lancet study, researchers found that 61 percent of patients had blunt injuries and 39 percent had penetrating ones.

“Blunt trauma can be as lethal as penetrative injuries,” adds Heisler.

There’s no such thing as a bullet that’s not intended to create some type of destruction. The rubber bullet is no exception — it might even be more dangerous than it gets credit for.

More like this
Mind and Body
Jan. 30, 2023
Swapping Cigarettes for Vaping May Help You Quit — but There’s a Catch
By Elana Spivack
Mind and Body
Jan. 23, 2023
Can spicy food boost our gut health? Here's what the science says
By Katie MacBride
Science
Jan. 21, 2023
A deadly fungal plague swept the world of The Last of Us — is it realistic?
By Tara Yarlagadda
LEARN SOMETHING NEW EVERY DAY.
Related Tags
Share: